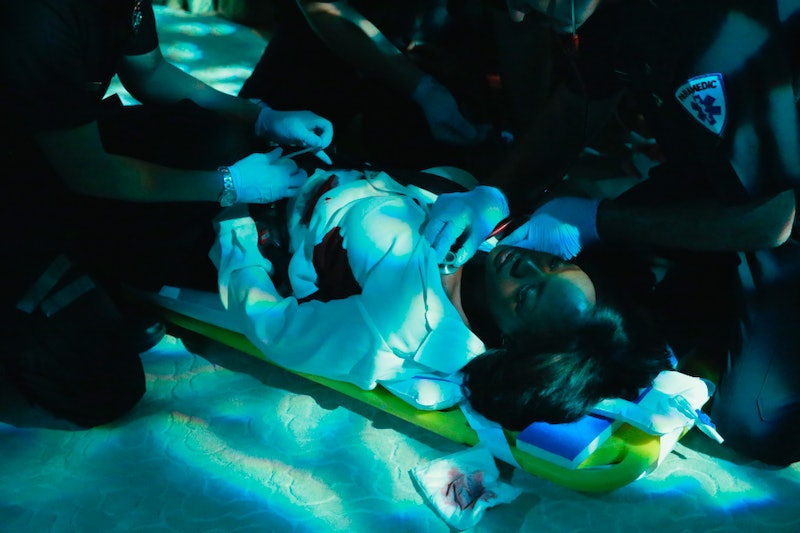 The first half of How to Get Away with Murder consisted of many mysteries, but perhaps none greater than who shot Annalise Keating? At some point this season, every single character has been a suspect of Annalise's assailant. There are arguments for why each character could be guilty of sending Annalise to the hospital, but it was the winter finale of How to Get Away with Murder that revealed that Wes shot Annalise, and it was partly because she asked him to, and partly because she finally revealed Rebecca was dead.

When the season opened with Annalise seemingly dying on the floor of the Hapstall mansion, it appeared as if someone finally had enough of Annalise's rules and took matters into their own hands. At first, it seemed like Wes, seen running away from the mansion, was guilty. Then, at another point, Connor was seen leaning over her body saying, "This is all your fault." Bonnie, who was seen running from the scene, was hurt when Annalise showed Asher the tapes of her being molested. And Frank, well Frank went from grieving friend to totally in-check hit man after leaving Annalise at the hospital. Like I said, everyone looked guilty at some point.

So, how did Wes get the gun in his hand? Well, earlier in the episode, Asher ran over Emily Sinclair with his car in a parking lot. He called Bonnie, who called Annalise, and they brought Emily's body to the Hapstall house to cover up her murder, framing it on Catherine. Part of that plan involved making the crime scene look chaotic, to throw off the police.

In order to do that, Annalise decided that if she was shot she'd be able to make it look like more of a struggle. The only problem was that despite the amount of hatred some of the students have for Annalise, no one wanted to shoot her. So, Annalise took it a step further and revealed that Rebecca has been dead this whole time and she was lying to him while he was crying to her. It riled Wes up enough to shoot her in the torso, and he almost did it again, but we cut to a flashback before we know how it ended.

So, where does this leave Annalise and Wes in the future? Annalise knew what she was doing when trying to get Wes amped to shoot her, so I don't know if there will be much — for lack of a better term — bad blood on her end. As for Wes, I don't know if he is every going to be able to trust Annalise again. He's been back and forth trusting her throughout the seasons, and this might finally be the straw that breaks the camel's back.