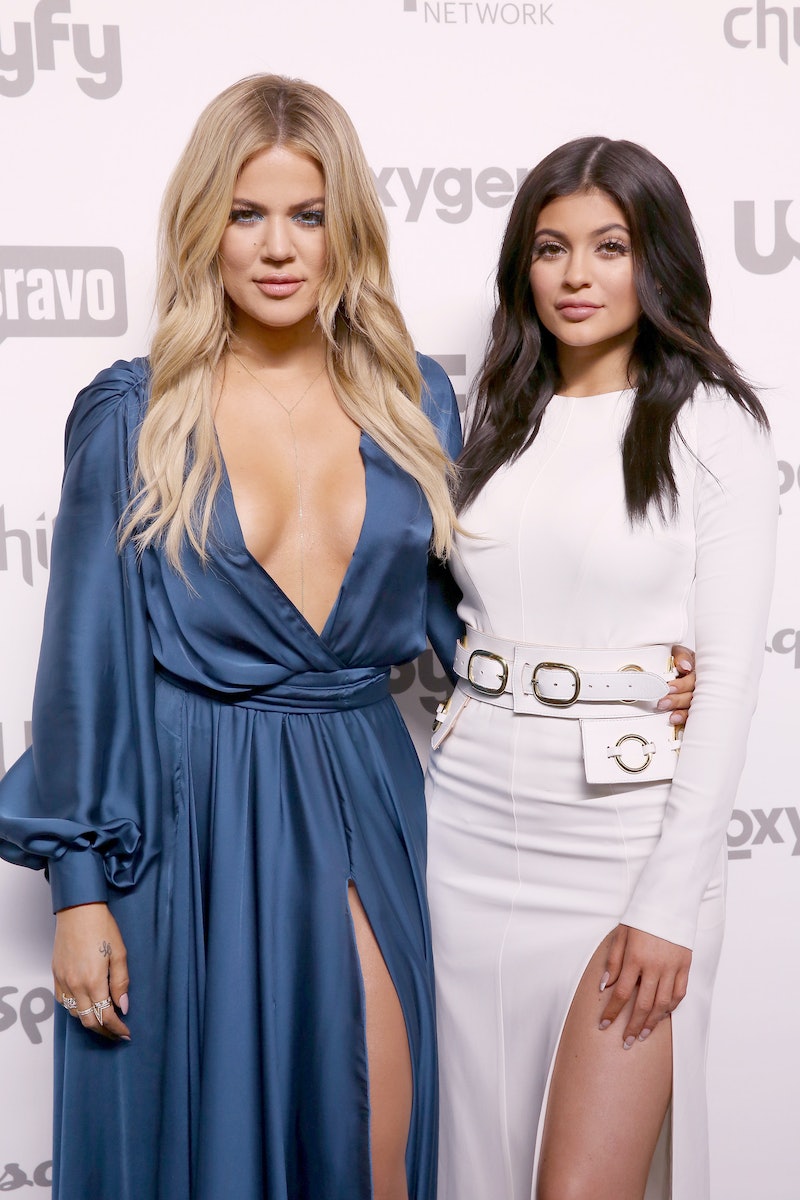 Oh, siblings! One minute, you're fighting over borrowing each other's clothes, but an hour later, you're goofing around like nothing happened. Anyone with brothers and sisters knows that bickering is inevitable. Sure, you love each other, but that doesn't mean you don't fight. Proving that the sibling struggle is real, Khloe Kardashian and Kylie Jenner had a mini Thanksgiving rivalry on Twitter. Not only was it hilarious, but it was also incredibly relatable. Apparently there's going to be a major cook-off in the Kardashian-Jenner household on Thursday.

So, what happened? It all began when Kylie Jenner posted a tweet clearing up pregnancy rumors. She wrote, "They've been saying I'm pregnant for one year now... One year. Let's get it together lol." Ever the outspoken sister, Khloe Kardashian jokingly snapped back, "you're so fat and pregnant obviously." She also added, "no one talks about you and this mysterious year." That's when things got personal. Jenner claimed Khloe Kardashian just wanted her sweet potato soufflé recipe. To be honest, I would love to hear that recipe! Everything is better in soufflé form.

Continuing the back-and-forth, the older sister said, "The cook off is real my friend!!!!!" Jenner responded, "I'll see you in the kitchen lil girl." Get it? That last part is such a diss, since Jenner is actually the younger sibling. Touché.

Khloe Kardashian and Kylie Jenner aren't the only pair of relatable siblings. Here's a round-up of other celebrity family moments that will have anyone with brothers or sisters nodding in agreement.

Kylie Jenner posted this Snapchat video, where Khloe Kardashian is covering older sister Kourtney with guacamole, as mom Kris Jenner yells in the background. Who hasn't had a food fight with their siblings?

Taylor Swift and her brother Austin had a competitive Easter egg hunt, where they channeled their inner Monica and Ross from Friends. There is no competition more serious than who can find the most eggs.

Ariana and Frankie Grande are constantly supporting one another. This video of them dancing to "Gangnam Style" perfectly captures the goofy dance-offs siblings have. You know, the ones where you would never dance like that in front of anyone else, except family.

4. Bragging On Their Behalf

When Gigi Hadid's little brother Anwar appeared in Seventeen, of course she posted an Instagram to celebrate. Sure, siblings fight, but they also support one another in their accomplishments.

Another moment from the Swift siblings. Who didn't grow up wearing matching outfits? Sure, usually this is a childhood pastime, but you're never to old for flannel onesies.

On Nick Jonas's birthday, big bro Joe posted this Instagram. Siblings have an entire arsenal of embarrassing photos that can be whipped out at any time.

7. Singing Along In The Car

The ladies of Haim sang along in the car to Faith Hill's "This Kiss." There's also a cameo from their honorable fourth sister, Taylor Swift.

All of these celebs prove that sibling bonding (and bickering) is universal. It doesn't matter how famous you are, you'll probably still throw guacamole in each other's faces.