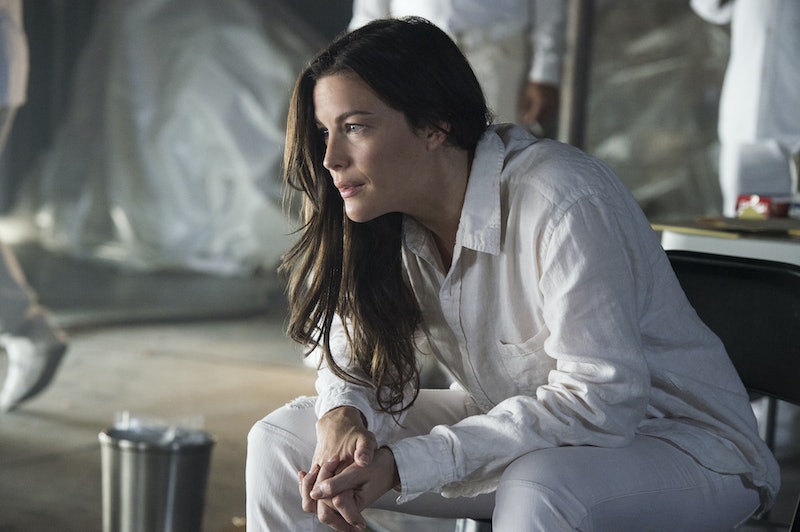 Last week’s trippy episode of HBO’s The Leftovers ended with protagonist Kevin Garvey crawling his way out of his own grave, resurrected after a harrowing trip to the afterlife where he did battle with the ghost of Patti Levin. If you were hoping for a continuation of this bizarre storyline… well, you should have known better, considering that this series is by showrunner Damon Lindelof of Lost notoriety. Instead of focusing on Kevin and his return from the dead, the penultimate episode of Season 2 took an unexpected detour, filling viewers in on what characters like Megan Abbott and Tommy Garvey have been up to while Kevin & Co. have been adjusting to life in Jarden, TX. So what has Meg been up to? Nothing good, as it turns out…

Before this Sunday’s episode, titled “Ten Thirteen” (as in October 13th, the day before the Sudden Departure), the only time we had seen Meg this season was in a brief scene in the third episode, when she raped Tom and then proceeded to almost light him on fire after he was discovered helping Guilty Remnant members escape the cult. And before this episode, the only bit of the character’s life we’d seen before she joined the Guilty Remnant was one morose dinner date with her fiancé in the series premiere.

“Ten Thirteen” began by filling in some of those gaps: Meg was from a wealthy family, and on the day before the Sudden Departure she was in the middle of planning her expensive wedding with her domineering mother over lunch when her mother suddenly keeled over and died — while Meg was in the bathroom doing bumps of cocaine, no less. We soon learned that Meg spent most of the next two years seeking a psychic who could tell her what her mother wanted to tell her shortly before she died… a journey which ultimately led Meg to Miracle National Park.

Isaac warned Meg that she would be disappointed in the answer; but after he proved his legitimacy by referring to her mother’s aversion to walnuts, Meg demanded he tell her anyway. Although we didn’t get to hear her mother’s parting message, it was clear that Isaac was right: Meg was disappointed. After a chance meeting with Evie Murphy, Meg left Jarden in a fury, spitting on the ground before boarding the tour bus.

Apparently Meg was never able to let go of her animosity towards the miraculous town, since we quickly learned that she was planning some sort of attack against the new American mecca. Meg has officially gone rogue from the Guilty Remnant, defying the direct orders of her higher-ups and leading her local chapter not to a Heroes’ Day parade as she was instructed, but to Texas instead.

On her way, the rogue leader picked up an unexpected travel companion: Tommy Garvey. We knew the young man had had a falling out with his mother, when Laurie showed up in Jarden looking for Tom. But now we know why: he gradually became disillusioned with their Holy Wayne-esque con and, after a tense argument with Laurie, she slapped him. Tom abandoned his mother and their work together and instead sought solace in the arms of his rapist, and joined her on her road trip to Miracle.

So heading into the Season 2 finale, “I Live Here Now,” every one of our scattered main characters has converged in Jarden on the even of the anniversary of the Sudden Departure. Obviously something massive and game-changing is about to go down. We may not know exactly what Meg’s plan is yet, but we know it involves a trailer, plastic explosives, and the bridge that leads into Miracle National Park. Given the steadily mounting tensions of the last few episodes, I think it’s safe to say that not everyone is going to make it out of this impending conflict alive…