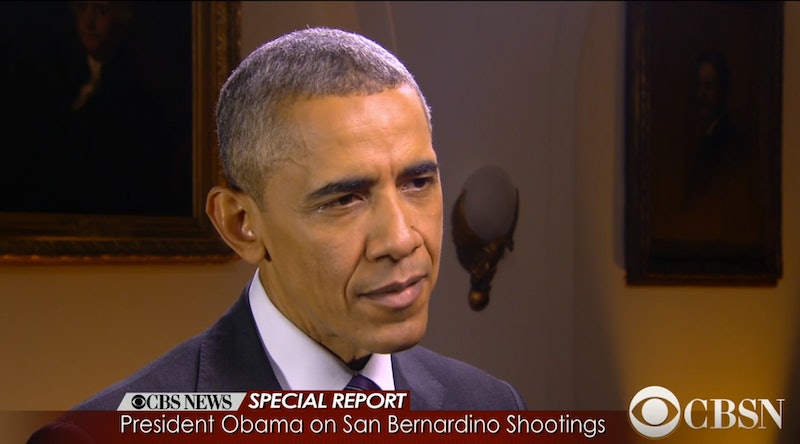 Earlier: On Wednesday afternoon, President Obama reacted to the shooting in San Bernardino, California, which took place earlier that morning. According to reports, the devastating shooting occurred in the Inland Regional Center, a facility for individuals with developmental disabilities, and killed at least 14 people and about 17 were injured. The San Bernardino Police Department confirmed that it is an active shooter situation and asked that people stay away from the area. As reported by the Los Angeles Times, the shooting may have occurred during a holiday party being held by "county workers" unrelated to the center, according to Keith Neilson, vice president of the Inland Regional Center's board of trustees.

While the story is still unfolding, politicians quickly turned to Twitter to show support for victims, as well as discuss stricter gun control. Later in the afternoon Obama spoke to CBS News' Norah O’Donnell at the White House, reminding us that these events aren't normal and never should be, emphasizing the horrific amount of mass shootings in the U.S. compared with the rest of the world. "We should never think that this is something that just happens in the ordinary course of events. Because it doesn't happen with the same frequency in other countries," he said.

Here's more from his interview with CBS News:

We have a pattern now of mass shootings in this country that has no parallel anywhere else in the world. There are some steps we could take, not to eliminate every one of these mass shootings, but to improve the odds that they don't happen as frequently. Common sense, gun safety laws, stronger background checks.

For those who are concerned about terrorism, some may be aware of the fact that we have a no fly list where people can't get on planes. But those same people who we don't allow to fly could go into a store right now in the United States and buy a firearm and there's nothing that we can do to stop them. That's a law that needs to be changed.

So my hope is that we're able to contain this particular shooting. We don't yet know what the motives of the shooters are, but what we do know is that there are steps we can take to make Americans safer. And that we should come together, in a bipartisan basis at every level of government, to make these rare as opposed to normal. We should never think that this is something that just happens in the ordinary course of events. Because it doesn't happen with the same frequency in other countries.

If you want your voice heard now, there are five easy ways to get involved in the fight to end gun violence.