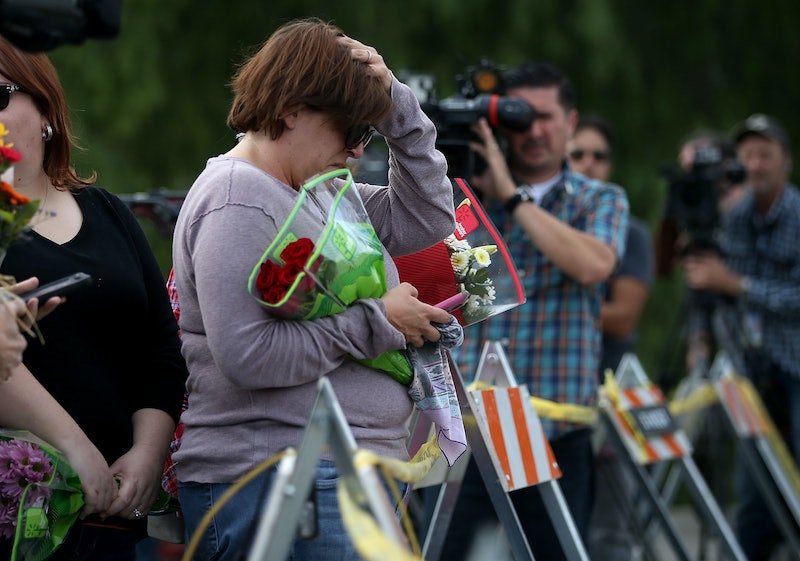 The aftermath of Wednesday's deadly shooting in San Bernardino continues to play out, and sadly, it’s one that we’re all familiar with. Mass shootings are inevitably followed by a combination of outrage, sadness, and political opportunism — but ultimately, when the event fades from the headlines, the status quo remains unchanged. You may find this depressing, infuriating, or both, but the situation isn’t completely hopeless: There are a several ways to donate to the San Bernardino shooting victims’ families.

Mass shootings are astonishingly commonplace in the United States — they happen more than once a day on average, according to the Washington Post's calculations. Because they’re so frequent, their post-scripts have become tragically routine. Politicians send their “thoughts and prayers” to the families of the victims, while others point out that “thoughts and prayers” are not nearly enough. President Obama excoriates Congress for not passing laws that could help stop mass shootings, prompting the NRA and similar folk to wail, erroneously, about the government trying to take away America’s guns.

The frequency with which innocent Americans are killed by armed assailants is nothing less than a national disgrace, and while it’s extremely difficult for any one individual to affect a nationwide sea change, giving to the families who are suffering in the wake of the shooting is a concrete way to materially improve an otherwise horrible situation. Here are a few of them.

Renee Wetzel is a stay-at-home mom and member of a young mothers group called the Lil’ Mamas. Her husband, Michael, was killed in the shooting, and the Lil’ Mamas have launched a YouCaring fund to help Renee provide for her six children.

Support For Summer And Savannah

Robert Adams was among the 14 people killed in Wednesday’s shooting; he’s survived by his wife, Summer, and daughter Savannah. Summer’s friends are crowdsourcing funds to help ease the family’s financial stress during the grieving process.

Nicholas Thalasinos was among the victims of the San Bernardino shooting, and a GoFundMe page has been set up to help his wife, Jennifer Thompson-Thalasinos, pay for her husband’s funeral and related costs.

Jennifer Stevens was shot in the stomach on Wednesday and underwent surgery. Thankfully, she’s in stable condition, but hospitals are expensive, and a friend of Stevens’ mother has set up a GoFundMe campaign to help the family pay for Jennifer’s medical costs.

This story will be updated with more donation pages as they become available.