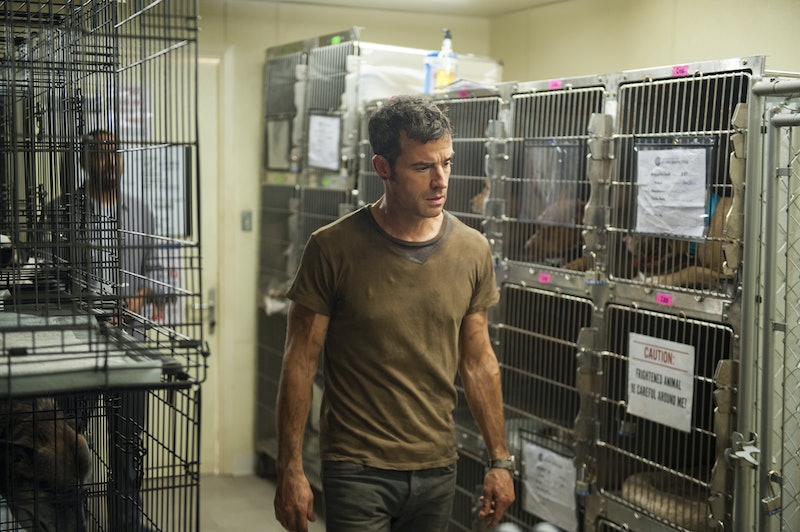 Boy, Kevin just can't catch a break, can he? The Season 2 finale of The Leftovers picked up right where we left off two weeks ago — before the detour to catch up with Meg and the Guilty Remnant — with Kevin crawling out of his own grave, resurrected after his sojourn to the afterlife. Having successfully exorcised himself of Patti's spirit, he returned triumphantly to our earthly plane... and was promptly shot to death about an hour or so later. Yes, that's right; Kevin Garvey died again ... but did it stick this time?

Our protagonist had only just arrived home, covered in dirt and granted a new lease on a Patti-free life, when John Murphy and his fellow firefighters hauled him away. It turned out that Kevin's palm print was a match for the one on Evie's car, just as we knew it would be. But, rather than take Kevin to the police station or anywhere approximately official, John takes the suspect, in private, to the Jarden dog impound. John promises Kevin that he will let him take his dog home if Kevin just tells him where his daughter is. But Kevin can only tell him the truth: He has no idea.

It seems that when Kevin woke up from his journey through purgatory, he awoke with all of his memories intact, including of the night he jumped into the lake with a cinder block tied around his ankle — the same night Evie and her friends vanished into thin air. He told John that he watched the group of young girls stage their own disappearance before he jumped. John struggled to believe this. Why would his own daughter run away from home, given how much she loved her family? "Maybe she didn't," Kevin answered. Didn't what? "Love you."

And that's all it took to make John pull out his gun and shoot Kevin point-blank in the chest. For the second time this season, Kevin fell to the floor, very much dead.

However, the first glimpse of that water-filled tub was all it took to let us know that Kevin's story was far from over. Just like when he drank Virgil's poison, Kevin woke up naked in the bathtub in the same hotel room from "International Assassin." This time, instead of the spy's suit, he chose the Mapleton officer's uniform. In the hotel bar, he met the same man who was guarding the bridge into Jarden on his way to drown Patti in the well. What would he have to do to get home this time? Simple: sing some karaoke.

Kevin reluctantly took the stage, spun the wheel, and started singing a mournful rendition of Simon & Garfunkel's "Homeward Bound." The lyrics took on a strange potency for Kevin's tribulations. Just as he finished the final chord... he come to, gasping on the floor of the animal shelter. He stumbled disoriented through the streets of Jarden, now strewn with wreckage after Meg's plan essentially destroyed the town. He made his way into the now-abandoned urgent care and attempted to patch himself up. And, who should find Kevin there but the man who shot him.

Having seen Evie for himself in the meantime, John now knew that Kevin had been telling the truth. He patched his next-door neighbor up and carried him home. John was anxious to go inside his own house, not knowing if any of his own family would be waiting for him. Kevin told John that he was always welcome in their house. And on that gracious note, Kevin walked inside to find the family he so longed for all gathered in one place, waiting for him: Jill and Laurie, Nora and Lily, Tom (who had rescued Nora and Lily from a stampeding horde of pilgrims), and Matt and Mary (who had finally awoken from her coma after yet another earthquake).

And Season 2 of The Leftovers ended on two simple words, spoken by Nora to Kevin: "You're home." A surprisingly hopeful ending to what's been a frequently bleak and tragic show. Is that the end? While I hope HBO decides to bring this show and its amazing cast back for a third season, showrunner Damon Lindelof has crafted a satisfying ending if this does end up being the end of the road for The Leftovers.