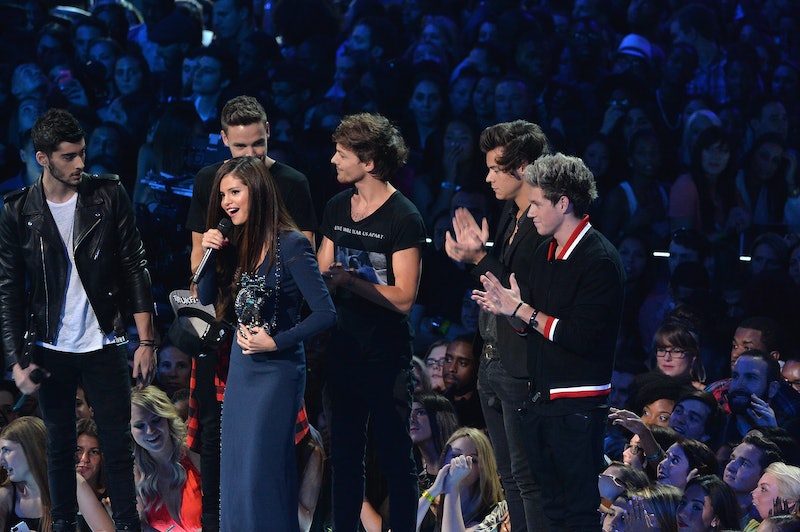 Remember back in November when One Direction and Justin Bieber both released new albums on the same day? It sparked a friendly rivalry between the boy band and the "Sorry" singer. Well, it looks like these guys have something in common once again — a certain love interest. Over the weekend, rumors surfaced that Selena Gomez hooked up with 1D's Niall Horan. Reportedly, Gomez and Horan attended Jenna Dewan-Tatum's birthday bash in Los Angeles on Friday. E! News claims an eye witness saw these two exhibiting quite a bit of PDA. According to their witness, here's what went down:

Gomez and Horan were all over each other—they were seen dancing close together all night, kissing on the lips and hugging a lot.

Hmmm, very interesting! The news site also added that neither party has commented on the matter. Although it's hard to tell for sure whether this is just a rumor, it does appear that both Gomez and Horan attended Dewan-Tatum's party. A friend posted a picture of them in the photo booth, so in the very least, they were definitely hanging out. But are these two really dating? This isn't the first time they've been the subject of rumors. In February 2014, Gomez and Horan spent Valentine's Day weekend together in London. Plus, they also went to dinner later that summer. Is this the behavior of close friends or does it mean there's something more going on here? Honestly, it could go either way.

It's worth noting that Selena Gomez gave Niall Horan a special shoutout when guest-hosting a segment on iHeartRadio in November. When talking about One Direction's "Drag Me Down," she said, "Gotta shout out Niall, he's one of our best friends! He's so unbelievably kind and deserves everything he has." The phrase "best friends" seems to suggest they're close, but not in the way people are claiming. Still, friendships do sometimes blossom into something more. So although I'm skeptical, let's not rule it out completely.

Amidst all of this, Jelena romance rumors continue to live on. Why? Justin Bieber keeps posting throwback photos with Gomez, and reportedly serenaded her with a rendition of "My Girl" a few weeks ago. Is Bieber still just clinging onto hope, or is there still something between them? If her hit song is any indication, it seems like she's "so sick of that same old love." Yet Bieber posted another Jelena #tbt late Saturday night, so it's certainly sending mixed messages.

This is all a bit confusing, but last month, Gomez announced she's "definitely single" and dating a little bit. So I'd have to guess that even if she's spending time with Horan, it's not anything super serious — at least not yet. For now, fans will just have to wait and see what happens next.

More like this
Selena Gomez Has Been Spotted Having Fun With A Top Film Producer
By El Hunt
Selena + Chef Season 4 Was Filmed At Hannah Montana's Old Malibu House
By Jake Viswanath
Leona Lewis & Husband Dennis Jauch Welcomed Their First Child
By Darshita Goyal
Who Is Camila Cabello Dating? She's Getting Cozy With Lox Club CEO Austin Kevitch
By Radhika Menon
Get Even More From Bustle — Sign Up For The Newsletter