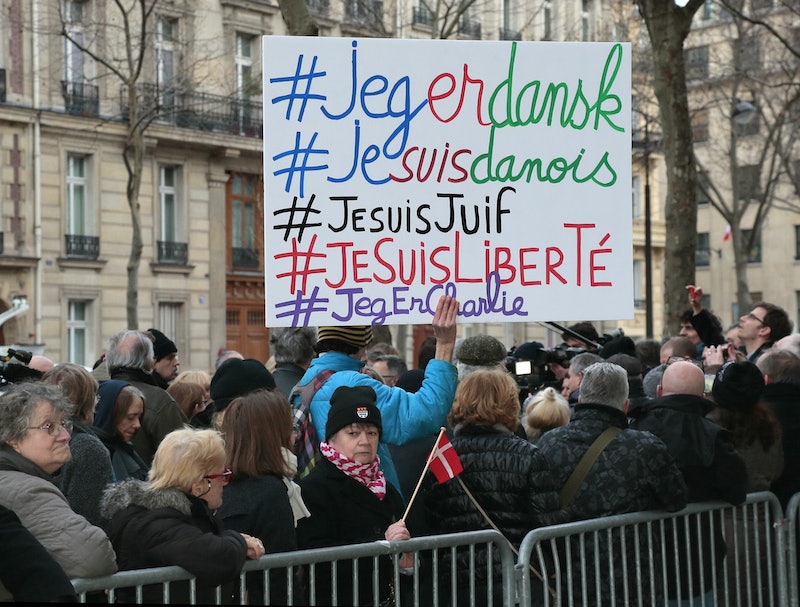 Since the dawn of social media, sites like Facebook and Twitter have always provided a forum for users to air their opinions and send messages to the world. In any given month this year, Twitter has had more than 300 million active users. Also in any given month, the world has given those Twitter users no shortage of important things to tweet about — whether it's a huge win for equal rights in the United States or a tragic attack on freedom in Paris. Through the ups and the downs, the most influential Twitter hashtags of 2015 show just how important social media has become to modern-day activism.

Being the free-speech-loving country that we are, it's no surprise that many of the most popular hashtags of the year came from events in the U.S. Throughout the year, tweeters shared messages of support for marginalized groups like racial minorities, transgender men and women, and same-sex couples. Like practically no technology before them, social media platforms like Twitter and the idea of the hashtag have given these groups and their allies a way to network, organize, and express themselves publicly. That's not to say that all of the important conversations have centered around the U.S. On the contrary, social media has also allowed international populations to come together in support of each other and in protest of radical ideologies. Now, perhaps more than ever, these are the conversations we need to be having — on Twitter and in life.

In January, a violent attack carried out by Islamic terrorists at the offices of satirical magazine Charlie Hebdo in Paris inspired #JeSuisCharlie and #JeSuisParis. The hashtag became a global cry for peace nearly 10 months before even more violence, this time a series of attacks across the city of Paris, reignited the conversation. It's been a dark year for the City of Light, but the overwhelming international support voiced with #JeSuisParis and #PrayforParis have hopefully at least taught us that the fight against ISIS and other extremist groups isn't solely an American phenomenon, but rather an international priority.

Unfortunately, #BlackLivesMatter has been a trend for more than a year — unfortunate, not because of the hashtag or its meaning, but rather because of the length of time that the issue it evokes has remained a prevalent problem. The hashtag truly shows how a simple social media message can come to embody an entire movement. What began as a hashtag after the deadly shooting of Michael Brown in Ferguson, Missouri, in 2014 has transformed into the name of an activist organization and a popular rally cry at protests throughout the country. It has also inspired other, similar hashtags, including #MuslimLivesMatter and #SyrianLivesMatter.

In June, the U.S. Supreme Court ruled that gay marriage bans were unconstitutional, making same-sex marriage legal in all 50 states. The ruling not only started a massive series of celebrations across the country, but it also inspired a memorable conversation online, with #LoveWins and #MarriageEquality taking over Twitter. Twitter even temporarily introduced rainbow emojis to round out the hashtags.

In recent weeks, there has been a loud debate, particularly among the Republican and Democratic presidential candidates, over the welcoming of Syrian refugees into the U.S. In fact, this debate has taken place in Europe, too, where thousands of refugees have already been relocated. Some think sheltering refugees is risky thanks to the (unlikely) potential that a radical terrorist could use refugee routes to enter a foreign country. Many, however, have campaigned using #RefugeesWelcome to encourage compassion.

In September, 14-year-old Ahmed Mohamed was removed from his Texas school and arrested for building a clock that officials thought resembled a bomb. Much of the rest of the country, including @POTUS, found this ridiculous and supported the young student with #IStandWithAhmed. According to Twitter, the event sparked a conversation of more than 370,000 tweets in six hours.

For what could be the first time in history, women's sports received overwhelming recognition and support during FIFA's Women's World Cup this summer. Tweets about #FIFAWWC were viewed 9 billion times from June 6 to July 5. In fact, the broadcast of the final game between the U.S. and Japan (which the U.S. women won!) was watched more in the U.S. than any other soccer game in history, men's or women's. This year, the U.S. women's team proved that #SheCan and she will dominate Twitter and the field.

In a world full of selfies and #MCMs, it's refreshing to see that the most powerful hashtags can serve as tools for important conversations and grassroots activism. Social media's power is in its ability to spread news and identify trends instantaneously — and it seems like that power grows with each new year. Hopefully, we'll be tweeting more about female sports wins and less about tragic terrorist attacks in the coming year.

More like this
Iran Has Issued A Death Sentence Over Mahsa Amini Protests
By Catharina Cheung, Darshita Goyal and Maxine Harrison
People Are Flocking To The Hive Social App Following Twitter’s Changes
By Kaitlyn Wylde and Alexis Morillo
Read Dan Levy's Heartbreaking Message After The Club Q Shooting
By Stephanie Topacio Long
Joe Lycett Just Took HIs David Beckham Qatar Protest To A Whole New Level
By Sophie McEvoy
Get Even More From Bustle — Sign Up For The Newsletter