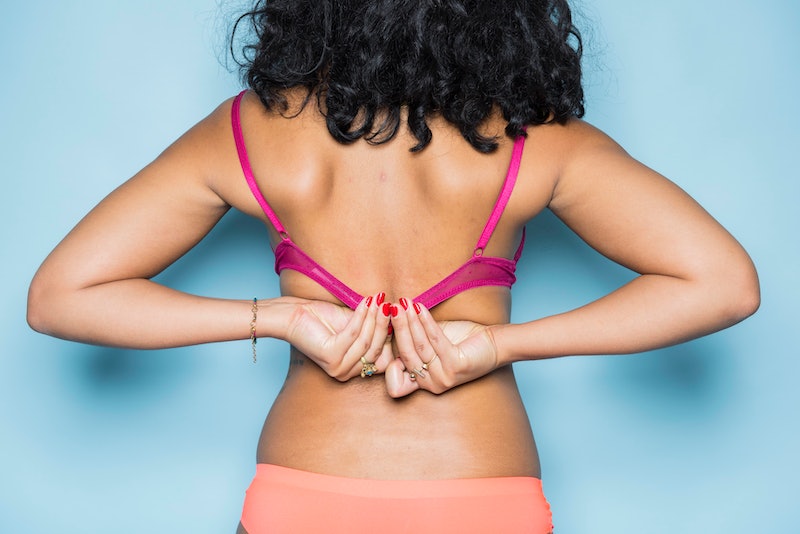 When I was growing up and the girls in my class started wearing bras, it seemed like the presence or absence of a brassiere was a marker of someone's maturity. Later on, I learned more supposed truths about what your bra says about you: Sexy undergarments mean you're slutty; a lack of bra makes you less put-together; and so on and so forth. This is just one of many ways women are judged by how they dress, but the truth is that nothing about a woman's clothing or what's below it says anything about what kind of person she is.

Many of our culture's ideas about wearing and not wearing bras stem from the assumption that women's choices are all about pleasing men. So, once and for all, let's clear things up: They're not. Believe it or not, many women make decisions every single day that do not have anything to do with how they think men will react. Sorry, patriarchy, but women may choose or not choose to wear bras entirely based on how it makes them feel.

Now that we've cleared that up, here are some ways that your bra does not define you.

1. Wearing A Bra Doesn't Make You Less Of A Feminist

Most bra owners know there are reasons for wearing them other than pressure from the patriarchy. For example, some of us feel more secure with an extra layer of clothing blocking our nipples from others' gazes (the opposite of wearing bras to appease men), and some wear them to keep everything still when we're moving or exercising. Even if women do wear bras to improve their physical appearance, that still doesn't make them less feminist, because wanting to look good is understandable — and not always related to patriarchy, either. And here's a fun fact: feminists did not, in fact, burn bras at the 1968 Miss America Pageant protest. Some did criticize them as methods of confining women to patriarchal beauty standards, but they are only confining if we have to wear them — not if we simply choose to.

As Bustle's Marlen Komar writes, visibly not wearing a bra can make you feel like "a walking siren," soliciting the attention of everyone you pass on the street. It's no wonder we feel this way when revealing clothing is often blamed for provoking sexual misconduct. In reality, however, you are not responsible for anyone's reaction to what you wear. Nobody has the right to take your lack of bra as a sexual invitation, and it would be misguided to do so since there are so many other reasons women choose not to wear bras. After all, most men don't wear bras, and people don't tell them they may be provoking unwanted attention.

3. Your Bra Or Lack Thereof Doesn't Indicate How Masculine Or Feminine You Are

4. The Type Of Bra You Wear Doesn't Mean You're Looking For Attention

We are taught to believe that if someone wears a pushup bra, a padded bra, or a bra with a colorful design, it's because she wants everyone to look at her boobs. But maybe she feels more confident that way, or finds the style more comfortable, or likes the way it looks in the mirror. Again, not everything women do is about men — or anyone else.

5. Lingerie Is Not Always Objectifying

Yes, lingerie ads often objectify women. Underwear ads can certainly objectify men as well. But this does not mean that any individual choosing to wear undergarments they find sexy is objectifying themselves. Maybe they enjoy knowing something they find aesthetically pleasing is underneath their clothes, even if it's not visible to anyone else. Or maybe their partner finds lingerie aesthetically pleasing and they want to please them. The problem is when we disproportionately expect women to visually please others and equate women's worth with their ability to appeal to the male gaze. But what we put on in our own bedrooms — or bathrooms or wherever we do or don't put on bras — is nobody else's business to police.