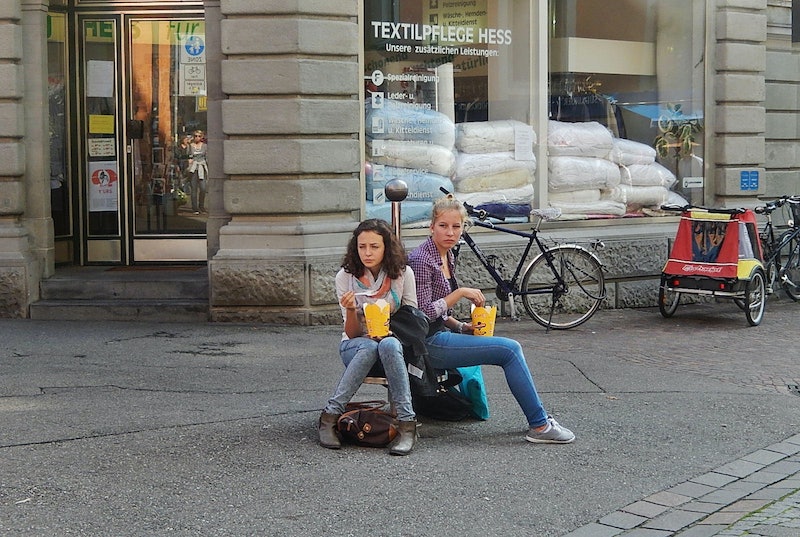 There's no question that growing up in the '90s was wildly different from growing up today — if for no other reason than that we witnessed the technology boom that gave rise to today's super-connected crop of kids. So it's only natural getting in trouble in the '90s was way different than it is today, too. Never is this more clear to me than when I chat with my friends who are teachers and hear the stories of how their students' childhoods are such contrasting experiences to ours. It makes me realize that, number one, kids today don't realize how good they've got it and, number two, that I'm old. I'm officially old, you guys.

1. Being Put On Restriction

In the '90s, this meant having to come straight home from school, do your homework, and very likely let your little brother or sister shadow your every move without complaint while your friends all relished their freedom by cruising the mall. Oh, and your landline phone time was suspended.

If you told kids today you were taking away their landline, you'd probably get a look of sheer confusion. But if you tell them you're taking away their smartphone, which is basically the gist of restriction now, you will be met with anger, frustration, sullenness, indignation or any combination of the four.

2. Being Sent To Your Room

When a '90s kid got in trouble and was sent to his or her room, there was only one thing to do: slap on a humongous pair of headphones and drown out the sounds of your horrible life with whatever music was streaming from your Discman.

If a kid today was going to drown out the humdrum of their daily existence, they'd do it by way of earbuds and an iPod. But, here's the thing — getting sent to your room today isn't really a punishment. Have you seen all the cool stuff kids today have in their bedrooms? My four-year-old has cooler gadgets than I had back in the, well, ever. (Although, to be fair, '90s bedrooms could be pretty epic, too.)

3. Having Your Viewing Privileges Revoked

We didn't have the myriad technological devices in the '90s that kids today have, which meant we relied on Blockbuster to fulfill all of our bingewatching needs. Heaven forbid you did something bad enough that your parents forbade you from visiting the brick-and-mortar video emporium to pick up the latest season of Dawson's Creek to catch up on.

Two words: No Netflix. Gasp! For that matter, no Hulu or Amazon Prime either. For shame!

Oh, how the times have changed. Whilst '90s kids were getting railed for peering at scantily clad male clothing models and reading stories of teenagers pawing each other, today's kids are debated with their moms and dads over the appropriateness of watching Miley Cyrus' 2013 VMAs performance.

5. Getting Your Digital Obsession Dashed

If you were spending too much time obsessing over a digital device in the '90s, odds are good it was your Tamagotchi (or the cluster of them hanging from your key fob). Yet, now matter how much you tried to reason with your mom that your cute little digital pet would literally crap itself to death without your constant attention, she'd still take it away for fear you were rotting your brain by fiddling with it non-stop.

Since having your smartphone taken away is typically reserved for major restriction, today's kids are stripped of apps like Instagram used to alert the world to important happenings like eating a rainbow bagel.

Remember the thrill of waiting until your parents were sleeping soundly, sneaking into the dining room to your obnoxiously large desktop computer, and logging into whatever chatroom you wanted where you would proceed to trade idiotic small talk (Me: Hey. Them: Hey. Me: LOL) with perfect strangers? Yeah, me too. Good times. Well, at least until my mom walked in, realized I was chatting with what could very well have been a 40-year-old creeper sitting around in his underwear with tinfoil on his head, and felt compelled to warn me of the evils lurking on the Interwebs.

Kids today almost bypassed this whole process when they caught onto the seeming brilliance of Snapchat, whereby their naughty pics and messages disappear after 10 seconds. Of course, they wound up in the same boat as '90s kids when they started taking screenshots of said naughty messages — which parents then find and use as teachable moments.

7. The Biggest Blow of All: Taking Away Internet Time

Ugh. Like, uggggghhhh. You considered it a total miscarriage of justice when your Internet privileges got scaled back to one hour a night — you know, considering dial-up connecting and disconnecting every time anyone had to make a call ate up roughly two-thirds of that meager allowance.

Is it even possible to take the Internet away from kids today? It seems entirely possible the world might start spinning in reverse or something it that were to happen (or at least that what the kids seem to believe). No, today's Internet-related punishment means being scaled back to the desktop computer which — despite having lighting fast cable speed —is considered a dinosaur since it isn't as convenient as an iPad, Kindle, smartphone, laptop, or video game console.