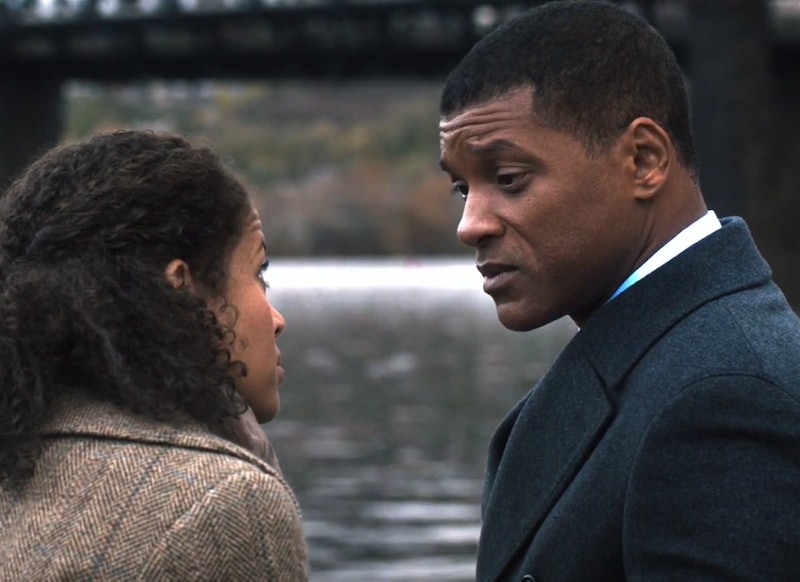 In Concussion, Will Smith is bringing the controversial true story of how one doctor discovered CTE — Chronic Traumatic Encephalopathy — a brain disease caused by the repetitive head trauma suffered in sports players, specifically the NFL. In the film, Smith plays Dr. Bennet Omalu, a pathologist who challenged the National Football League about the health of their players in the mid 2000s by exposing the dangerous consequences for repetitive brain trauma. Concussion has already inspired heated debates about the safety of football and the sport's identity as an American tradition, and there's little doubt that the explosive true story will inspire many more. With so much information on the subject, it's no surprise that fans are wondering what, exactly, inspired the film. Is, perhaps, Concussion a true story, down to the smallest details?

Concussion is officially credited as being adapted from "Game Brain," an article written by Jeanne Marie Laskas and first published by GQ in September of 2009. The article detailed Omalu's discovery of CTE, which started in 2002 when he performed an autopsy on Mike Webster, a Pittsburgh Steelers' super star who died at the age of 50 after suffering a sharp decline in mental health:

"Omalu stared at Mike Webster's brain. He kept thinking, How did this big athletic man end up so crazy in the head? He was thinking about football and brain trauma. The leap in logic was hardly extreme. He was thinking, Dementia pugilistica? 'Punch-drunk syndrome,' they called it in boxers. The clinical picture was somewhat like Mike Webster's: severe dementia — delusion, paranoia, explosive behavior, loss of memory — caused by repeated blows to the head."

The explosive article, which went on to detail Omalu's struggle to get his findings published, and later acknowledged by the NFL, was extremely popular. Popular enough to inspire writer-director Peter Landesman to make a major Hollywood picture about Omalu's research. It also appears to have kicked off a trend of books on the NFL and the organization's original denial of CTE and a 2013 special on PBS' Frontline.

Interestingly enough, one month before Concussion hits theaters on Christmas, Laskas released her own take on the story, focusing on Omalu's journey, titled Concussion. Laskas' book was released on Nov. 24, and the front cover declares that Concussion is "Now A Major Motion Picture," so, even though it isn't credited as inspiring the film, it's probably still correct to say that Concussion is based on a book.

Concussion appears to be based on both an article and a book, but, if that's too confusing, the most important thing to remember is that Concussion is based on the true story of Dr. Omalu's battle with the NFL.

More like this
9 Films About Mental Health To Watch On Netflix UK
By L'Oréal Blackett and Sophie McEvoy
Taylor Swift, Kerry Washington & More Speak Out On Uvalde Mass Shooting
By Jake Viswanath
Rebekah Vardy & Coleen Rooney’s Trial Has Officially Begun
By Bustle UK
Twitter Was Saying The Same Thing About Sam Ryder’s Surprising Eurovision Result
By El Hunt
Get Even More From Bustle — Sign Up For The Newsletter