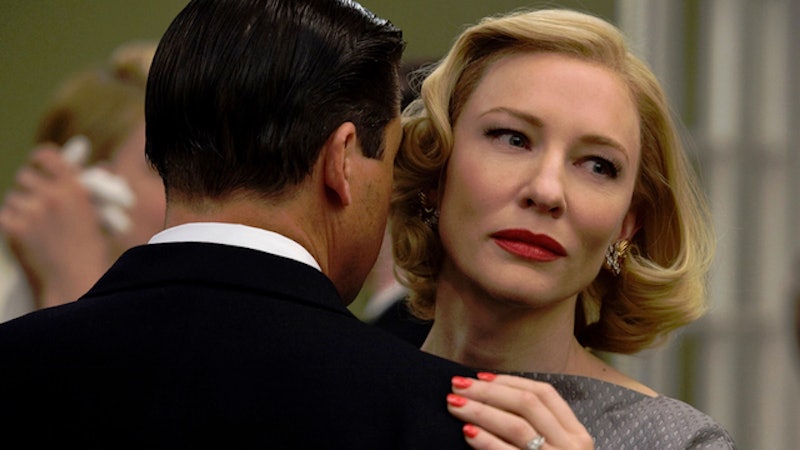 It's the most wonderful time of the year. No, not the holiday season, awards show season! The nominees for the 2016 Golden Globes have been announced, meaning we officially have begun our long marathon journey across hundreds of feet of red carpets towards the biggest awards show of the year: the Academy Awards. The Golden Globes are the more fun sister to the Oscars, where you can have a drink (oh yes, there's alcohol there) and schmooze with some of your favorite television and film stars. But more importantly, the Golden Globes gives us all an idea of who will be in the running for an Oscar. Or at least some fodder for our 2016 Oscars predictions.

The Golden Globes can be helpful in predicting some categories, specifically Best Actress, which has an 85 percent success rate of predicting who will win a little gold man. However, this year could be especially tricky when it comes to predicting the Oscars, being that the nominees for already announced awards shows have been all over the place. While the Golden Globes gave Carol five nominations, the Screen Actors Guild gave Trumbo the most with three. And, while there's some definite crossover between the two lists, there's definitely some big differences. Variety has already declared that this Oscar season will be a "hot mess," since there are no frontrunners just yet. So what does that mean for movie and awards show fans alike? It's going to be one hell of an interesting year.

So, based on what we know now, here's who I think are locks to earn an Oscar nomination, along with a few long shots, who we're calling strong contenders.

Based off the HFPA's list, this could be a good year for female-driven stories from Room to Carol to Joy. The Academy tends to love films that are about the industry, so all the current noms for Trumbo could pay off in a big way. Mad Max's multiple Golden Globe nominations and the fact its been on nearly ever critics' year-end list have also increased its chances of earning an Oscar nom, while Brooklyn — despite being snubbed for Best Picture at the Globes — should still easily pick up the nomination for Oscar with its nearly perfect reviews.

But, don't count out Inside Out just yet, since the Academy is more apt to put an animated feature into the running for Best Picture than the Golden Globes, specifically if it is a Pixar one. In recent years Up and Toy Story 3 have been nominated for Oscar night's biggest prize. Bridge of Spies wasn't a blockbuster, but it had critical buzz and that one-two punch of Tom Hanks and Steven Spielberg could save it come Oscar time. Quentin Tarantino's gory western, The Hateful Eight, could also end up on the list being that the Academy loves his work — he's earned two Best Screenplay Oscars.

Strong Contenders: Inside Out, Creed, Bridge of Spies, The Hateful Eight

Since we already mentioned that the Golden Globes do a good job of predicting the final outcome for this Oscar, the nominees may fall in line. While the HFPA chose to consider Alicia Vikander and Rooney Mara as the stars and not supporting players, we may see those two earn supporting nods at the Oscars. If they aren't, Rooney Mara may lose out to her Carol co-star Cate Blanchett in this category. Jennifer Lawrence may have been snubbed by the Screen Actors Guild, but her Globe nod will probably lead to an Oscar one, especially since the Academy is such a fan.

But with all these young ingenues, the old guard like Maggie Smith for Lady In A Van could sneak into the race, as could Lily Tomlin for Grandma, an indie that focuses on abortion, a newsy topic that may sway voters.

Leonardio DiCaprio is a lock for this — and most likely to win for his harrowing portrayal of Hugh Glass, which has him pushing himself to the brink of death and back. Bryan Cranston and Eddie Redmayne, also seem to be sure things for this category. But the other slots? Well, that's really anybody's guess. Michael Keaton's loss last year may endear him to voters who thought he should have bested Redmayne and result in a rematch, though Spotlight is certainly more of an ensemble piece. And ,even though Michael Fassbender doesn't look anything like Steve Jobs, his portrayal was well received and much talked about, making him likely to take that coveted last spot being that the Academy has a thing for real life portrayals. (Just look at last year's Best Actor nominees.)

But, the Academy does love a good transformation and Johnny Depp did just that to play Whitey Bulger, as did newcomer Michael B. Jordan, who took some very real punches to play the onscreen boxer in this Rocky story. Steve Carell earned his last Oscar nom — his first — for changing his look, but his bittersweet portrayal of a money manager who is not a hero or a villain could pull at the heartstrings of voters.

As previously noted, the biggest shakeups in this category would be whether or not Rooney Mara from Carol and Alicia Vikander in The Danish Girl fall under the supporting category. It's likely Vikander will move to Best Actress, while Mara is relegated to supporting so she doesn't cancel our her co-star Cate Blanchett. But Vikander could slide into one of the slots for her role in Ex-Machina, just as she did with the Golden Globes. It's a stretch, but not impossible. Kate Winslet is the heart of Jobs and an Academy winner and favorite, and the same can be said of Helen Mirren, both of whom are locks to get a nomination.

For the final two slots, I put my money on Rachel McAdams for her quiet portrayal of a Boston Globe journalist Sacha Pfeiffer and Jane Fonda, who is the aging beauty in Youth. But don't be surprised if Jennifer Jason Leigh ends up on the list for her fierce turn in Quentin Tarantino's The Hateful Eight, especially since she's the only woman in that ensemble cast.

For this category, it seems like the Screen Actors Guild nominees may reveal more about the Oscars than the Golden Globes, which is no surprise being that it's an award show that is voted on by actors. Though, there was certainly a lot of crossover between the two: Michael Shannon, Idris Elba and Mark Rylance were nominated for both awards. And Christian Bale was too, just not in the supporting category, having been upgraded to Best Actor in a Musical or Comedy by the HFPA.

For the Oscars, I think they'll lean more towards the very, very young Jacob Tremblay for his co-starring role in Room to fill out that last spot. They love to celebrate new talent in this category and you don't get more new than him. That being said, don't count out Sylvester Stallone, who earned a Golden Globe nomination for his portrayal of an aging Rocky Balboa in Creed or Paul Dano who was included on the Golden Globe ballot for his portrayal of a young Brian Wilson.

With 10 films and only five slots in this category, anything can happen. There are some that seem to be on the shortlist ,like Todd Haynes (Carol), Tom McCarthy (Spotlight) and Alejandro G. Iñárritu (The Revenant) — all of whom were nominated at the Golden Globes — making them your best bets. Ridley Scott, also on the Globes list, will most likely find himself there too. As for that final spot, I lean towards Lenny Abrahamson with Room, a newcomer whose movie has been well-reviewed and could help the small picture get even more eyes on it.

But, George Miller's visually stunning blockbuster Mad Max: Fury Road is certainly a worthy case to knock any of these guys out of the final running, especially since he earned the Golden Globe nom. Don't forget about Steven Spielberg (Bridge of Spies) or David O. Russell (Joy), Academy favorites that they likely won't forget, even if the HFPA did.

These are early predictions in a season that is long, so don't be surprised if you see all of these names on the ballot or only a few. My word of advice when it comes to your predictions? Don't dare count anybody out.

More like this
Remember When Benedict Cumberbatch Announced His Engagement In A Newspaper Ad?
By Hugh McIntyre
Tom Cruise Gives His Honest Review Of Lady Gaga’s New Song For 'Top Gun: Maverick'
By Hugh McIntyre
What’s New On Netflix: A Victoria Justice Rom-Com & The Return Of David Letterman
By Arya Roshanian
'Doctor Who’s New Star Is Already Huge On TikTok
By Maxine Harrison
Get Even More From Bustle — Sign Up For The Newsletter