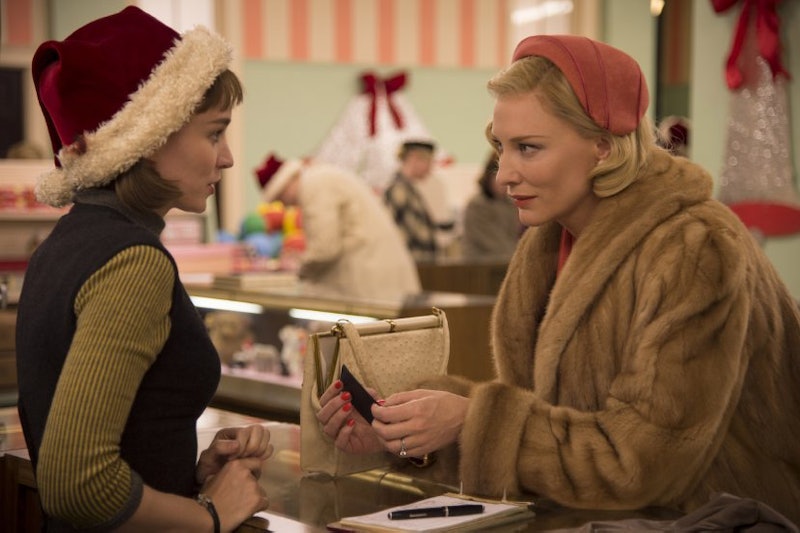 Who's the fairest of them all? Carol, it seems, if Thursday morning's Golden Globe nominations are any indicator. The Cate Blanchett-Rooney Mara period piece led the pack of nominees with five nominations: Best Drama (Film), Best Actress for both Blanchett and Mara, Best Original Score, and Best Director for Todd Haynes. In comparison, The Big Short, The Revenant, and Steve Jobs each earned four nominations, though of those, only The Revenant will come up against Carol for best picture. They'll also face off against Mad Max: Fury Road, Room, and Spotlight, a surprisingly great crop of nominees in a year that seemed particularly marked by awards- and Oscar-bait period flicks and biopics. So, what does it mean that Carol earned the most Golden Globe nominations?

It's not just that this year has been a particularly bleak one for films as far as themes go; it's also that they've consistently underperformed according to expectations. The predicted-biggest movies of the year (Crimson Peak, Steve Jobs, Everest, for example), the ones that were most promoted and received the greatest studio support, just didn't yield the box office or critical results they were expected. There were no clear frontrunners moving into the Golden Globe nominations, which may have cleared the way for films who might have been underdogs in years past, films like Mad Max: Fury Road, Room, and Spotlight.

Which brings us to Carol: Though it would have been a strong contender in any other year, would it have been the nominations leader? The Haynes-directed, Mara and Blanchett-fronted film based on Patricia Highsmith's novel (of fraught history — she wrote it under a pseudonym and entitled it The Price of Salt when it debuted) has all the trappings of a big movie. Big names, acclaimed director, and a warm '50s backdrop to boot. It deserves each of the categories for which it's been nominated, and it was probably the most predictable pick to end up on the list this year. Indeed, most predictions, from Bustle's own to Indie Wire to Vanity Fair , picked up on Carol as a likely recipient. So, on its own terms, it shouldn't come as too much of a surprise that Carol was nominated in each of the categories it put in a showing for.

The Golden Globes have always been the dark horse of the awards season. More daring than the Oscars, more artsy than the Emmys, they tread the line between television and film, honoring both without pandering to easy predictions and awards-bait (note: Spielberg's Bridge of Spies is nearly absent from the list). Yet its embrace of Carol might indicate a Hollywood that is better prepared than ever to accept that female-fronted films can and will outperform their male counterparts (though each of the Best Picture nominees are also directed by men). Indeed, of the five Best Picture nominees, three are fronted by women (Charlize Theron of Mad Max: Fury Road, Brie Larson of Room, and Blanchett and Mara of Carol), while yet another (Rachel McAdams of Spotlight) features a woman in a central, albeit not starring, role.

And, across film, this has been a great year for women in movies. Diary of a Teenage Girl, Brooklyn, Miss You Already, and the final installment of the Hunger Games saga all proved that women can front indies and blockbusters alike with great success. The fact that a film led by not one but two women leads the Golden Globes nominations should not come as a great surprise — and honestly, we should have reached this point years ago — yet still, it surprises. (In a good way!)

Carol's frontrunner status also gestures to a Hollywood that may have finally seen its fill of biopics, while still remaining entranced by period pieces. It's loosely based on an encounter Highsmith herself had while working at a department store one holiday season, but she never met the mysterious woman again — unlike Mara and Blanchett, whose romance drives the film forward. It's not so revolutionary that Carol has been nominated for all these awards given the academy's history of honoring films that make nods to the past over the future, but that it was Carol over Bridge of Spies might say a whole lot more, and it's a great step forward for film diversity.

More like this
Sandra Bullock, Girlboss Extraordinaire
By Matt Harkins & Viviana Olen
There Are Only Four 'Temptation Island' Couples Still Together
By Brad Witter
'Stranger Things' Star Joe Keery Is Dating An "Indie Scream Queen"
By S. Atkinson and Grace Wehniainen
Everything To Know About Marvel’s 'Thor: Love And Thunder'
By Grace Wehniainen
Get Even More From Bustle — Sign Up For The Newsletter