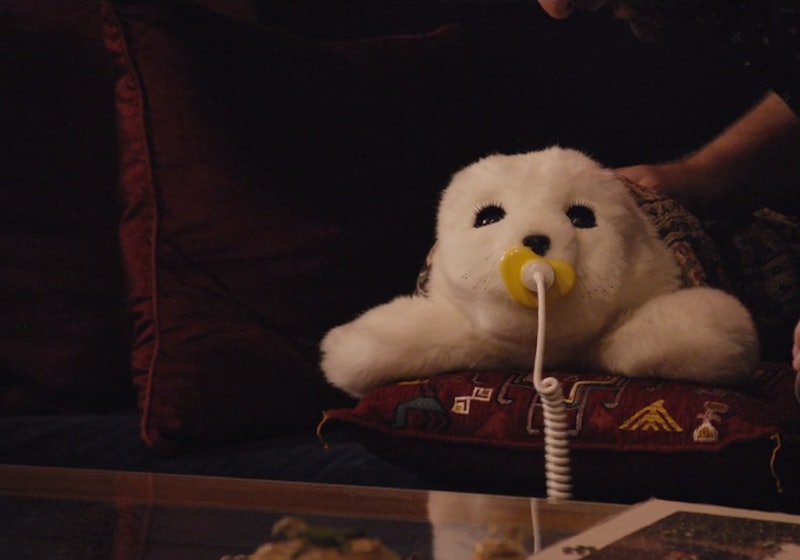 What does it mean to be loved? Many television shows address love in different ways, posing questions like "what is love?" "how does love bring people together?" and more often "how does love tear people apart?" But no television series addressed what it means to be loved quite like Golden Globe nominee Aziz Ansari's Master of None . Specifically, Episode 8, "Old People," which followed the story of PARO the seal, who at first appeared to just be a robotic seal and ended up being so much more. PARO, playing himself, gives an emotionally wrought performance, exuding an emotion that most actors are unable to convey honestly — Love.

Portraying love is tough. Love isn't always loud and excessive in the same ways that anger and sadness can be, and so TV shows and films usually just tell the audience that two characters are in love, instead of showing them. Master of None, one of the most subversive new series of the year, has found a way to convey true love by casting one of the most lovable actors ever set to film — PARO the seal. However, after having delivered such a powerful performance, everyone is wondering — where is the Golden Globe nomination for the seal of the year?

The Golden Globes, in addition to most major award ceremonies, have a long tradition of snubbing performances by inanimate objects in media. Since Wilson the Volleyball's infamous snub for Supporting Actor in a Dramatic Film for its role in Castaway, awards ceremonies have continued to ignore excellent performances from objects including Bianca — the titular "real girl" from Lars and The Real Girl — and Ansari's former Parks and Recreation co-star DJ Roomba.

However, it shouldn't be too shocking that the performance of the year was snubbed. In a world where actors like Amy Poehler and Jon Hamm get snubbed, it's no surprise that the Hollywood Foreign Press Association would fall back on its habit of not nominating inanimate objects for an acting role. Frankly, it's almost as if they haven't even seen "Old People." PARO the seal is, objectively, the cutest thing that has ever been on television and it's inconceivable that something that cute could exist and not be given every award in existence. Sorry Quentin Tarantino, but PARO the Seal is director of the year for directing our arms to Hugville.

If you're as upset about PARO's snub as I am, fear not — acting is only a secondary career for PARO, whose main passion is assisting those in old age, as well as those who suffer from severe developmental disabilities, from feeling lonely. If you're ever feeling upset or hurt by PARO's Golden Globe snub, you can just watch videos of people being cheered up by interacting with PARO and just cry into every single thing that you own because of how adorable he is and how beautiful it is to see people smiling who don't usually smile, and the immense love that PARO has for all he comes in contact with. That should help pass the time until the Emmys right this wrong and give PARO the awards recognition he deserves.

More like this
Sandra Bullock, Girlboss Extraordinaire
By Matt Harkins & Viviana Olen
'Doctor Who’s New Star Is Already Huge On TikTok
By Maxine Harrison
What’s New On Netflix: A Victoria Justice Rom-Com & The Return Of David Letterman
By Arya Roshanian
How Ncuti Gatwa's 'Doctor Who' Casting Impacts His 'Sex Education' Future
By Nola Ojomu
Get Even More From Bustle — Sign Up For The Newsletter