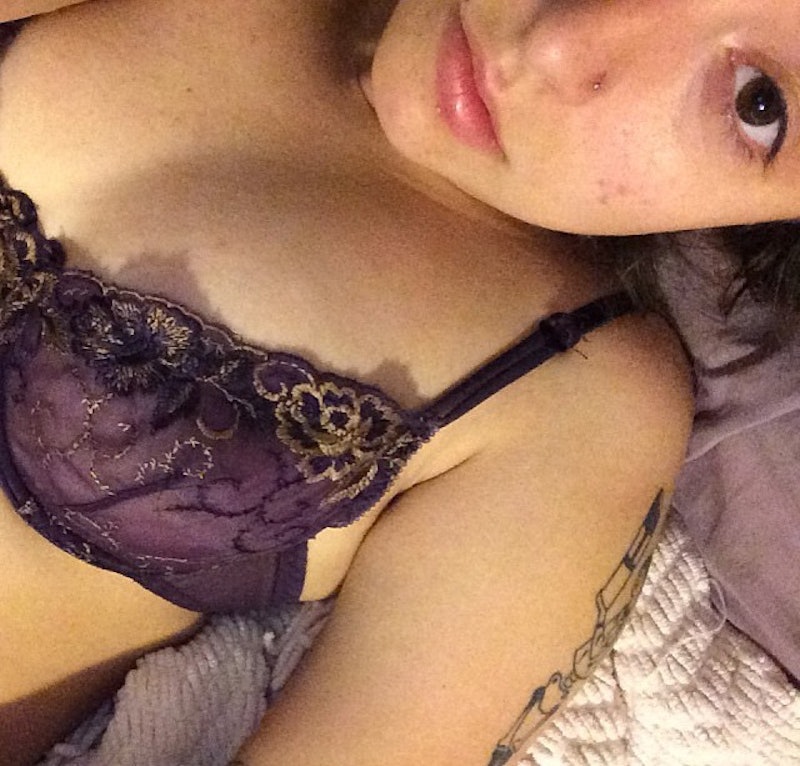 I've always had a complicated relationship with my breasts, as do most people assigned female at birth. Cultural norms constantly create new and terrifying ways for feminine people to feel self-conscious about their bodies. This feels particularly true in the case of specific parts of the body that tend to be highly sexualized as well as gendered, like boobs. We are often told we'd be prettier if we showed off our cleavage more in revealing tops. But then as soon as we do this, we are regularly penalized for being "slutty," and blamed if we fall victim to unwanted sexual attention.

With so-called rules that dictate the more "desirable" shapes, areola colors, and perk levels of breasts, many people take refuge by covering them up or investing in the the latest push-up. But then there are those assigned female at birth who don't always identify fully with their femininity, if at all. As a non-binary person, I know that my breasts often feel like a daily reminder of the body I am limited in: A body that doesn't necessarily fall into step with the gender I was assigned. Ultimately, they have been my biggest body positive challenge. But looking at a timeline of my relationship with my breasts as a genderqueer person reveals just how far I've come.

When I was nine, the area around my nipples became very tender. I was informed by a doctor that my breasts were growing in. And from that first moment, I felt an overwhelming sense of dread.

The next day during lunchtime, a particularly aggressive friend elbowed me in my chest unintentionally. I covered myself protectively as pain seared through my body. When she asked what was wrong, I told her that my boobs were growing in. She mocked me, telling me I was too young for that. And from that day on, she intentionally elbowed me in the same place every day.

My parents got wind of this and after a harsh discussion with the girl's parents, we were forced to go to mediation with the school counselor. She apologized in front of the adults, but continued to laugh with her friends, and even her mom, about "what a baby" I was being and how odd it was that I was such an "early bloomer." That was the first time I learned to be ashamed of my body.

When my mother took me bra shopping for the first time, I wanted to cry. I felt like my breasts were growing too fast, and I hated that my body was getting curvy and more feminine. I just wanted to be a tomboy — or perhaps even a boy.

I read stories in Seventeen Magazine about breast reduction surgery, and I asked my mother if I could get something like that. She told me no: That they weren't big enough for those kinds of measures, and that we would revisit the topic when they were done growing. I took comfort in the fact that I wasn't entirely dismissed, and felt solidarity with my mother when she admitted that she also felt her breasts were too big.

Later, when I was sexually harassed for the first time, I cried in shock. I hated my body even more for bringing me that kind of attention. I was still growing, approaching a C-cup, and my clothes stopped fitting me properly. My cleavage became the focal point of every outfit and I felt helpless.

I recall a time a boy in my art class told me about all the sexual things he'd like to do to me, with specific attention placed on my larger breasts. I didn't cry this time. I looked at him stoically until he finished his spiel, called him a jerk, and walked straight to the principal without a hall pass. She didn't sympathize with me, wrote me up for a dress code violation, and told me I had to wear one of her cardigans over the top of my outfit. Angry and disillusioned, I refused.

And so I got into the habit of hiding my boobs from any prying eyes around me, fearing that I would be attacked, sexualized, or perceived as a woman. I covered them during sex until certain partners would force me to remove the bra or hands that were safely concealing my chest from view.

It took me a long time to realize that my hatred for my breasts, exacerbated by sexual harassment, came down to my gender identity (something that was still a big question mark for me before college). For too long, they were a feminine marker assigning my body a gender I didn't feel close to.

It took some time, but I now have the confidence to love and celebrate my breasts. At 21, I'm out to the world about my genderqueer identity. Having so many of my friends and my partner acknowledge and respect my masculinity has helped me build the confidence needed to love my boobs, which I'm learning are not necessarily gendered. Knowing so many other genderqueer, sex-positive humans or reading their blogs on the Web has taught me that bodies are just bodies, and not at all indicative of gender or identity unless you want them to be.

I also learned that it's totally OK not to identify with certain parts of my body on some days, or opt for a more masculine silhouette via a compression bra. This balance between body positivity and respecting my gender feelings is also personified through a supportive partner, who manages to worship my breasts while simultaneously offering to pitch in for my first chest binder.

Overcoming the barrier of feeling comfy about my bare breasts was the last phase in my journey towards learning to love them. In intimate settings with my partner, my breasts felt beautiful. When on my own, however, I still tended to hide from that seemingly gendered part of myself. Funnily enough, it was nudity that helped spark a change.

Until recently, I had never taken any naked photos of myself because of this insecurity. Considering how often I discuss and write about sex and sexuality, I began to feel a disconnect: Like I wasn't being as body or sex positive IRL as on the Internet.

Encouraged by my body pos goals, I took my first nudes ever this year, and sent them to a friend who was organizing an art party centering around nude images. Yes, it felt scary at first. But ultimately it was incredibly rewarding. My nude was simple, and contained nothing but my breasts and pet rat perched on my shoulder. I admired the prints mounted on the wall in a room full of strangers and friends. My best friend even told me that my breasts were beautiful. And I didn't feel self conscious. I knew I looked good. Even if I wasn't a woman. Even if I didn't want to be sexualized all the time.

Other participants went further and displayed photos of themselves in sexy positions, sporting nipple clamps or rocking leather collars. While my display was simple, these other people served as a great reminder of the fact that you can completely own and flaunt your sexual body (including your breasts and vagina) without being a girl. Today, I love my breasts: Not because they're feminine or because I've been able to acknowledge their masculinity. It's because they're beautiful. They transcend the gender binary. They give me pleasure. And they're mine to interpret as I please.

More like this
What’s The Kibbe Body Type Test That’s All Over TikTok?
By Marilyn La Jeunesse
The Most Gorgeous Plus-Size Looks From The Met Gala
By Dominique Norman
How This Founder Manifested Ariana Grande As A Brand Ambassador
By Dominique Norman
Target Dropped *Two* New Fashion Collabs With Queer-Owned Brands
By Dominique Norman
Get Even More From Bustle — Sign Up For The Newsletter