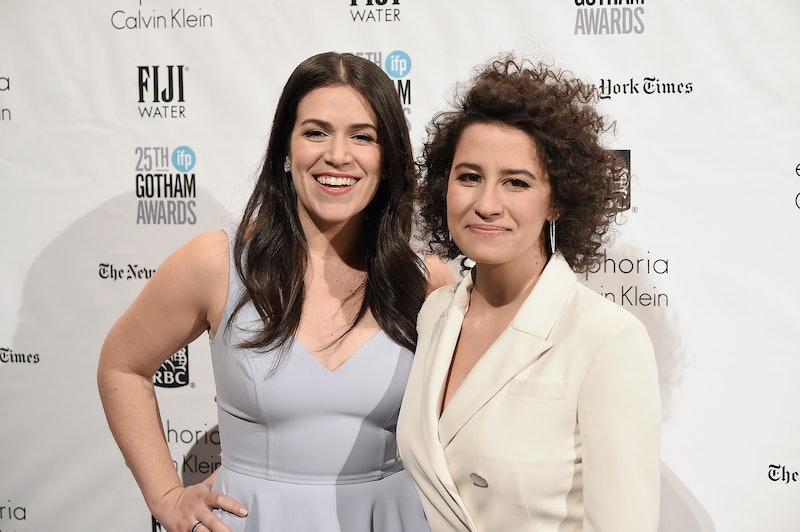 As the saying goes, "You win some, you lose some." On Thursday morning when the 2016 Golden Globes nominees were announced, there were plenty of pleasant surprises, but also a few inexplicable snubs. From Unbreakable Kimmy Schmidt to Inside Amy Schumer, some awesome shows didn't receive the nominations they deserved. Another major disappointment: Broad City isn't up for any Golden Globe awards. Such an outrage, right? Abbi Jacobson and Ilana Glazer are comedic geniuses, who perfectly capture what it's like to be a 20-something in NYC. It's far more realistic than Sex & The City ever was. (Sorry not sorry, Carrie Bradshaw!) But before fans of the Comedy Central show get as outraged as Abbi when Bevers doesn't leave her apartment, it's actually OK. Taking the situation in stride, the Broad City stars had the perfect response to their snub. The show's official Instagram shared a picture of Jacobson and Glazer's butts with the best possible caption:

We actually already have 4 Golden Globes.

Get it?!?! (Obviously they're referring to their rear ends, duh.) In the words of Ilana herself, "YASSS, QUEENS." Despite the undeniable disappointment, these two held their heads high and responded in the most hilariously awesome way. Who needs Golden Globes when you have such an amazing sense of humor?

All joking aside, it really is a bummer that this show didn't get the recognition it deserves. The only plausible explanation for why they weren't nominated is that maybe the Hollywood Foreign Press Association couldn't decide which one to put in the Best Actress in a Television Comedy Series category. It'd be impossible to choose between Abbi and Ilana, but it also would be pretty unfair to dominate the whole category like that.

Despite the ridiculous lack of nominations, I have a feeling the Broad City ladies will be just fine anyway. Actually, I'm sure of this! Their flawless response proves it.

More like this
Lydia Leonard Is Setting The Record Straight
By Olivia-Anne Cleary
Sandra Bullock, Girlboss Extraordinaire
By Matt Harkins & Viviana Olen
Spice Girls’ Net Worth: The Richest Member Is Wealthier Than The Rest Combined
By Hugh McIntyre
Selena Gomez’s ‘SNL’ Hosting Debut Had Twitter Gushing Over ‘Barney’ & Wigs
By Stephanie Topacio Long
Get Even More From Bustle — Sign Up For The Newsletter