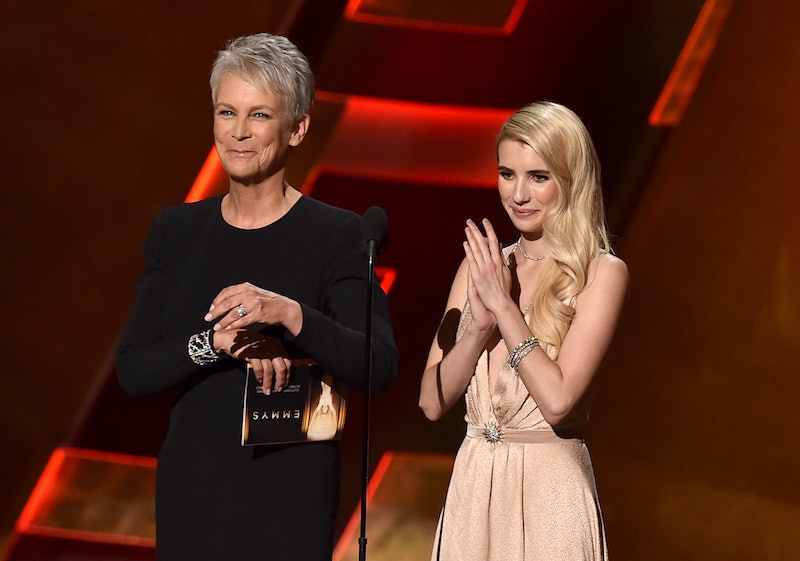 What a week for Scream Queens! The season finale aired on Tuesday and the second Red Devil was finally revealed. In case that wasn't enough of a shock, fans of the Fox series have something else to celebrate. On Thursday morning, 2016 Golden Globes nominees were announced and Jamie Lee Curtis scored a nomination for Best Actress in a Television Comedy Series. While she's got quite a bit of competition in that category — including last year's winner Gina Rodriguez of Jane the Virgin — Curtis definitely deserves the nomination. Although I must admit, I was a bit surprised to see her pop up in this category.

Don't get me wrong, Scream Queens is fantastic! Ryan Murphy created another hit by essentially combining the gore of American Horror Story with the comedic relief of Glee. I just wasn't expecting Curtis to be nominated. Part of me has to ask — what about Emma Roberts? Scream Queens and Kappa Kappa Tau are nothing without Chanel Oberlin. Roberts could've totally earned a Best Supporting Actress nod.

Then again, it does make sense that Curtis is the one nominated — considering she's essentially the show's backbone. As Dean Munsch, she's been there since the beginning, even in the flashbacks. She's also the only one who (spoiler alert) knows that Hester is guilty. Curtis' character is intense, smart, but also funny. Who didn't love her book about New New Feminism?

Overall it's refreshing and awesome that the show received a nomination, especially since it's so new. Acknowledging this honor, JLC posted a picture of the Scream Queens cast on her Instagram account. She wrote,

Proud to #represent this #squad at the @goldenglobes . Our #squadgoals was to bring you the most entertaining hour of TV we could! #screamqueens @screamqueensfox

OK, so she may have overdone it on the hashtags (or at least that's what Chanel would say). But it's totally allowed, since I'm sure she's just thrilled about the nomination. She's right too — it is one of the most entertaining hours of TV. Maybe this is the push the show needs to get renewed for a second season? Fingers crossed!

Regardless, Curtis is no stranger to the Golden Globes; this marks her seventh nomination. She's taken home two awards for Anything But Love in 1999 and True Lies in 1995. Curtis was first nominated in 1989 for her role in A Fish Called Wanda.

Here's hoping she scores a trophy again — this time for her glorious role on Scream Queens! If not, Chanel perfectly sums up how I'll react.