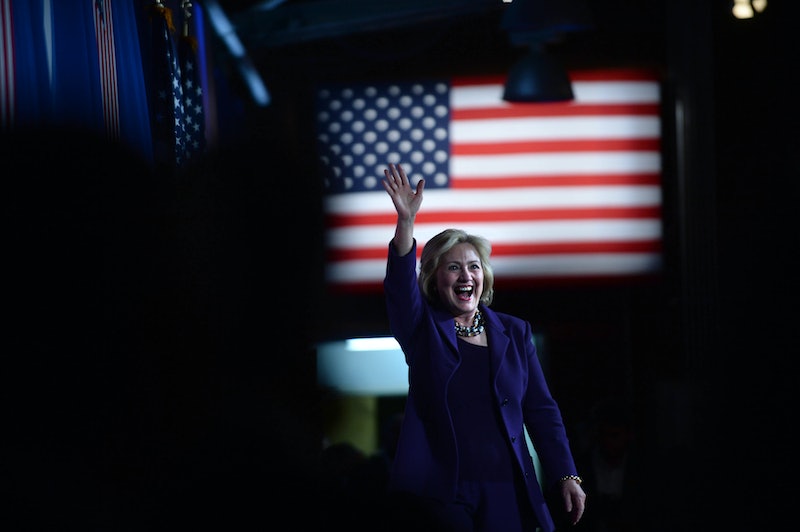 It's not news that Hillary Clinton has some very famous fans. Katy Perry publicly showed her support for Clinton's campaign, and Christina Aguilera recently declared herself a Clinton supporter. Perry went as far as to perform at Clinton's Iowa rally, and gifted Clinton with a very special necklace which spelled out the all-important acronym POTUS for her birthday. Now, we even get to ask the glorious question: Is Hillary Clinton on a Season 3 episode of Broad City ?

It should come as no surprise to anyone that Clinton has even more famous fans (or are they friends at this point?) who are every bit as awesome and feminist as Perry and Aguilera, but in a very surprising tweet on Friday, Clinton shared a photo of her "On the set of @broadcity season 3 with @abbijacobson, @ilazer and Amy! #yas." The Amy in question in Clinton's tweet is none other than Amy Poehler (who is an executive producer on Broad City and has long championed the show) — #yas indeed! But what does this all mean? Will Amy Poehler be making an appearance on the show? And if so, what can we expect from what would be a legendary episode? Does this mean that Glazer and Jacobson will be on Clinton's campaign trail? I have so many questions...

Broad City's official Twitter account also posted a photo of Hillary Clinton, along with the quote, "Just three best friends on the set of @BroadCity season 3! #Hillary2016." The photo showed Glazer and Jacobson hugging Clinton on a camera monitor, presumably on the Broad City set. Based on the image, it certainly looks as though Clinton will be appearing in the upcoming season of Broad City, and TV Line appeared to confirm that Clinton will appear.

The Broad City Twitter account also shared a group selfie with the caption, "Crying red white & blue tears. Hanging w/kween @HillaryClinton on the set of season 3! #Hillary2016 #AmyPoehlerSelfie". It's understandably a super exciting moment for everyone concerned, which is why the photos of Clinton and co. keep on coming.

Broad City Season 3 is due back on Comedy Central on Feb. 17, 2016, and I just got even more excited for its return.