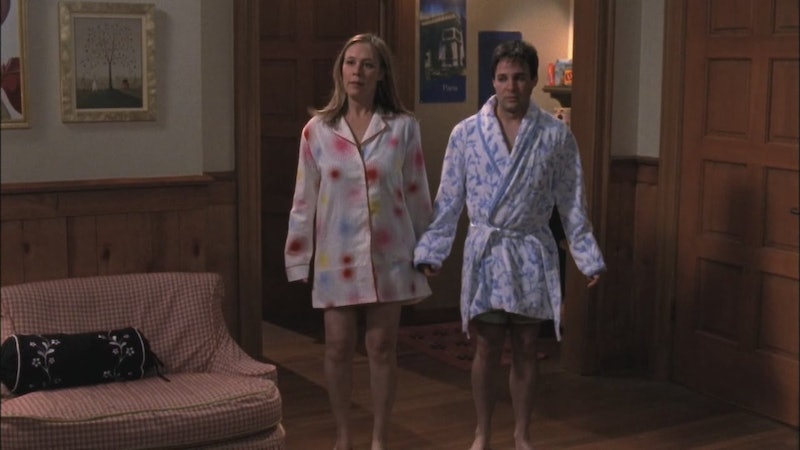 I'm going to try not to embarrass myself by screeching with joy my entire way through this, but I'm still pretty damn excited about the news that Netflix is (allegedly) doing a Gilmore Girls reboot. With stars like Lauren Graham, Alexis Bledel and Sean Gunn cryptically, maybe sharing their excitement over the possibility, it seems about time that some of the actors who played smaller, but still pivotal, roles in the show came out and shared in our happiness too. Luckily, Danny Strong, who played Gilmore Girls' affably awkward Doyle, has revealed in an interview with E! that he's also pretty stoked for another trip to Stars Hollow.

"I think Gilmore Girls is a perfect show to do a reunion like this. I think it'll work really well because it was a show about characters and a world and their relationships. So you can just pick up those relationships, I think we would be very interested to see where they're at now."

On Gilmore Girls, Doyle enjoyed (is "enjoy" the right word?) a rocky relationship with the equally as driven Paris Geller. They had their ups and downs, they had ridiculous fights, and they shared unique levels of social gracelessness which proved their screwball love affair to truly be one for the ages. So Strong is absolutely right, I do want to know where those relationships are at now, and crucially, just where would Paris and Doyle's relationship would be at right now?

1. They'll Be Attending A Lot Of Dinner Parties, But Still With Pre-Rehearsed Jokes

"Last year I was sleeping with the editor, and now he is...!" was such a knockout at Rory's 21st birthday party that I'm sure they remembered to prepare a joke for every social gathering they attend together.

2. Paris Will Still Be Taking Care Of Doyle, But Probably Much Better Than She Used To

I mean, she's going to be a medical professional by now! She won't need Nanny to mop Doyle's brow or apply vapo-rub when he's sick, anymore.

3. Doyle Will Still Be Worshipping Paris For The Strong, Sassy Goddess That She Is

Doyle understood that women who society deem to be "difficult" are more often than not actually pretty awesome. Paris is clearly the Queen on the front cart of that parade, and more power to her!

4. They Could Be Terrific Parents

If their technique for taking care of Logan was any indication then their kids (if they have any) are in for a childhood of neurotic, over-protective, tough love (with some TV time thrown in for funs).

Let's just say that Doyle was more of a thinker than a drinker, and leave it at that shall we?

And by now there'll hopefully be no shame or judgement from roomies who walk into their home at exactly the wrong time.

7. Yoga Will Keep Their Mind, Bodies & Spirits In Check

Which is super important when you're in very opinionated relationship with someone who infuriates and delights you in equal measure.

Because, honestly? That coat looked amazing on him, I'm not even kidding.

9. And Of Course They'll Have A Perfect Relationship

Because that's just how Paris rolls.

So, I guess what I'm saying is please let Paris and Doyle be in the new Gilmore Girls episodes, and please let them still be together. I want this, you want this and clearly Danny Strong also wants this. Listen and deliver, universe.