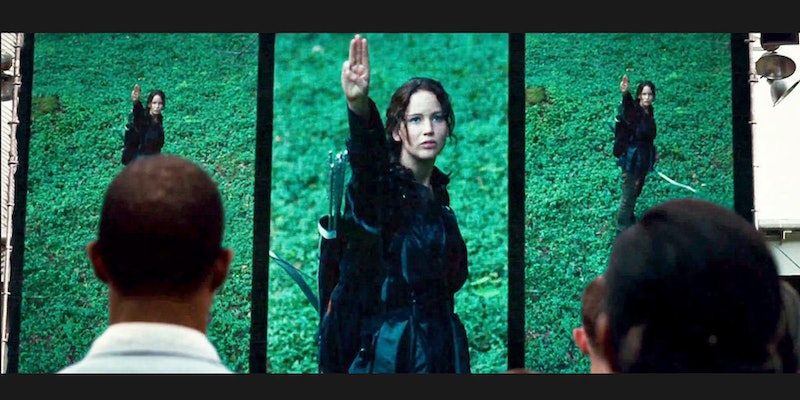 After seeing Mockingjay — Part 2 for the fourth time this weekend, I feel pretty content that one of my all-time favorite series has finally come to a close. I first read the captivating series The Hunger Games while I was a freshman in college, when I secluded myself to my dorm for an entire weekend and ugly sobbed as Katniss and Peeta's story started and ended. It wasn't long before the first movie came out, and I remember going in hoping for the best. And I wasn't disappointed.

The Hunger Games franchise is easily one of the best book-to-movie adaptations. With Hunger Games author Suzanne Collins on board for writing the screenplay, there wasn't much room for error. While it's hard to argue that any movie adaptation is better than the books, I do think the movies brought out some unique perspectives that the books just couldn't touch — like seeing President Snow without Katniss and watching the individual districts rebel against the Capitol.

Compared to other huge series like Harry Potter where the movies can't even begin to scratch the surface of the complex wizarding world (but certainly did an OK job), the directors and members behind The Hunger Games films did an exceptional job at bringing Panem to life. Here, in detailed points, I'll be drawing out how the two stack up, like where the books obviously did better, and where the movies took it a step further — ensuring that this series will be remembered up until an a world-ending apocalypse happens.

Books: I remember feeling utterly compelled by Collins’ descriptions of individual Capitol residents and revealing the harsh and broken down pieces of The Seam. Panem grew out of the books and captivated its readers with a unique post-apocalyptic world no one had ever imagined before. I remember diving deep into each district, researching as much as I could about these fictional states for my own personal desire. The books have more opportunity to pay attention to details like that, which I missed in the movies.

Movies: The majority of the districts are missing in the movies. Movie-goers don’t really know that District 8’s main industry is in textiles and clothing, and that District 6 focuses on transportation. What the movies did excel at, and even top the books on, was getting out of the first-person narrative and exploring this world much deeper. Getting to actually see the Capitol without Katniss in it was something every Hunger Games fan gaped at. This continued throughout the franchise: watching Seneca Crane in the control room, seeing Snow react to Katniss and the other tributes in the Quarter Quell, watching the districts uprise individually, and even seeing Snow get more and more sick throughout Mockingjay — Part 2. This helped Panem grow within the movies and broaden the rioting society, which I loved.

Books: Without a doubt the books are filled with a bunch of characters the movie skipped out on — within reason. But I still will never understand why the tying knot scene with Finnick Odair wasn't included in the movies.

Movies: There's no Madge Undersee — the one friend Katniss has in District 12 and is the reason she gets the Mockingjay pin. Peeta's family takes a backseat in the film, and even though they were definitely not a healthy family, it's still unfortunate there isn't much to see of them, especially when we see that Peeta still cares for them in both Catching Fire and Mockingjay — Part 2. Effie's prep team of make-up artists and stylists who originally make it to District 13 in the Mockingjay book (but not Effie) are absent as well. With quite a few characters scratched out for the sake of the movie movement, there was more time dedicated to the already established characters, such as Prim, President Snow, and Effie.

Books: We're in Katniss's head throughout the book series, so we're mainly focused on her development. It was easy to recognize that she wasn't in-tune with her emotions, has no desire to be in the middle of a love triangle, and is focused on being a sister and caretaker. In the midst of all the crazy Capitol costumes and people, Katniss becomes stronger and realizes she has to take on a higher purpose for anything to change. This is similar to the movies, but the movies jump out of her focus often enough that it isn't always about her.

Peeta's character development is also crucial to the story, because in the books we see how incredibly important it is that he remains true to himself, and then ultimately becomes the opposite due to the torture he endures in the Capitol. One of the biggest differences from book to screen in Mockingjay was Peeta's recovery time. The movie sped it up, missing out on Peeta's cake he makes for Finnick and Annie, and the tiny details that show he's getting better.

Movies: The movies allowed some of the less popular characters, such as Gale and President Snow, to be humanized. In the end of Mockingjay — Part 2, when Katniss asks Gale if the bomb that killed Prim was theirs, he breaks down and apologizes. Whereas, in the books, Katniss blames it on him and he doesn't apologize. By getting to see Snow without Katniss nearby, we see that he is indeed a cruel man, but one that understands the system he's created, and how well he takes the failure of an entire country he basically built from scratch.

Books: Hey, remember that one time Katniss and Peeta made out on the beach for hours in Catching Fire? Yeah, me too. Without a doubt, Jennifer Lawrence and Josh Hutcherson made this romance come to life on the screen, but within the pages of the books — there's just no comparison. Katniss has a hard time admitting her feelings for Peeta throughout the series, but readers were allowed into her head, and whenever Peeta did something romantic or cute was hilarious, we saw and felt her reactions.

Movies: I don't know many people who weren't looking forward to seeing a Katniss and Peeta on-screen kiss (sorry Team Gale), so that was definitely a perk. Their relationship sparks on screen, but it isn't as moving as it is in the books. The main difference is in the pacing — the books offer a slower build up to the love triangle relationship, whereas the movies speed it up and skip out on some small, but wonderful details the readers loved.

Books: Reading about children dying in brutal ways, often by the hands of your protagonist, isn't an easy thing. Collins' made it bearable by putting us in the head of someone who knows survival is key, but realizes there are permanent scars that come with every death. The books, in my opinion, are far more violent than the movies. There was also more action in the last book than in the movie, especially when Katniss trains before she heads into the Capitol. And there wasn't a meat-grinder or flesh melting pod in Mockingjay — Part 2. But I will hand it to the most recent movie where the underground mutt scene was filled with much more suspense and fear than the books.

Movies: While the movies didn't skip out on gory death scenes, they did forget to focus on one of the most terrifying parts of this story: Peeta and Johanna's torture treatment. Clearly, Peeta isn't OK, and while the movies do put a focus on it, I was underwhelmed by the lack of Johanna (she was tortured with water and electroshock therapy, people!) and her recovery story. However, getting to see the fight scenes in the Quarter Quell arena was completely show-stopping in Catching Fire, as well as seeing all of the different tributes, especially during training mode, in the first film.

Books: I should first note that I'm not a big crier when it comes to books or movies, and even though The Hunger Games series definitely got to me, there are probably plenty of tear-jerking scenes I'll forget to mention. Rue's tragic death was the first time I cried in the books. Then I cried when Cinna died, and again at the very end of Mockingjay when I realized that Prim's death wasn't just an illusion of Katniss' exhausted mind. Crying with the books was definitely easier because you're able to put the book down, look out the window, and weep into your blanket as these fictional characters disappeared.

Movies: I still cried at the scene with Rue. Definitely cried when Cinna died — though, it wasn't as long because the movies quickly rush you into the arena. And surprisingly, I didn't cry when Prim first died, but when Katniss yells at Buttercup that Prim isn't coming back. So, there was a fair share of crying in both versions. I think the movie had a little added help with emotional music, real facial expressions to mirror your reactions with, and the sniffling audience around you. Either way, both were filled with tear-jerking moments.

Books: These books were not afraid to reveal the contrast of high society versus poverty in a very real way. In the books, we see Katniss and the people in District 12 suffering much more. We go to the Hob and see how tough life is near the mines and how common it is to die from starvation. This is shown distinctively when Peeta and Katniss, and even Gale, make it to the Capitol and comment on how the excessive amount of food would make anyone distracted from the harsh realities happening in the world.

Movies: Without being confined to Katniss and her views of Panem, we get to make our own opinions of the Capitol, other districts, and the people on our own. The reality-television-feel of the movies is made clear and even relatable while Cesar Flickerman interviews the tributes in a way we're used to seeing on TV. There's also a line I'm completely in love with in Mockingjay — Part 2, when President Snow points out how convenient it is that the bombings on the Capitol children was aired live — giving everyone an obstructed view of the true story. This happens within the media all the time, and for a fictional story with this much power to capture something as real as that, I was blown away.

So which one wins? The books seemed to win out after breaking it down. But I could also watch each Hunger Games movie without many complaints. Collins did an excellent job at writing the series, and did an equally fantastic job of constructing the screenplay. This series will forever be a big deal to me, and I'm happy that there are two incredible versions of media that captured the story.