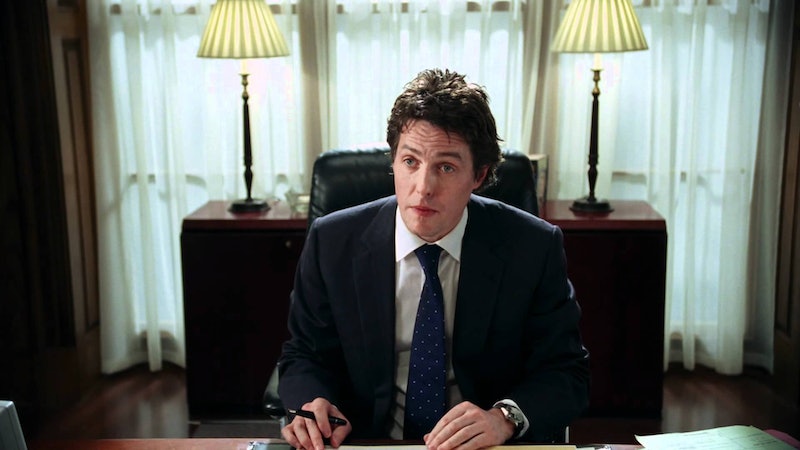 Maybe it is the U.S.'s complicated history with the U.K., but the Christmas film Love Actually is pretty mean to America at times. Yes, Laura Linney gets to represent the United States of America in her depressing role of Sarah, but as an expatriate, she may be the only American character that is even remotely reasonable. No matter your nationality, 'tis the season to watch (and debate) Love Actually. And since Americans who adore the film will spend Christmas re-watching their favorite Brits fall in and out of love regardless, it's typically easier to just move past the fact that the British folks behind Love Actually aren't always kind to Americans.

When I've traveled abroad, I have experienced playful — and not-so-playful — banter with my British brethren about the U.S. breaking off from them in the 1700s. (I actually encountered an Englishman in New Zealand who told me that Americans call the American Revolutionary War the "War of Independence" and I had to politely tell him that I learned about the "Revolutionary War" in elementary school.) But in all seriousness, the U.S. and U.K. have had a fascinating dynamic as allies and super powers throughout America's young history that is actually reflected in the modern Christmas classic.

When I first watched Love Actually, I was initially pretty insulted by the portrayal of Americans in the film. Yet as I've continued to watch it every Christmas season, I've realized that I've been totally overlooking some major Love Actually plot points that are disparaging to Americans overall, and especially American women.

My apologies, but Colin (Kris Marshall) is a disgusting human. He's just a gross dude fixated on getting down and dirty with any woman who will have him. When Colin tells his friend Tony that he's going to head to America because girls there will have sex with him, I was in full agreement with his friend that Colin had lost his mind.

Colin says to Tony, "You know perfectly well that any bar anywhere in America contains 10 girls more beautiful and more likely to have sex with me than the whole of the United Kingdom." This logic came to Colin because he had already assessed that English girls are "stuck up" and he's attracted to girls who are "cooler" and "game for a laugh" — like American girls. He thinks his British accent will make American women want to sleep with him, even saying, "Stateside, I'm Prince William without the weird family."

Instead of Colin being proven completely wrong when he lands in Wisconsin, he ends up having group sex with a bevy of beautiful American women, portrayed by actresses Elisha Cuthbert, January Jones, Ivana Milicevic, and Shannon Elizabeth (Elizabeth is the "hot" one). Not to mention, he brings home Denise Richards to the U.K. for his friend Tony.

The scene where he meets these women in the bar is ridiculous on purpose (the girls are so poor they only have one little bed and they "can't even afford pajamas!"), so I could just accept it for the joke that it is, but every time I watch the film, I wish this entire plot wasn't in it. Not only are all these American women outrageously attractive, they also are all game to have sex together with a British man they just met because he has a "cute" accent — and that, my friends, is sexist. Yeah, there are worse stereotypes to have, but portraying all American women as willing to jump into an orgy over an accent isn't fair or accurate. Plus, I doubt British women want to all be perceived as unattractive with no sense of humor when a man with no respect for women hits on them.

When I studied abroad in London eight years ago, the London Underground had this quote from the Hugh Grant prime minister character's speech up on the walls of some stations: "We may be a small country, but we're a great one too. The country of Shakespeare, Churchill, the Beatles, Sean Connery, Harry Potter. David Beckham's right foot. David Beckham's left foot, come to that."

While this is an excellent quote celebrating the British contributions to art, politics, pop culture, and sports, the context is a political speech being made by the prime minister of the U.K. Grant, as the PM, is resentful of the president of the U.S. (portrayed by Billy Bob Thornton) constantly taking advantage of England. Since the main point of Love Actually is not politics, the film oversimplifies the complex political feelings of the public due to the relationship between the actual prime minister Tony Blair and the actual president George W. Bush from 2003, when the movie was released.

The "special relationship" that Grant refers to in this scene is a term coined by Winston Churchill about the connection between the U.K. and the U.S. Blair supported the Iraq War started by the Bush administration in 2003, to the opposition of a lot of the British public, according to The Guardian. By having Grant's prime minister stick up to Thornton's bully American president, writer and director Richard Curtis seems to be mirroring those public opinions without directly referencing them.

If Curtis wanted to take a political stance in his films — even in a Christmas film — that's his prerogative. My major gripe with this scene is the fact that the only reason the British prime minister decided to denounce the American government is because the president hit on the object of Grant's affection — Natalie. Love Actually is more of a holiday romance than any other genre of film (damn the naysayers!), so Grant being motivated by love does go with that theme. But it's pretty horrifying when his character, who is in charge of the entire U.K., only took action against the U.S. because he is jealous. Not to mention the fact that the U.S. president is portrayed in such a strictly villainous, manipulative, philandering light.

Since Hollywood produces many films that insult other nations (will Germany, China, and Russia always be villains in American films?), I know that my defensiveness of America while watching Love Actually may not be completely warranted. But clearly, Americans have been ignoring the political and sexist statements against the U.S. for 12 Christmases. Because when you get rewarded with Grant dancing to the Pointer Sisters' "Jump (For My Love)," it becomes easy to ignore a little American misrepresentation.