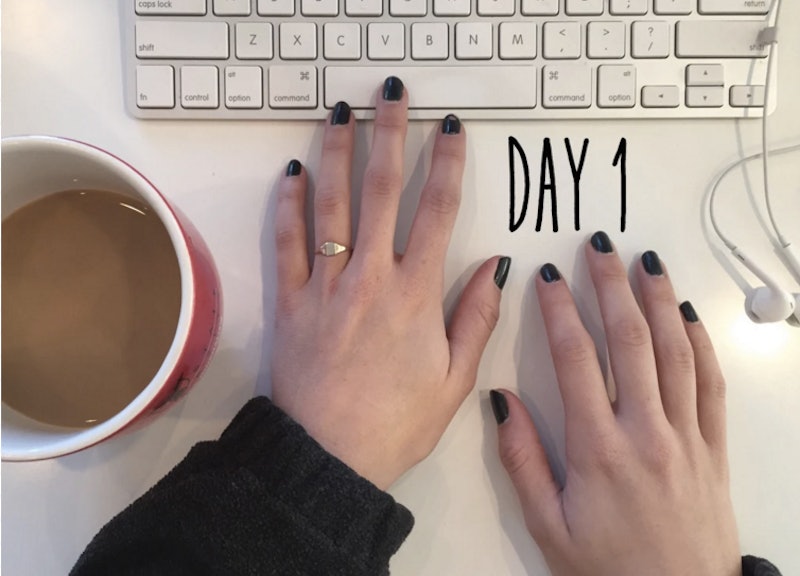 Until my senior year of college, I never painted my nails because the regular nail polish never lasted longer than a week. When I heard that gel nail polish may last longer than regular nail polish, I had to test the theory. When I did eventually began ensuring my nails were painted perfectly at all times, I noticed my nail beds were chipping, and ultimately, looked unhealthy. So I stopped painting my nails and took calcium to strengthen my nail beds again — and it worked. Besides very special events, I haven't painted my nails since then.

But there are times when I will look at another woman's nails and be totally jealous. I'll not only envy her nail art or how great they look holding a Starbucks cup in her latest 'gram, but I'll be jealous of how they pull together an outfit or highlight a great ring.

Alas, I've basically given up on appearing as a responsible adult via nail polish because my job requires much out of my nails. Constant typing chips away the polish from the tip, up. I also do CrossFit four or five days a week as research for my job, which also chips away the polish in unpredictable patterns. And finally, I just can't have nice things. But the results I yielded in this experiment may allow me to be a responsible adult after all.

I woke up early to paint my nails before work because I was so freakin' excited. To be honest, I forgot how much having polished nails affecting my mood. For some reason, I was more confident in myself and my work. Want me to send out 20 seemingly tedious emails, boss? Sure thing. I'll even read over each and every one three times. Want me to edit your photos for you? Wait until you see my photoshop skills in 20 minutes or less.

I loved the color, which I hadn't seen for almost a year, since I wore it at college graduation a year ago. I loved the start to this week. It pained me to think I was going to have to slowly watch this confidence-booster literally chip away.

I told you I can't have nice things. After a day filled with baking cookies with my family that involved whisking, mixing, lifting, pouring heavy pans, and reaching in bountiful cabinets to pull out ingredients, I chipped a small amount off my left pointer finger. No one noticed, but the imperfection was so obvious to me. I could not look at anything else.

As you can tell, things got out of control between Day 2 and Day 3. Aside from working a full 8-hour day with minimal breaks between typing on my laptop or writing with a pen, I attended an hour-long CrossFit class. Though, in CrossFit, your fingertips don't make contact with weights or a barbell, you do have the grip both rather tightly, which then yields tarnishing of the nail polish. I also did a mess of dishes this evening, which chipped away the tips.

I am left-handed, so it is interesting to notice that is the hand with the most tips, especially the index finger. Apparently I didn't learn enough about pointing from my mother.

By Day 4, the chipping was starting to affect me emotionally. We started a company-wide meeting today, and I couldn't imagine meeting various members from my company for the first time with these imperfect nails.

It was expected that I would receive a promotion at the end of our 3-day company meeting. In my head, I kept questioning, "If I can't be expected to maintain socially-acceptable looking nails, can I be trusted to oversee the launch of a new magazine?" It was difficult to pay attention during our meetings too. I found myself looking more at my nails, and looking if other people were judging my nails, more often than I was glancing at the elaborate Power Point my boss had assembled. Then I took out my frustration with my nail polish at an evening CrossFit class, which, as you can imagine, only made the situation worse.

I admit it: I was beginning to measure my ability to adult based on how my nails looked. But look at them: Not. Good.

That's right. For the sake of beauty journalism, I lasted one more day. And I regret it. Between the evening CrossFit class and unexpected car trouble, this happened. I took my car to get repaired and I had some troubles getting my car keys off the same ring as my myriad of other keys, which resulted in my nail polish peeling away.

As soon as our meetings ended, I went home and got out the nail polish remover and cotton balls.

It felt like I was born with this polish on my fingertips. They looked and felt natural. And as you can see by the bandage wrapped my hand, they survived an intense CrossFit class. I opened a blister on my hand, but my nails remained in-tact and professional.

Also, I can't stop looking at them because they're so shiny. Much shinier than regular nail polish. As I was getting them painted, I asked the nail salon owner how to best care and take off the polish (not that I had any intention of removing the color from my now #blessed fingers.) She mentioned the soaking in acetone theory, but stated the safest way to remove the polish was to go to a nail salon and have them remove the gel for you.

As for the rest of my day, I possibly had more confidence, if that's even possible, than when I applied the regular polish.

A Week and Two Days Later

I did not document each day, as I did with regular nail polish, because this was the first chip of the gel nail polish. Aside from my nails growing out – which they obviously grow at an alarming rate – there were not any chips or breaks in the polish to report. I thought I lucked out and this nail polish was going to look fabulously fierce forever.

After that first nail polish came off, it was all downhill from there. This was not recommended by the nail artist, but I picked off the rest of the polish. I couldn't stand seeing my one bare finger. And I began to notice the rest of my nail's gel polish was catching on inanimate items. All of the gel nail polish was off by the end of the day.

Don't do as I do, however. Instead, my nail artist recommended coming into a nail salon so their artists can safely remove the gel polish, without harming the remainder of your nail beds. Or to soak your nails for a significant amount of time in acetone.

Most importantly, however, I forgot what it was like to treat myself. Painting my nails is not something I typically do, because I deem it as a waste of time and money when the polish comes off so quickly. But I was so amazed at how having painted nails gave me a sudden burst of confidence, which affected my work. And I know it was not because I spent money on my nails or did a thing for the name of beauty journalism, but I actually invested in myself.

I will invest in gel nail polish again because it at least appears like it lasts longer and it felt so good, both physically and mentally, to have it on my nails. Bi-weekly alone dates to the nail salon? Sounds like a good New Years resolution to me.