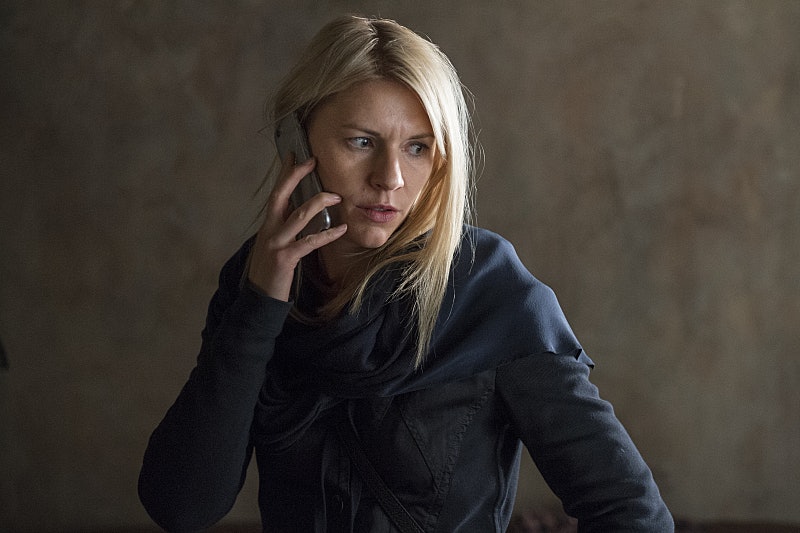 Showtime has a way of extending its original series for too many seasons beyond their prime (see: Californication, Dexter, and Weeds), but that's not the case at all for Homeland, which has already been renewed for Season 6. While it seems greedy to already wonder when Season 6 of Homeland will premiere since the season finale is on Dec. 20, Season 5 breathed new life into the CIA drama led by Claire Danes and the show has been more relevant than ever. Understandably, as many characters' lives hang in the balance (Quinnnnn!), fans want to know how long they'll have to wait for their next Homeland fix.

With a season of only 12 hour-long episodes, the wait time for Homeland's return always seems unbearable after the season finale finishes up. And since Showtime just announced the show's renewal on Dec. 9, the premium cable provider didn't give any inkling to when Season 6 will premiere. But based on the season premiere dates for all of the other seasons of Homeland, it should be back either the last Sunday in Sept. or the first Sunday in Oct. of 2016. I'm going to conjecture that it will be back on Sunday, Oct. 2, 2016, the same date that Season 1 premiered. Ahh, to remember the early days of Carrie, Saul, and Brody.

With about nine months to wait for new Homeland after the Season 5 finale on Dec. 20, here are six decisions that the showrunners should make for Season 6 to ensure it returns better than ever.

I adore Peter Quinn and the CIA black-ops agent has had a rough Season 5 (following a pretty rough Season 4) — from being a CIA hitman, to being seriously wounded by a gun shot, to getting captured by terrorists who poisoned him with Sarin gas. Right now, it looks like Rupert Friend's character may not survive Season 5 and even if he does, would the actor return for Season 6? My deepest wish for Homeland is that he does live and that the series takes it a lot easier on him in its next season.

The Return Of Astrid

Although I do not want Homeland to become some sort of love triangle or love polygon, the German intelligence officer Astrid has been a powerful ally to both Carrie and Quinn. Yes, Astrid is obviously still in love with her former lover Quinn, but she also is a competent woman who I've loved seeing team up with Carrie in the later episodes of Season 5. While I don't expect Homeland to stay in Germany for Season 6, Astrid had already been in Season 4 and I wouldn't mind actress Nina Hoss making an appearance or two for the next season.

The Removal Of Allison

Lord of the Rings actress Miranda Otto has been a master of causing trouble as Berlin CIA station chief and Russian spy Allison, but her character deserves the worst punishment she can get — banishment from the world of Homeland. She has been a great spy games adversary, particularly when it comes to her manipulating Saul, but girl has got to go — preferably by being sent to prison for a long, long time. (I guess in that case, I wouldn't mind Saul visiting her there in Season 6 just to gloat...)

Allison was a brand new character for Season 5 and while I do not want Homeland to keep recycling storylines, I'm not fond of having a new random baddie every season. Homeland will need someone giving Carrie grief in Season 6 and that person could be someone viewers have seen before. Her early antagonists Brody and Abu Nazir are dead, but there are still many loose ends when it comes to Carrie's world, including Majid Javadi, Haqqani, and Lockhart, who could all possibly make a reappearance.

Carrie Returns To The CIA

Carrie did seem to find happiness after she left the CIA and was working for the private sector, but as Season 5 demonstrated, her past life caught up to her quickly. While for the sake of the story I prefer Carrie a little mentally unstable and on top of her CIA game, I was glad to see that she loved her daughter Frannie this season and was in a stable relationship with Jonas. But since Carrie pretty much singlehandedly figured out that Allison is a spy and where the terrorist attack in Berlin will be taking place, I have a feeling that the CIA (i.e. Saul and Dar Adal) will be pleading with her to return to the agency, even if it's just as a consultant.

Four new actors were brought in for Season 5 and only one of those characters do I truly despise — Sarah Sokolovic's character Laura. I know that Otto Düring is too good to be true, but he's nowhere near as obnoxious as the self-righteous journalist. Perhaps I'm too much of a rule follower, but Laura has been causing a lot of unnecessary drama to the CIA in her efforts to expose social injustices.

With no casting information for Season 6 released yet and Friend saying that the showrunners keep things very under wraps, even to the cast, I'll have to just wait and see which characters Homeland will get rid of and bring back. But maybe the show could throw me a bone and give me some Virgil. I sure do miss that man — and I bet Carrie does too.

More like this
Ava DuVernay Thought The 'Queen Sugar' Series Finale Felt “Really Satisfying”
By Brad Witter
Will 'The Walking Dead' Return For Season 12?
By Grace Wehniainen
'Gilmore Girls’ Lauren Graham Just Revived Our Hopes For A New Reunion
By El Hunt
'Bridgerton' S3 Teases Exciting Social Season For Penelope Featherington
By Bustle
Get Even More From Bustle — Sign Up For The Newsletter