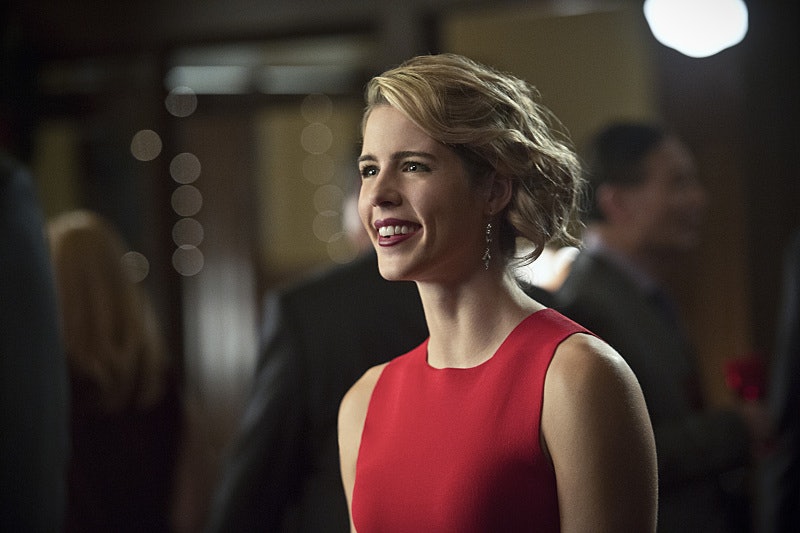 Well there is no other way to put it: the Arrow Season 4 midseason finale was a doozy. There were numerous battles, heartfelt conversations, an engagement (!), and of course, the possible murder of one the show's most beloved characters. After Damien Darhk attacked one of Oliver's campaign events, our vigilante went on the offensive calling out Darhk in the media and exposing him to the world. It was bold but a bit foolish, since Darhk quickly retaliated, sending his flunkies to kidnap Thea, Diggle, and Felicity. They made it out alive, and Oliver later popped the question to Felicity. They rode off like it was the Season 3 finale all over again, until their limo was surrounded and attacked by Darhk's men. Then Felicity was shot on Arrow, leaving many to speculate (read: lose their minds) that she is the person in the mystery grave from the flash-forward we saw in the season premiere.

I understand the concern. After all, Felicity is a national treasure at this point, but I am here to tell you that Felicity is not dead on Arrow . I not only want this to be true, but the facts support it. So here it is plain as day, the many reasons why Felicity will be alive and well once Season 4 returns.

1. The Timing Is Off

We learned during the flash-forward that these events were taking place six months in the future. Not enough time has passed to hit that deadline, unless Arrow keeps Felicity in a coma for a few months just to kill her off later, which would be too cruel (and anticlimactic).

Let's face it, Arrow can be a pretty dark show. Killing Felicity would take away one of the few sources of comedic relief it has.

When we see Oliver at the grave he is sad, yes. But not "I just lost the love of my life and the light of my world" sad. Also, I'm pretty sure Barry would be way more cut up if they were at Felicity's grave, but he seems more concerned for Oliver than anything else.

4. Her Role On Team Arrow Can't Be Filled

Star City has more superheros and vigilantes than it can handle, but seems to be lacking in the genius/tech support department. If Arrow really killed off Felicity (which, again it will not) who would quarterback the ops? They can't really call in Cisco every time they have a computer crisis. It's just not practical.

The promo for the next episode of Arrow really makes it looks like Felicity dies, but you'll notice that all of the dialogue in the trailer is from that same future scene of Oliver at the grave. Nothing new, and nothing concrete. It's more likely that the teasers are purposely misleading us so we are surprised when Season 4 returns to a recovering Felicity.

6. Star City Is No Westeros

Arrow is dark, but it's not Game of Thrones dark (thank goodness). Felicity is too integral of a character to kill off suddenly in the middle of a season.

Not to take anything away from the friendship, family, and action on the show, but I really don't see how Arrow could survive without the beating heart that is Olicity. Killing Felicity doesn't make sense for the current plot, and it certainly wouldn't help with ratings or fan feeback.

I think what we are dealing with here is a classic bait-and-switch situation. Tease it out that Felicity dies, then come at us with a gut punch we don't see coming. No matter who actually ends up in that grave, I am 100 percent sure our favorite CEO is safe. After all, Oliver Queen was supposed to die in the last Arrow midseason finale, and we all remember how that turned out for him.