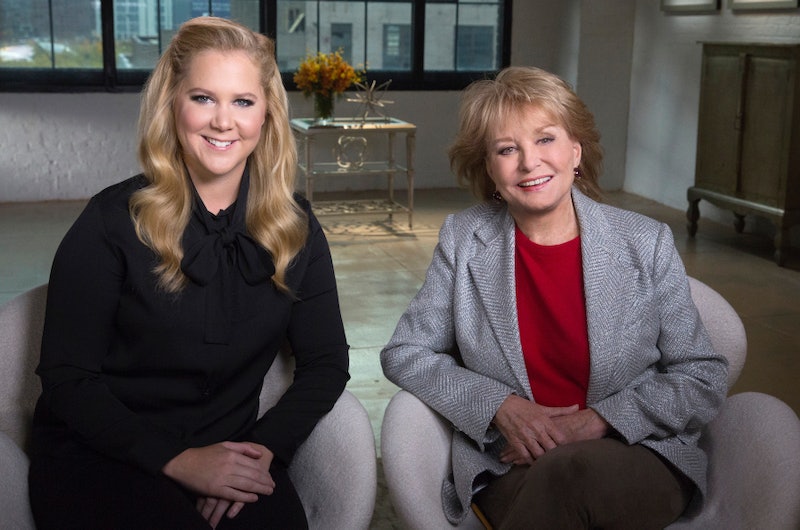 Just as it should be in the year 2015, comedian, writer, and actress Amy Schumer started off Barbara Walters Presents: The 10 Most Fascinating People of 2015 on ABC. The annual list by Walters celebrates notable people who have had a helluva year and 2015 was the year of Amy Schumer — with all of the good and the bad that goes along with that title. As Walter's noted, not only did at least one skit per episode of Inside Amy Schumer go viral every week, she also wrote and starred in her first major motion picture Trainwreck, for which she is nominated for an acting Golden Globe. But though Schumer is undoubtedly fascinating this year, she's also had her fair share of struggles.

Walters gave a brief biography of Schumer during the special, including the fact that her father was diagnosed with multiple sclerosis (MS) when she was young (a topic that Schumer explored in Trainwreck). Since then, Schumer has used her comedy to uplift her family and told Walters that she is the one who "who ties it all together." But despite her good humor, Schumer did admit that her father was not doing well and that it is very painful.

Though 2015 has been a monumental year for Schumer career-wise, it also brought extreme sadness when a gunman entered a movie theater playing Trainwreck and injured nine people and killed two. Afterward, Schumer took on the issue of gun control with her cousin, New York Senator Chuck Schumer, telling Walters, "If I can help at all, I'm going to try." And she also admitted to having "some distant sense of responsibility" because based on the shooter's views of women, she believes he targeted her film.

While Schumer has simultaneously had one of the biggest and perhaps most trying years of her life, fans of the comedian know that the fascinating Schumer is strong enough to continue making people laugh, while bringing awareness to important social issues. And in 2015, is there anything more fascinating than being (as Walters called her) a "raunchy feminist"?