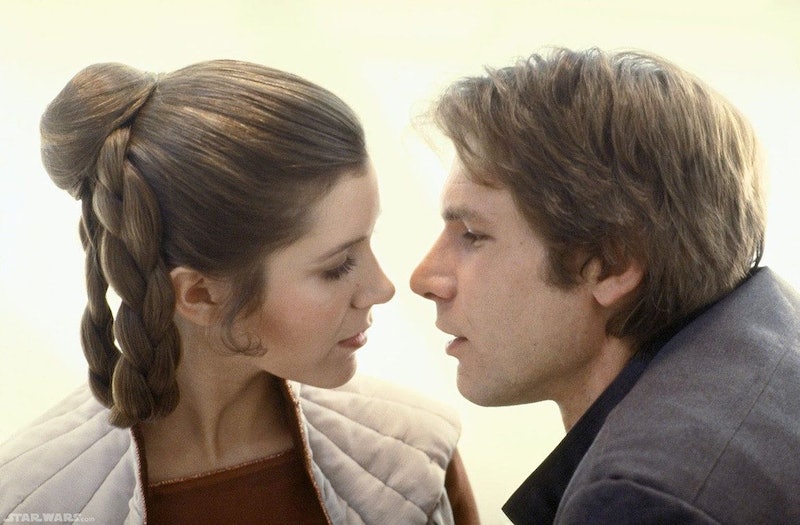 The Star Wars saga is a space opera, and what's an opera without a little romance? "Do you think a princess and a guy like me...?" Han Solo asks Luke Skywalker back in A New Hope, setting up one of the greatest 'ships in the galaxy. Even though Luke was presented as the pure-hearted hero, the original trilogy flipped the script on the traditional outcome of the "who gets the girl" quandary. I mean, yeah, Luke ended up being Leia's brother. But even if they hadn't been related, all the real sparks (save one unfortunate in retrospect kiss) were between Leia and Han. So are Han and Leia still together in The Force Awakens? Because, let's be real, that's the important question here.

After one and a half movies of bickering and flirting, Han Solo and Princess Leia made it official in Cloud City, just as the ex-smuggler was being lowered into carbonite and carted off to Jabba. They were reunited upon Han's rescue in Return Of The Jedi. With both Carrie Fisher and Harrison Ford returning to their roles in The Force Awakens, fans have been speculating on the nature of Han and Leia's relationship 32 years after they last appeared together on screen. Well, speculate no further, because I'm about to tell you.

The new characters introduced in the The Force Awakens are given plenty of time to make an impression before the OG heroes are brought back on the scene. Han's first entrance isn't exactly encouraging for fans who were hoping to see Han and Leia together and happy. He and Chewbacca are back to their old ways, smuggling, swindling, and avoiding the consequences. They meet Rey and Finn while the two are on the run from the First Order in the Millennium Falcon. So Han and his co-pilot are reunited with their ship. Well: one down.

One of the few details about the status of the original trio that was made public before the movie came out was Leia's new rank. General Organa is a key officer in the Resistance, which is what brings her and Han together again. When Han finds out that BB-8 is carrying a map to Luke Skywalker, he knows exactly who needs to see it first. Obviously, the two are living separately and are on different paths. Why? "I saw our son," Han says when he greets Leia at the base. Kylo Ren is their offspring, and he's all about the Dark Side. It's a running theme in Star Wars that losing a Jedi to the Dark Side is almost equivalent to that person dying. Han and Leia are grieving parents who each "dealt with it in [their] own way." It's not a rosy picture of the premiere couple of the original trilogy, but Han and Leia's deep, shared sadness gives the film weight. Plus, they confess to missing one another, so there's still love there.

Tragically, Han and Leia are never given the opportunity to reunite for good. Han Solo valiantly fights for the soul of his son, but is struck down by him in the process. Unlike his mother and father, Kylo Ren is weak in spirit. While he confesses a pull to the light, killing his father and giving over completely to the Dark Side is his shortcut to ending his "pain." Still, it's somewhat of a silver lining that Han Solo's last act was one of forgiveness. It went to someone who didn't deserve it, but still. That's how Leia will remember him.

Do Han Solo and Princess Leia get a happy ending? Decidedly not. But Star Wars fans can rest easy knowing that neither of them lost their bravery or compassion, even in the wake of a family tragedy.