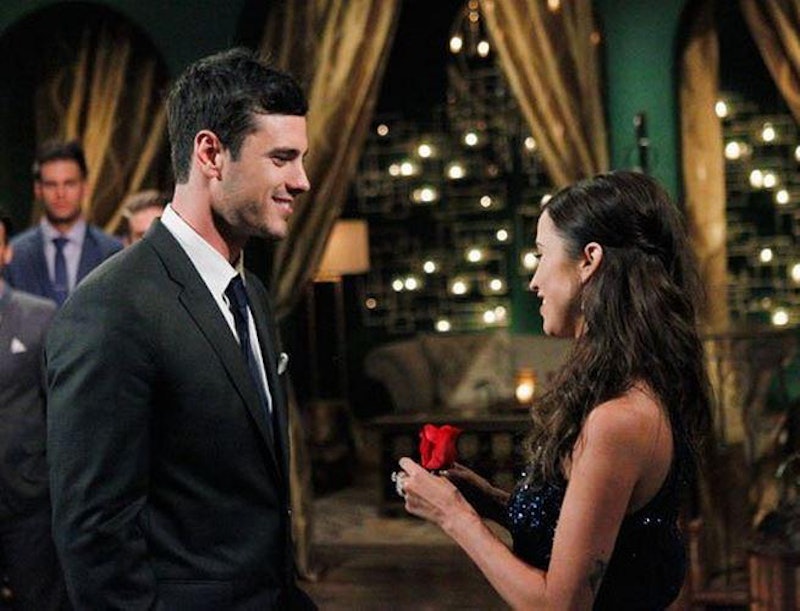 So you miss ABC's most dramatic television show in history, huh? Same. With The Bachelor hiatus in full swing — as in, still happening — I'm feeling a bit (a lot) antsy for the upcoming season to just happen already. Hasn't it been like three years since Shawn proposed to Kaitlyn? I'm starting to forget what Chris Harrison's face looks like/voice sounds like, and that deeply concerns me. What shows are Bachelor fans supposed to watch while we await the new season?

The new season in question, featuring last year's fan-favorite Ben H., doesn't premiere until January 4 — and I know, I know, that's not too far away. But I would be careful in underestimating how long that feels in the world of a Bachelor fan. (You know, in the world where people meet, fall in love, and become engaged in six weeks. Things move fast ‘round here.)

With that being said, here are some options for those of us missing The Bachelor. We all know that nothing will quite fill up that void — that Bachelor sized hole in your heart —the way the echoing of Chris Harrison's pitter patter on the permanently wet, cement driveway does. Nor will anything bring you the same kind of anxious joy that the rose elimination ceremonies do. But, all I really need to know is this: While we await The Bachelor's premiere, will you accept these shows in the meantime?

Lifetime's scripted series is meant to be a fictionalized behind-the-scenes drama of The Bachelor, and yes, it’s 100 percent as glorious as it sounds. The writing is on point, the drama is insane, and the faux "peek behind the curtain" storylines will make your Bachelor hearts flutter. If there's one show that's going to tide you over between Bachelor seasons, it's this one.

If you feel delight in watching the carefully concocted/staged first dates of The Bachelor, boy oh boy are you in for a treat with The Millionaire Matchmaker. It’s not in production anymore, but re-runs are often played on Bravo.

3. Anything From The Real Housewives Franchise

The Real Housewives franchise is a prime example of well-done reality TV and just like The Bachelor, the ladies of the RH world fall in and out of love. A lot. There's a reason there's about 7,000 spinoffs, and roughly 70,000 seasons. The cast members — and all of their lives — are that compelling.

Vanderpump Rules — one of the many Real Housewives spinoffs — is a lifestyle. It’s a religion. Watching these twenty something L.A. “waiters” and “waitresses” form and break romances, friendships, and ultimately seek guidance from someone who's dressed way better than everyone else feels a lot like The Bachelor, no?

Burning Love was a web series on E! that hilariously mocked The Bachelor franchise. Though it’s not on air anymore, some episodes are available on YouTube and Hulu. (Honestly, if anything, watch this one for all the celeb cameos!)

The Real World and The Bachelor are pretty much the same. Humans that would naturally not co-exist otherwise are forced to live in an abnormally beautiful house without technology, while cameras film what happens when people stop being polite, and start getting real.

Remember Bachelor Pad? The greatest Bachelor spinoff in all the land? (Sorry Bachelor in Paradise.) The Challenge is pretty similar. Just take a ton of people who have already been on reality TV, put them together in a mansion, and promise them money — that is, if they backstab and manipulate each other all in the name of "strategy." So good.

9. Who Wants to Be a Millionaire

If you are still not soothed by Chris Harrison's disappearance in your weekly television programming, check out Disney-ABC's Who Wants to Be a Millionaire — the show where Harrison holds the monetary fates of others (instead of their love lives) in his hands.

PS — it's the most dramatic game show in game show history.

Missing The Bachelor is a lot like falling in love. At first it feels like it’s going to really suck, but then, once you get through the hard times, you come out stronger, on top of the world, and coincidentally, with a more well-rounded understanding of reality TV.

More like this
Becca Tilley Confirmed Her & Hayley Kiyoko’s 4-Year Romance With A Heartfelt Note
By Brad Witter
JoJo Fletcher & Jordan Rodgers Got Married In A “Playful & Fun” Wedding
By Grace Wehniainen
Taylor Swift Knew Hayley Kiyoko & Becca Tilley Were Dating 4 Years Ago
By Grace Wehniainen
What’s New On Netflix: 'Stranger Things' & 'Somebody Feed Phil' Return
By Arya Roshanian
Get Even More From Bustle — Sign Up For The Newsletter