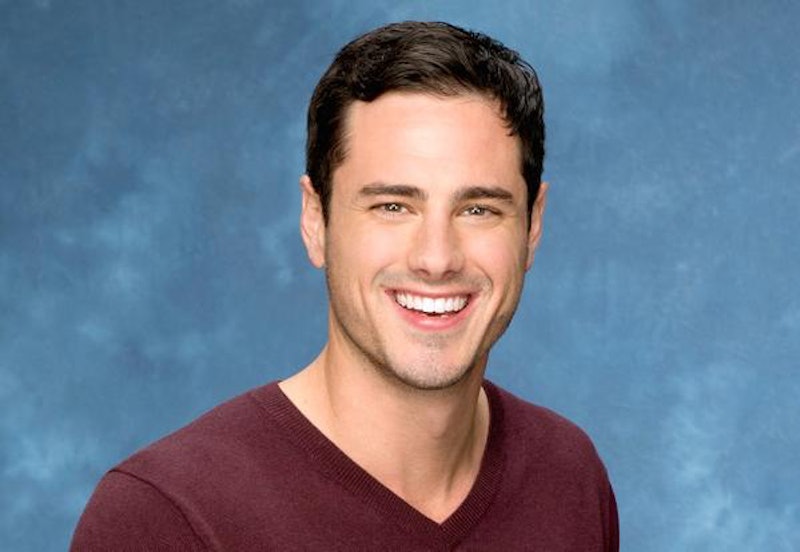 Now that they've finally announced that Ben Higgins will indeed be the next Bachelor, we officially have some time to kill while we wait for the Bachelor premiere on Jan. 4. We could fill it twiddling our thumbs, or keeping an eye on Tanner and Jade's engagement like a bunch of hawks, but, as they say, a watched couple never ties the knot, and at the end of the day, nothing makes time fly by quite like speculation. So that's what I'm personally going to turn to to make the hours and weeks and months tick by — taking guesses about what Ben's season as the Bachelor will be like.

As it happens, we have a pretty great, ready-made source for our guesses, since Ben stayed on Kaitlyn Bristowe's season of The Bachelorette almost all the way to the end, getting eliminated in third place, just before hometown dates. So, while we never got a glimpse of Ben's family, or how he interacts with them, we did spend plenty of time with him over the episodes, albeit through a television screen and with Kaitlyn as a proxy. Therefore, I feel pretty qualified to take some educated guesses about what we can expect from the upcoming season.

Even though the fact that Ben is the next Bachelor was only confirmed on Aug. 26, the rumor was out there as early as mid-July — so they're gonna have to work harder than that to keep secrets from us going forward!

2. Questions About Whether He's Ready To Be A Husband

As we've heard multiple times already, Ben is only 26, so many people wonder if he's truly ready for the level of commitment that goes hand-in-hand with being a husband.

3. Kaitlyn And Shawn Will Stop By To Give Advice

Even though Ben was competing against Shawn Booth for Kaitlyn's heart on The Bachelorette, he left the show on such good terms with both of them that I'd be shocked if the successful couple didn't drop in to give the new guy some pointers.

4. There Will Be No Interlopers

There were whispers for a second that Bachelor In Paradise's Tenley Molzahn might be making an appearance, after she and Ben were spotted spending time together. But, since Nick Viall coming in late in the game caused such a ruckus last season, I'm betting they don't want to do that two years in a row.

5. He'll Work Hard To Prove He's Not A Virgin

Remember one of the most awkward moments of Kaitlyn's season, when she asked Ben if he was a card-carrying virgin just because he wasn't champing at the bit to get in that Fantasy Suite?

Sure, there's no Ben Z. around anymore to confuse him with, but there is another Bachelor named Ben — Ben Flajnik. That means, from now on, anytime anyone goes to Bachelor In Paradise or Bachelor Pad from this upcoming season, they'll need to specify that it was Ben H.'s season, so he doesn't get confused with Ben F. The trials of a Ben are never over.

Ben hails from Denver, Colorado, so I'm imagining a date where he and his one-on-one date are promised an evening at "Denver's Most Famous Restaurant"... which turns out to be the fast-casual chain Chipotle. And they'll all laugh merrily, and he'll get to see if she's a chill girl or not.

8. He'll Have No Tolerance For Drama

The classiness of the speech Ben gave when he was eliminated from Kaitlyn's season has left me convinced that he's a respectful, solid dude who has no patience for people trying to cut each other down. Fingers crossed that he holds the female contestants on his season to the same standard that he held himself to on Kaitlyn's.

9. He'll Be Looking For His Best Friend

Like I said with the Chipotle one, I'm betting Ben is looking for a laid-back lady who's equally comfortable at a four-star restaurant and kicking back on the couch with pizza and beers. I'm anticipating lots of low-key, outdoorsy dates like hiking, which was listed in Ben's Bachelorette bio as one of his favorite activities.

10. He'll Have Some Single Moms To Choose From

Remember how great he was with kids from that reproductive system talk at the school? I was super impressed by that, and I can really see Ben wanting to start a family right away. (Yes, even though he's just 26.)

Dude falls hard, and he falls honest, and I could see in his eyes that he was genuine about being ready to propose to Kaitlyn. I'll bet he gets to the same point in his own season and goes down on one knee!

But, whether these predictions all come true or none of them, one that I'm confident in is that we're in good hands. I think it's gonna be a great season under Ben Higgins, and I have my fingers crossed that he finds exactly what he's looking for.