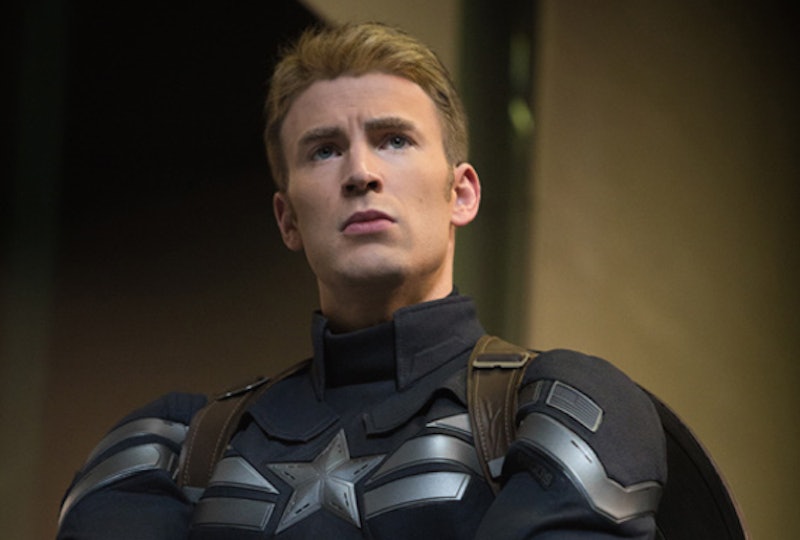 Steve Rogers is going to have a serious moment in 2016. Not only is Captain America: Civil War hitting theaters in May, but ABC is celebrating 75 years of Captain America with an hour-long special. That's right, Marvel's moral compass has been a beacon of patriotism, heroism, and the American way for seven and a half decades now. Featuring interviews with Chris Evans, Hayley Atwell, Stan Lee, Captain America creators Jack Kirby and Joe Simon, and Marvel's Agents of S.H.I.E.L.D. stars Clark Gregg, Ming-Na Wen and Chloe Bennet, among others, the special will take viewers from Cap's comic book origins to his blockbuster movies.

That's not all fans have to look forward to. Marvel promises there will be a big announcement attached to the special — they just haven't said what kind of announcement it will be. Since this is a celebration of the origins of Captain America, it could have something to do with the ongoing comic book series, or the news could impact the Marvel Cinematic Universe. As a fan of the MCU, I'm hoping for the latter, but any new Marvel news is good news. The special, entitled Marvel’s Captain America: 75 Heroic Years, is set to air Tuesday, Jan. 19 on ABC. I know that's not far off, but I have never been known for my patience. Here are five things I hope the super secret announcement will be about.

Captain America Is Stopping By S.H.I.E.L.D.

I know Marvel has its reasons for keeping the movie and TV universes separated, but as a fan, it is all kinds of frustrating never seeing the TV heroes interact with their cinematic comrades. Given how big of a Captain America fanboy Coulson is, it would be a major treat to see Coulson and Cap reunited before the big Civil War. It would also go a long way toward proving Marvel's commitment to connectivity between all of their projects.

Marvel might as well start announcing its phase four films now, and there's no better hero to kick off the next stage of superhero action than Cap. I don't think anyone wants Civil War to be the character's last solo outing. A guarantee that there is more Captain America to come would be amazing news.

Gender swapping has turned into a lucrative business for Marvel comics. The female Thor was one of the best received titles in a long time. I know I would happily read a comic book series focusing on a modern, female Cap.

Bucky Barnes Will Get His Own Netflix Series

A girl can dream, can't she? Sebastian Stan in a gritty 13 episode story of redemption where he dons Captain America's suit would be the stuff dreams are made of. Sadly, I'm pretty sure this is the longest of long shots.

An Exclusive Clip From Civil War

OK, so a clip isn't technically an announcement, but I definitely want one so I'm throwing it out there anyway. I will take any Civil War teasers I can get my hands on.

Announcement aside, the Captain America special is sure to be a fascinating hour. As one of America's key pop culture characters, seeing the origin of Steve Rogers and his heroics will make for good TV.