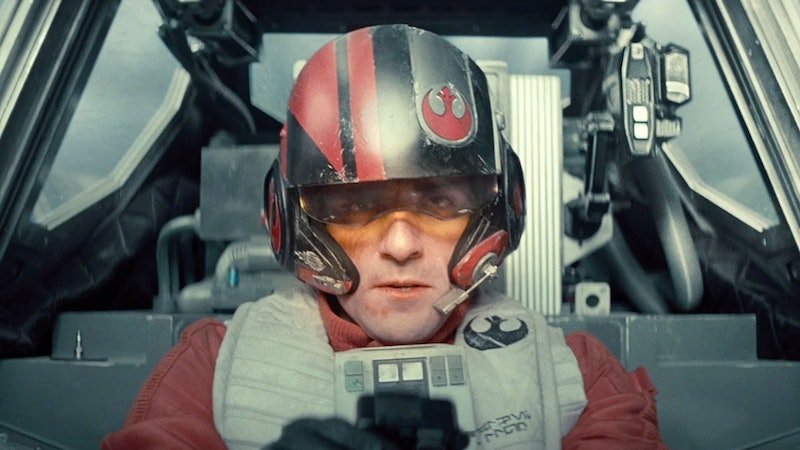 I had so many questions after I first saw Star Wars: The Force Awakens. Like: who is Rey and how can we become best friends? Why did Finn keep trying to hold Rey's hand when she clearly ran faster without his help? Lastly, and arguably most importantly (and spoiler-filled), how did Poe Dameron escape Jakku and meet back up with the Rebel Alliance? Because this is one plot hole that I am simply not letting go of anytime soon.

Quick recap of the film: Finn and Poe escape the First Order by stealing a TIE fighter. The pair then crash land on the desert planet of Jakku. When Finn awakes from the crash, Poe is nowhere to be seen. Finn finds Poe's jacket, employs the finders keepers law, and begins to wear the garment. Finn then finds Rey and BB-8 at the market, and the film's plot continues on its merry way. All the while, the audience is led to believe that Poe Dameron has died in the crash. Clearly we all knew Poe wasn't dead, as he had way too many scenes in the trailer to peace out that early, but still, that was the implication.

That is why I was not surprised that when Han Solo, Chewbacca, and Finn are surrounded by Stormtroopers, Poe is seen leading the air strike to free them. What did surprise me was Poe's explanation of how he got there. Poe claims he woke up at night (clearly uninjured) and Finn was simply gone, so, he went back to the Rebel Alliance base. Excuse me, that's not how logic works.

You see, Poe was without a droid and a spaceship — how he was able to physically leave the planet? Also, Jakku had to have been crawling with stormtroopers. I know stormtroopers are not very bright but at least one of them would have recognized Poe, a man who literally just escaped their own spaceship. So not only was he able to elude capture, but he was seemingly able to apparate off the planet. Also, his entire mission was to protect the information BB-8 held — did he spend any time looking for that cute little orange and white robot? It wouldn't appear that he did.

The creators of Star Wars: The Force Awakens don't seem too interested in answering this very important question. But no worries, I have taken it upon myself to flush out some theories of how Poe Dameron made his escape.

Maybe Poe took it old school and used some smoke signals to alert a near-by Rebel Alliance ship that he was in desperate need of a pick-up. Or better yet, since the First Order's attempt to capture Finn and Rey resulted in so much destruction, Poe could just piggy back on some of that smoke.

Poe is clearly an homage to Edgar Allen Poe. Author Poe wrote The Raven, argo Poe Dameron is secretly part Raven and was able to fly off the planet like a bird.

He Used A Cell Phone

When I am drunk, lost, and can't find my Uber, my cell phone is my best friend. I am assuming that Poe used a Star Wars equivalent of a cell phone to contact the Alliance to make his escape. There's cell service in space, right?

Yoda Picked Him Up

Yoda can do many things. I would not put it past that little green alien to coordinate travel arrangements, even in the after life.

Just kidding, Luke is only in the last 30 seconds of the film.

Now this theory is somewhat plausible. I am assuming that Poe had money. Unkar Plutt loves money. I am sure these two could strike a deal. Wait, Finn had Poe's jacket which probably had his wallet in it. Ugh, these plot holes are never ending!

Essentially, I have no idea how Poe was able to escape Jakku without being captured and without the resources typically needed to initiate transit. What I do know is that I love Star Wars: The Force Awakens and maybe, someday I will be able to let this tiny detail go. Maybe.