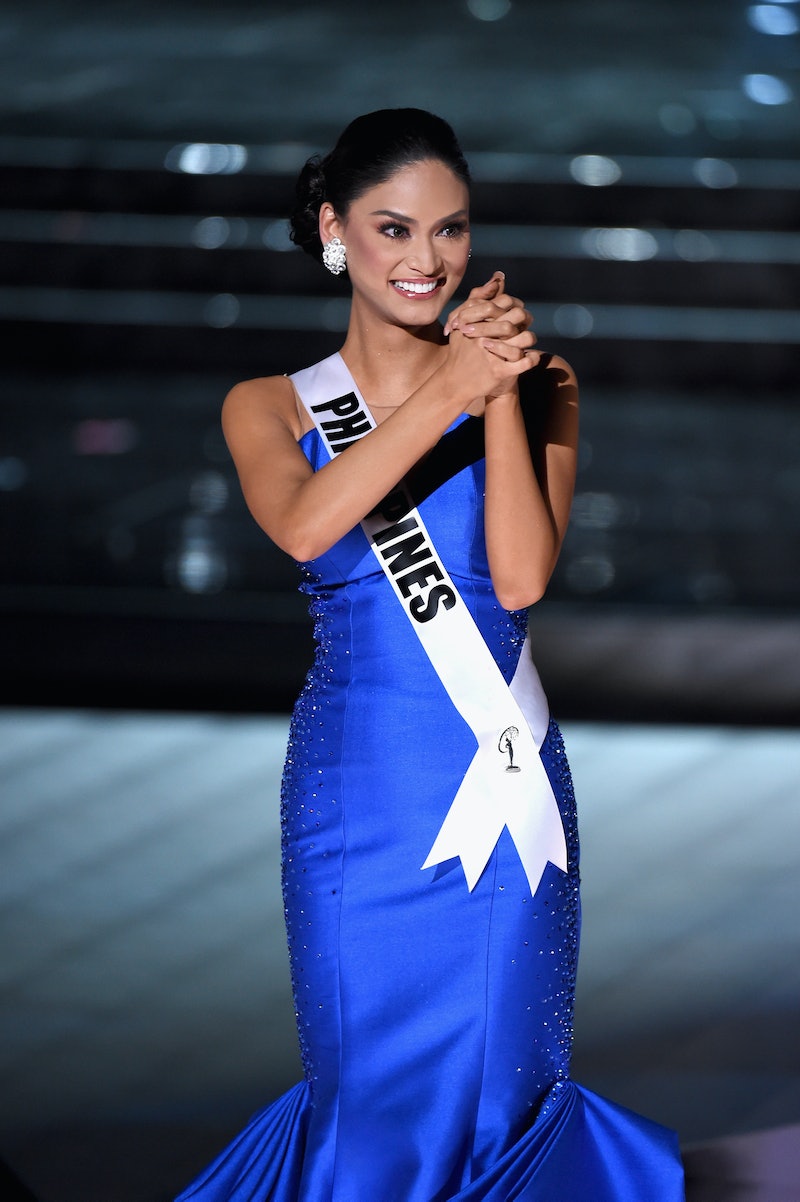 Perhaps the best part of watching any competition is seeing the behind-the-scenes action to gauge how people are reacting, especially online (just consider it people-watching on the Internet). But only one Tweet perfectly summed up Miss Universe 2015 by discussing how the Question & Answer portion has changed over the years, commending this year's choices for important political questions that directly related to each contestant's home country.

Of course, there are a lot of opinions out there, especially in the Twitter universe, when it comes to tonight's pageant. There's lots of love, but also a fair amount of hate, not to mention tons of hilarious Tweets out there too. From critiquing the contestants' national costumes to commenting on the top 15, top 10, and top five, to picking apart the swimsuit portion, the Internet had a lot to say.

Many congratulated Miss Thailand for winning best national costume via fan votes, and rightfully so. Others shined a light on Miss Japan for making history. According to the New York Times, she's the first Japanese woman of mixed race to win a major beauty pageant, and the first half-black woman to do so as well. There also happened to be a lot of shout-outs for Miss Philippines to boot.

But perhaps the most compelling and encapsulating Tweet of the night discussed how progressive this year's questions were throughout the Q&A portion:

Many were impressed at how rather than asking questions related to motherhood, the contestants were asked about actual national and global issues. Miss Australia was questioned about the legalization of marijuana in her country, and she said she was in support for medical reasons, but hoped that her government would weigh both sides equally.

Miss Philippines was asked about how she felt about the U.S. military presence in her nation, to which she said that she did not have a problem with it, as the Philippines and the U.S. have had a long-standing relationship, with some American customs still engrained in the Philippine culture today.

Miss Colombia was then questioned on what she thought the solution was to the global drug problem. She responded with the importance of education. Miss USA's question had to do with gun control in the United States, and Miss France was asked what she thought the best way to combat the threat of terrorism was, having experienced it firsthand after the Paris attacks.

Not only were the questions well thought-out, but the responses were equally as impressive as well. It was so rad to see Miss Australia stand up for the legalization of marijuana, and Miss Philippines answer with such grace. Bravo to the Miss Universe Organization for formulating important questions that display the contestants' intelligence, proving that beauty is not just an outward principal.