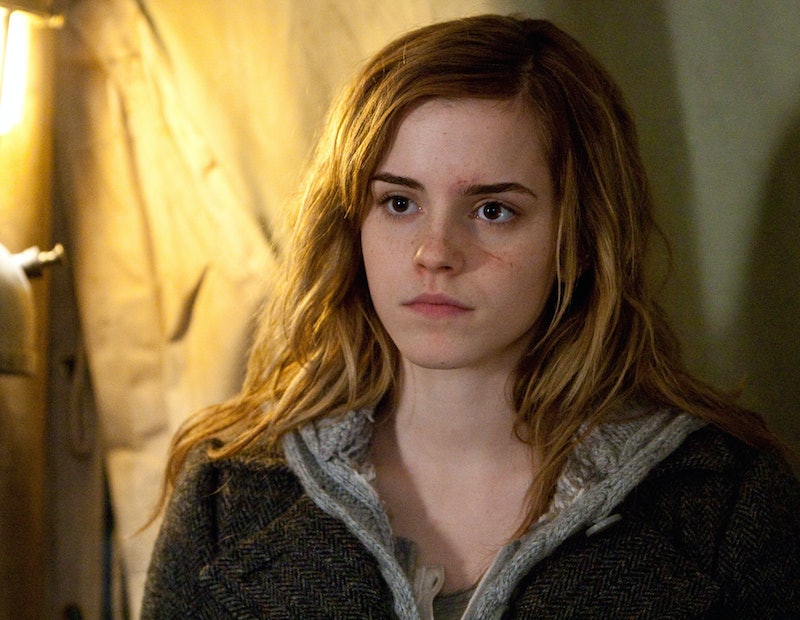 When I heard on Sunday that Hermione would be black in Harry Potter and the Cursed Child, I'm not embarrassed to admit I literally let out a screech that would have convinced the nearest paleontologist that dinosaurs were back. This wasn't even one of those times when I hopped onto the Internet to see what the rest of the world thought of this amazing development. It meant so much to me that I didn't want it tainted by people who might have reacted negatively. On Monday, J.K. Rowling supported a black Hermione with a succinct tweet informing her followers that Hermione's skin color was never once mentioned in the books, and that's when I moved from screaming straight to tears. And this time they weren't tears of joy. Instead, I was ashamed. Because the fact of the matter is that I didn't believe that Hermione was, or even could be, black until I joined Tumblr, and now I can't imagine her any other way. In fact, I'm disappointed that it took me this long — though I'm not surprised.

It's been discussed in many thinkpieces many times before, but in countries like America, where white people are in the majority in the population and in the media, whiteness is considered the norm when we are absorbing that media. If a character's ethnicity isn't explicitly made clear through codifiers like "dark skin" or "golden skin," or bearing a specifically cultural name, then readers of all nationalities will assume that the character is white. Hell, even if the character is given those codifiers, many readers will still assume that the character is white. (Remember, if you will, the controversy that surrounded Amandla Stenberg's casting as Rue, despite the fact that Rue was, in fact, specifically noted in The Hunger Games books to be black.) The aptly titled New Yorker article gave me a phrase that applied to my reading of the Harry Potter novels — "White Until Proven Black" — a reading reinforced by the casting of Emma Watson as Hermione in the films. Hermione's ethnicity was never commented on, so obviously she was white. Except... she wasn't. Not necessarily.

The only remarks that Harry makes upon Hermione's appearance is that she has untamable, frizzy brown hair, big teeth (which disappeared after a certain incident), and brown eyes. In seven books, that's all we get. In fact, when Hermione is usually first described in every book, she's always described by her hair before anything else. That really should have been my first clue. Afro-textured hair is in and of itself a codifier, because there's a marked difference between the hair of white and black people. I remember the first time I walked outside the day after getting my hair done to discover it was raining and raced back inside to get an umbrella because getting my hair wet would revert it back to its natural afro state. My white friends, who washed their hair in the shower every day and let it dry naturally, were bewildered by my sudden panic, and looked downright awed when I told them how much work went into keeping my hair straight.

You know, not unlike how much work Hermione put into straightening her hair for the Yule Ball in Goblet of Fire, so much effort that she just plain didn't have time for all of that on the regular. (Which I understand completely. My hair takes four hours at the salon at minimum to relax.)

Even more damning is the role that Hermione occupied in the wizarding world — a role that, to be honest, is exactly why I never thought of her as black all this time. Hermione is a Muggleborn, which means that she has nonmagical parents, which means that she is looked down upon by purist (re: racist) wizards who believe that Muggleborns have no place in magical society and, in some cases, that they steal magic from wizards to get their powers. Hermione proved herself to be the brightest witch of her age, something Ron and Harry frequently commented on to others, but she had to deal with a lot of racism and hatred just for what she was born as rather than for who she was. People, such as Professor Slughorn, commented on her Muggleborn heritage as if it was a disability that she overcame to become as great a witch as she was. Sound familiar?

Because of that very obvious real-world parallel, I assumed there was no way that Hermione could be black, because the racism of the wizarding world is clearly defined as not being about skin color, so why would a main character and one of the biggest on-screen victims of that racism be a woman of color? Wouldn't that be too on the nose? No, no it wouldn't be. In fact, it makes perfect sense, because, as a woman of color, Hermione would be used to combating those same attitudes in the Muggle world on a smaller scale and it provides a depth to her character to think that obnoxious know-it-all 11-year-old Hermione who memorized all of her textbooks in advance thought that being a witch would be opening a door to a new world where she would be judged solely on her merits — only to find out that it's the same story told in a different way. It adds a new dimension to Hermione having no friends early in her first year, and crying in that bathroom where she would eventually bond with Ron and Hermione over that troll. It slots something into Hermione's character arc in the story that makes perfect sense, and makes me empathize with and love her even more.

In hindsight, I don't know how I didn't see it before. I don't know how I got through seven books and eight movies without ever once considering the possibility that Hermione's journey in life was more than a reflection of my own, that we could have been walking the same exact path, except I wasn't born in England and never got a Hogwarts letter. I'm ashamed that it took me until a certain Tumblr post defending POC Hermione to see this possibility, and that's exactly why I cried to see J.K. Rowling defend the casting of Noma Dumezweni as the first African-American woman to portray Hermione using actual canon from the books. I cried because I felt ashamed to have misinterpreted that canon in the way that society taught me to, and I cried because I was happy that Rowling herself — the only authority that Harry Potter fans respect after the actual text of the books themselves — was the one to confirm that reading Hermione as only one race was an oversight that the fandom should be correcting.

Hermione Granger not only could be black, but makes more sense to me as a character if she is black. And, even if she wasn't black, no matter what race you ascribe to her, it doesn't change the fact that she is a stereotype-busting character that any woman of any color can project themselves onto and find, in her, a role model that they can learn from and grow with. The fact that her skin color is open to interpretation just makes her even better.

More like this
Daniel Radcliffe Is Shirtless In The New Trailer For His Weird Al Yankovic Biopic
By Jack Irvin
What Does Doctor Strange’s Third Eye Mean?
By Arya Roshanian
Elizabeth Olsen's Chris Evans Friendship Update Was Accidentally Hilarious
By Grace Wehniainen
Wait, Did Wanda Die In 'Doctor Strange And The Multiverse Of Madness'?
By Arya Roshanian
Get Even More From Bustle — Sign Up For The Newsletter