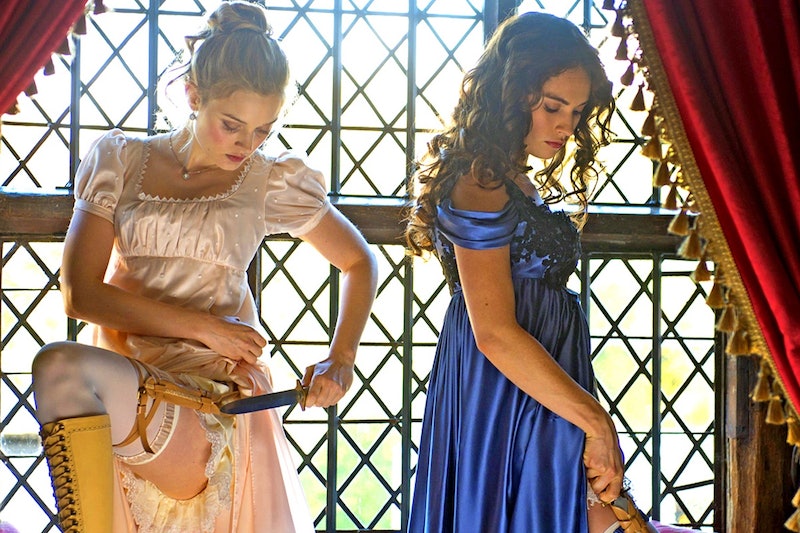 I’m always a little sad and nostalgic as another year comes to a close. Looking back on everything that’s gone by, I can’t help thinking that time speeds up more than it slows down. But that can be a good thing, when you’re waiting on something. And this year, book-lovers who enjoy seeing their favorite series on the big screen have a lot to look forward to.

Hollywood loves to make book-to-movie adaptations, probably because bestsellers are already… well, bestsellers. 2015 was a great year for literary films: The Duff, Insurgent, Paper Towns, Mockingjay, and The Martian were among the books that arrived on the big screen. My personal favorite was the movie adaptation of Thomas Hardy’s Far From the Madding Crowd, which I drove an hour to see due to its limited release. Definitely worth it.

And this year will be no different. There are already a slew of films based on your favorite books that are due to be released this year, most with trailers available so you can get excited, and then sadly realize how many months you have to wait for the movie to come out. Still, there’s so much to look forward to, that this year is sure to be another great one for literary films.

This adaptation of a popular YA sci fi novel is about Cassie Sullivan (played by Chloë Grace Moretz), a teenage girl who's living in alien-invaded Earth. Fans of the series (and fans of The Hunger Games and Divergent) will want to mark their calendars.

2. Pride And Prejudice And Zombies (Feb 5)

The mashup of Jane Austen and zombies is coming to the big screen, y'all. And as much as I love Jane Austen and think Pride and Prejudice is perfect on its own, the trailer looks pretty hardcore. Plus, Cinderella actress Lily James stars as Elizabeth Bennet. Only thing this movie's missing is Colin Firth.

This upcoming film is an adaptation of The Taliban Shuffle: Strange Days in Afghanistan and Pakistan, a memoir by journalist Kim Barker. It stars comedy queen Tina Fey, and if the trailer's any indication, this film will have you feeling all kinds of emotions.

This animated adaptation of Antoine de Saint-Exupéry's classic novella has a star-studded voice cast, from Rachel McAdams to Paul Rudd to Marion Cotillard. It was released in France in 2015, and will make its way to U.S. theaters on March 18 (and check out the trailer in French — it's pretty stunning).

The final movie in the Divergent series comes out this year on March 18th. Shailene Woodley and Theo James reprise their roles as Tris and Four in what looks to be a fittingly epic conclusion. And we'll finally see if the book's ending backlash changes the way the movie ends.

Johnny Depp, Anne Hathaway, Helena Bonham Carter, and Mia Wasikowska are back in this Lewis Carroll-inspired sequel to Alice in Wonderland . It looks just as beautiful, strange, and dark as the first film. May can't come soon enough.

Roald Dahl's iconic story makes its way to the big screen this summer, in the adaptation directed by Steven Spielberg. With a star-studded cast (including comedy geniuses Bill Hader and Jemaine Clement), this one's sure to be a hit.

Patrick Ness's fantasy novel will be released in movie form this year. The children's book centers around a boy whose mother has terminal cancer, and a storytelling monster. The film adaptation has a slew of big names attached, including actors Liam Neeson, Felicity Jones, and Sigourney Weaver, so if you haven't read this one yet, better pick up a copy in time for the October premiere.

By now you've probably seen the trailer for the next film in the Harry Potter universe about 1,000 times. The sad thing is, we have to wait until November 2016 for this Rowling-penned film to hit theaters. The silver lining? You can take the time to reread the book a few dozen times (and maybe reread the HP series, too, for good measure).

This collection of three wintry love stories by John Green, Maureen Johnson, and Lauren Myracle is coming to theaters December 2016. Pick up a copy this holiday season, so next year you'll be ready to watch the movie.

Miss Peregrine's Home For Peculiar Children by Ransom Riggs is coming to theaters next Christmas! This strange tale, crafted around odd antique photographs, has a star-packed cast: Eva Green, Samuel L. Jackson, Allison Janney, Asa Butterfield, and the great Judi Dench are all attached to the project.

So if you feel blue when the holiday season is over, just remind yourself that this year will be jam-packed with movies perfect for book-lovers.