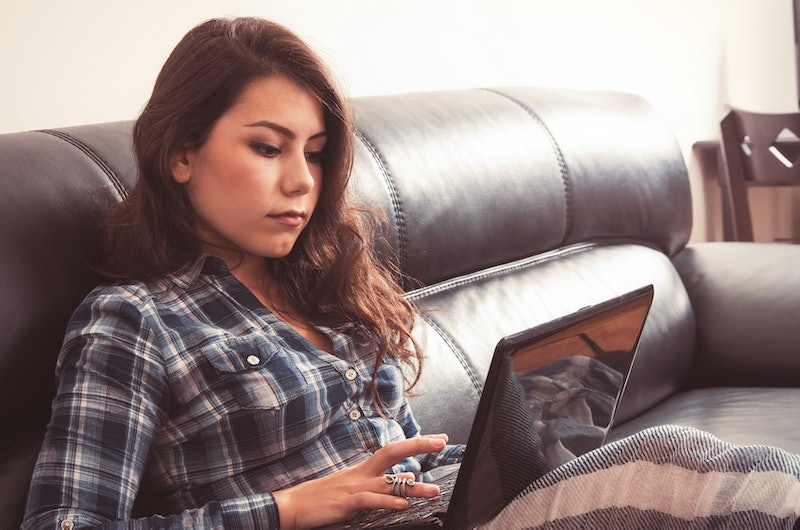 If I had to choose one method of modern online dating to forever marry myself to, I'll choose OkCupid every time. I've found more success on OkCupid than I have on any other site to date, and no, I promise that they haven't paid me to say that. Not only is it filled with attractive singles within a reasonable distance to me, I can find out more about those people than the simple one sentence bio you get on Tinder and other dating apps. OkCupid also has all of the benefits of a paid online dating site without the monthly subscription. And the real kicker? Most of the people on there actually want to date. So if you're looking for more than a hookup, this site is the place to be.

That being said, with greater dating site power comes greater responsibility, and you must use it wisely. OkCupid isn't the type of place you go if you want to swipe through for a relatively superficial match: It's a place that takes time and a bit of commitment to creating a good profile and hunting down prospective matches in order to be successful. The biggest mistake you can make is not taking advantage of OkCupid's compatibility features; unlike Tinder, OkCupid actually works to try and find someone you'll have something in common with. And with that in mind, here are the details on the OkCupid mistakes you should avoid making.

1. Not Taking The Time To Fill Out Your Profile

As I said, OKCupid is giving you a profile for a reason, so take the time to actually fill it out. You may believe that no one is reading it, but a lot of people do take the time to see what you've written. Not only will it help clue other people in to some of the specifics of who you are, it'll help attract people with similar interests. And it makes it easier for them to reach out to you.

2. Forgetting To Answer The Compatibility Questions

Don't ignore this feature— it's one of the major things that sets this site apart from others. It's really awesome that OkCupid has a series of compatibility questions, and taking the time to answer them helps you out tremendously when navigating the site. Based on those questions, OkCupid will show you a percentage rating on each of your prospective matches to clue you in to how similar the both of you are based on your respective answers. The questions will also tell you what values you have in common when you click on their page. As a result, you have better knowledge of who you'll vibe with later on, and who you're likely to want nothing to do with. Can't say the same for Tinder.

3. Not Downloading The App

From my own experience on OkCupid, the app is a lot easier to use, but still retains all of the most important aspects of the site. The app also makes it easier to browse potential matches, and for all of you who do love swiping, the app has that feature too.

If someone writes it, they obviously want you to read it, so why not take a second to look? If you take a moment to read someone's OkCupid profile, you'll get a feeling for what they're looking for, which can save you the awkward conversation later on. Also, getting a feel for their personality may make them more attractive to you.

I have come to use the “Like” feature religiously on OkCupid because it helps establish if I'm a mutual match with someone before I send the initial message. On Tinder, you'll know someone's instantly attracted to you because they swiped right but on OkCupid, you're free to message whoever, so you don't know until you talk to them. That is, unless you both “Like” each other. It means less of a chance of getting shot down.

6. Not Using Someone's Profile As Material For Your First Message

Let's be real: Saying “hey” is boring, and probably won't get you very far when trying to get to know someone. If you read someone's profile and lead in with a question, or comment on it, you'll immediately launch into a more natural, interesting conversation.

As hot as that one guy or girl mountain biking in his default pic might be to you, you should probably take the “14 percent match” into consideration before messaging them. When someone has a low compatibility percentage and a high enemy percentage, it's because you have little things in common. And, you probably disagree on some serious issues that are very important to you. My advice? Take those percentages seriously.

8. Only Putting Up One Profile Pic

I think this should be the Golden Rule of all dating apps and profiles. If you only have one picture of yourself, it makes someone less likely to actually pursue you because a) they don't have a good idea of what you look like, b) it gives off a sense of low confidence, and c) it looks like you're not putting in any effort. It sounds weird, but people can take subtle cues from someone's profile to gauge their temperament in real life, and if you're only posting one pic, you might seem a little shy or like you're trying to hide something. The more transparency, the better, especially if you're looking to meet up eventually.

9. Not Checking Who Viewed Your Profile

What's cool about OkCupid is you have the opportunity to see who is creeping on your profile before you say anything. If you looked at someone's page, and they looked at your back, there's a chance they might be interested. Also, it can clue you into prospective matches you haven't found when browsing.