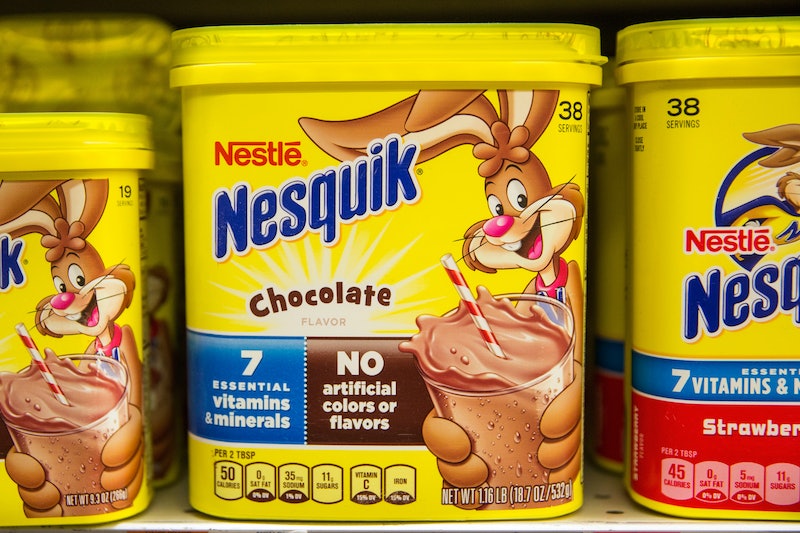 The '90s hold some of our fondest memories of music, fashion, and eats — all of which can also reveal a surprising amount about who we were and who we would become. That's right: Your favorite '90s drinks say a lot about you and your childhood, and even how you turned out as an adult. (You didn't think family and school alone shaped you, did you?) Some of these drinks don't even exist anymore, sadly, but we can still draw some unexpected conclusions from our snacktime decisions of yesteryear. What did your drink of choice say about you?

I can remember sitting in math class, exhausted after hours of long division and fractions. Every so often, I'd look to my side and see my classmate pull from his bag a bottle of water. Water. Who drank water?! I assumed he was boring, plain, and predictable. I, meanwhile, had my eyes on the soda pop and chocolate milk. Hi-C was a great midday refreshment, and it paired perfectly with Fruit By The Foot. Chocolate milk and Dunkaroos were another great combination, because hey, dessert as a snack? Why not?

What was your favorite way to hydrate in the '90s? Here are some of the decade's most beloved beverages, and what they say about you.

"Help. Get us out." -The balls of gelatin floating in your Orbitz drink.

I think Orbitz should go down in history as the most awkward phase of the '90s, like, ever. What exactly happened here? I imagine the Orbitz manufacturers sitting around a table one day brainstorming new ideas and some poor man said, "Let us suspend tiny balls of goo in a cough syrup-flavored beverage." Orbitz always reminded me of a lava lamp. Come to think of it, I think I'd prefer to drink a lava lamp, but maybe that's just me.

If you ever drank Orbitz... was it because you lost a bet?

I used to love Capri Sun so much that I was willing to deal with the maddening process of trying to get the straw in. Have you ever tried to solve a Rubik's cube blindfolded, drunk, using only your feet? That's still easier than getting the straw in your Capri Sun. If you enjoyed this flavor-packed beverage, you're likely the kind of person who loves a real challenge.

Jolt was Red Bull, before Red Bull. The selling point of Jolt was that it had twice the caffeine of a regular cola, perking the ears of anyone curious about what a heart attack feels like.

If you drank Jolt in your youth, my intuition tells me you lived life on the edge... of heartburn.

Fruitopia was awesome, because it was kind of like you were being healthy, except you weren't at all. And with exotic flavors like Strawberry Passion Awareness and Orange Undercurrent, everyone who was anyone walked around the cafeteria with a Fruitopia in hand. Water was for losers.

Squeezits didn't just taste sensational; they came in bottles shaped like cartoon character things. Does anyone remember the version that came will little pills that you dropped into the drink and they changed the color?! Squeezits turned all of us into David Copperfield.

If you drank SqueezIts, you were probably a show-off. (But with those precious little pills, you totally pulled it off.)

Nesquik made it more fun to drink milk, and... calcium, right? Meh, who cares, because chocolate?

Youngsters who drank Nesquik probably lived by one of the hottest quotes from Grease: "The rules are there are no rules." Boom.

If you drank a lot of Nesquik, you hopefully made up for it with Slice, which contained 10 percent real juices. 10! That's the equivalent of eating a single grape or something. I feel like Slice was for the rebellious ones who didn't want to buy into the mainstream. If you used to drink Slice, I bet you started reading Anais Nin and eating tofu later on.

If you drank Sunny D, you spent most of your waking hours wishing you were growing up in Southern California instead of in the landlocked state you called home. I guarantee it.

More like this
The 'Hocus Pocus' Sequel Finally Has A Release Date & It Makes Total Sense
By Shannon Barbour and Radhika Menon
Alicia Silverstone Has Recreated An Iconic 'Clueless' Scene
By Frances Stewart
On TikTok, Orange Wine Is The Varietal Of The Summer
By Madeleine Aggeler
Is The Insta-Famous Always Pan Actually Worth It?
By Jessica Goodman
Get Even More From Bustle — Sign Up For The Newsletter