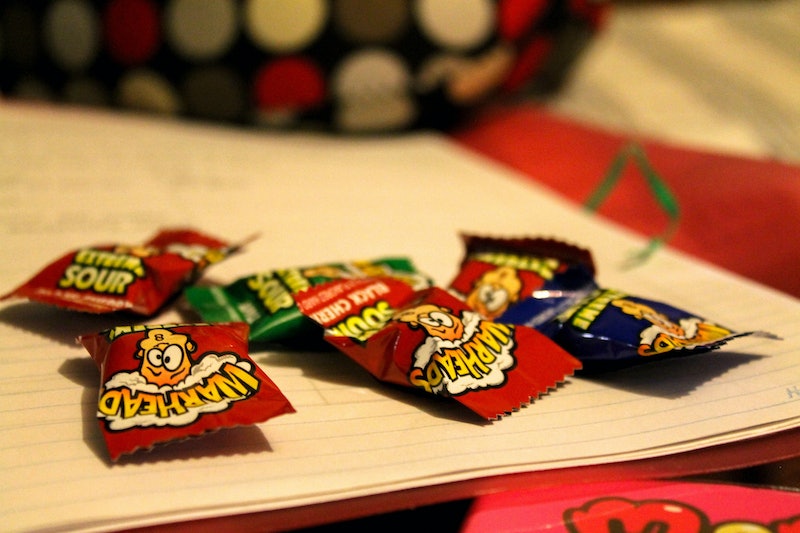 The '90s were a decade that we'll never forget, and I won't lie: A lot of that is because of the food. In fact, your '90s snack food of choice said a lot about you back then, whether you knew it or not. Sure, other unforgettable elements of the decade included skinny eyebrows (Why, God? Why?), one-hit wonders we never heard from again, and some of the best after-school TV a kid could ask for. (I'm talking TMNT, Sailor Moon, and Rocko's Modern Life.) But it was also a time of the tastiest snacks of our childhoods.

Things were so different back then. No one was worried about eating organic, gluten-free, all-natural bla bla bla. Lunchtime at school was always its own little adventure, because you never knew what your parents were going to pack. If they were in a bad mood, it'd be carrot sticks. If they were in a good mood, well, the sky was the limit.

And you could always learn more about your peers by the snacks they brought. The cool kids had Gushers. The funny kids had Fruit by the Foot, and they'd walk around with it hanging out of their mouth like a foot-long tongue. You probably remember some of your favorite treats to snack on as a kid; I know I do. Is there anything more enjoyable than taking a stroll down memory lane to revisit your favorite '90s eats? No. The answer is no. Here's a list of some of our favorite '90s snacks, and what they say about you.

Dunking the cookie in the frosting was a delicate art. If you put a moderate amount of frosting on each bite, you were likely a meticulous, organized child. Good for you. If you were one of those kids who ate the cookies naked and saved the frosting for last, odds are you were rebellious in nature, and often ended up in detention. What's that, you say? You ate all the frosting with your finger? You savage beast.

Lunchables allowed you to enjoy a fancy, prearranged meal without anyone having to lift a finger. I loved Lunchables because it meant I got to eat pizza at school... although in reality, It was more like a lunch of lies, because that? That is not actual pizza. If you ate Lunchables as a kid, your life was probably full of deceit, betrayal, and crappy pizza.

You know what they say: You are what you eat. If you snacked on Gushers as a kid, you were probably calm, cool, and collected on the outside — and gooey and sensational on the inside.

Warheads were for reserved for troublemakers and instigators. They'd have contests to see who could put the most in their mouth before they started to cry.

If you didn't care what people thought of you as a kid, you probably loved Push Pops. They were fun; they were tasty; but your saliva wold leak into the plastic part and coat your finger underneath in a sticky, sugary mess. #bosslife.

6. Fruit by the Foot

Fruit by the Foot was popular with the class clown, who would let the whole thing dangle from his mouth and whip it back and forth. I can remember a kid in elementary school wrapping it around his head. Fruit by the Foot was a blast, until you had to start picking it out of your teeth.

Look how much fun they're having! That's the essence of Ring Pops. You would get together with all your girlfriends, play Light as a Feather Stiff as a Board, gossip about boys, and enjoy good times with Ring Pops.

Fun Dip was literally sugar dipped in sugar. My mom was scared to let me have them. If you ate Fun Dip, you were probably the kid who cried when recess was over and talked too much in class.

You never ate Bugles because you liked the taste of Bugles. You ate Bugles so you could stick one on each of your fingers and wiggle them in people's faces. You probably also did a lot of theater.

This is how you can know with certainty that times have changed. These days, if your kid walked around with these, you'd probably get a call from Social Services. Regardless, back in the day, the "cool kids" would chill on the playground with one of these bad boys in between their fingers, inhaling passively and then blowing out the cloud of invisible smoke.

Anything we're missing? What was your favorite '90s treat?