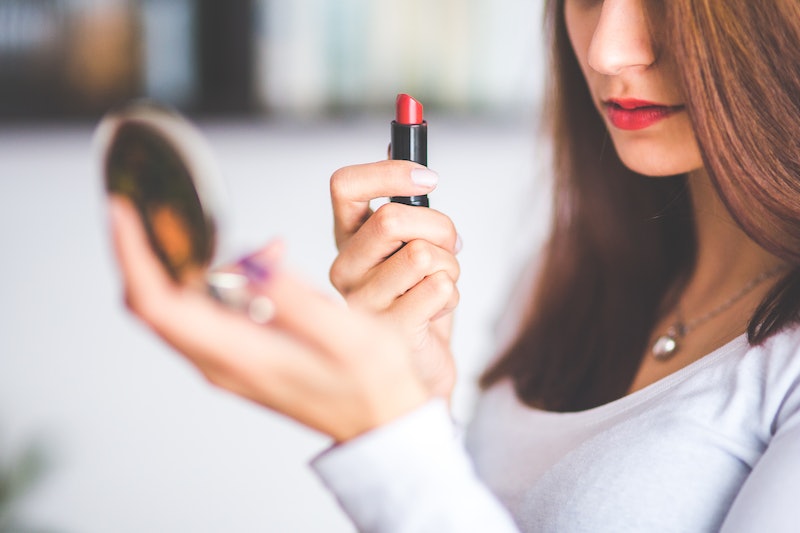 "I experience that too. Like, sometimes, I worry that my shirt isn't tucked in," a date once told me when I tried to explain one huge way gender inequality manifests today: In all the appearance-related thoughts women have. A survey by TODAY showed that women on average spend nearly an hour a day, which amounts to two full weeks a year, working on their appearances — and that doesn't even count all the time we spend worrying about our looks. This is in part because there are so many things we're taught to think about that are completely optional for men.

The tendency for women to position themselves outside of their bodies looking in, rather than in their own bodies and minds, is known as objectification consciousness or objectified body consciousness. Throughout our lives, seeing women constantly eroticized in the media and everyday life as well as denigrated for their appearances, we learn to imagine what we look like to others in every situation. Hell, I'm even picturing what I look like right now as I type this. This form of consciousness distances us from our bodies, making it hard to tell when we're hungry or tired and sometimes making it hard to even enjoy sex. Self-objectification is linked to eating disorders through shame around not fitting a cultural beauty ideal and sometimes fear of fitting that ideal, since beauty is often blamed for sexual violence.

To give you a better sense of what it feels like to constantly objectify yourself and worry about your looks, here are just a few appearance-related things women are taught to think about that men just don't have to.

While men are taught to worry about how they perform in bed, of paramount concern to women is how we're perceived: What noises will be sexiest? Which positions will give our partners the best "view" (as if women are some sort of landscape)? Should we shave "down there"? These thoughts can affect our enjoyment in the bedroom. 32 percent of women say that when they don’t orgasm, it’s because they’re stuck in their heads or focused on their looks.

As long as we're thinking about our appearances, it doesn't really matter if we're having positive or negative thoughts. Even if we're thinking, "He must appreciate how flat my stomach looks from this angle," we're still not present in our bodies or focused on the sensations.

When men get dressed in the morning, they may consider the weather and how professionally they need to dress. Here are a few thoughts that probably don't cross their minds: "What outfit will make me less likely to be catcalled?" "What will stop people from blaming me if I am sexually assaulted?" "What will prevent guys from getting the wrong idea?" "What will make my boss understand that I am at work to work, not to gain sexual attention?" These are just some of the thoughts that preoccupy many women's heads as they open their drawers and closets each day, and they stem from the dangerous (and, of course, entirely inaccurate) idea that what we wear reflects our sex lives, which in turn reflect our character.

3. How To Hide "Undesirable" Traits

"How can I make my stomach look smaller?" and "How can I make my boobs look bigger?" are also thoughts women commonly have while getting dressed. While men often just learn to deal with the fact that they don't look the way that's considered normal or attractive, women are given tools to pretend they look different. As Jenna Marbles parodies in the above video, makeup tutorials teach us to "trick people into thinking you're good looking." Magazines and clothing store salespeople tell us what is most "flattering" for our body type, which really means what will disguise it as a different body type. Just being ourselves is never okay — even models are told there is something they can improve.

All that men usually think about with regard to shaving is whether or not to shave their faces (though more and more men, unfairly labeled metrosexuals, elect to shave elsewhere). And while some people may prefer to date men without facial hair, people don't generally give men a hard time for having it. Women, on the other hand, are also expected to shave their legs, armpits, and public hair or at least bikini lines, as well as any facial hair they might have, and people harass them about it if they don't. Women are considered disgusting for having less body hair than people accept without second thought in men.

Women are taught to constantly smile for a few different reasons. One: A lot of people (e.g., street harassers) take offense when we don't position our faces in a way that they like to look at. Two: We are told to be pleasant, unimposing, polite, and soft-spoken, and smiling conveys this persona.

We internalize these pressures and learn to monitor our own faces. I, for example, learned to always hold my mouth at least in a half-smile because my lips look fuller that way. Messed up? I know! But misogyny is engrained in us to the point that we exercise it toward ourselves, sometimes leaving us preoccupied with our looks to an extent that many men can't imagine. Objectification consciousness truly is a different form of consciousness.

I do wonder sometimes, however, if men might gain a better understanding and women may feel less alone if there weren't so much shame over caring about appearance. It is scary for me to admit that I think about my looks even when I'm alone in bed with my laptop and that I manipulate my facial expressions to optimize my attractiveness. I am scared of coming off as narcissistic. But when women voice these concerns, it becomes clearer that this isn't about any individual's personality flaws; it's about larger societal oppression. I hope this article can spur other women to be open about their self-objectification and body image struggles in order to show that the problem is more common — and worse — than many people think.

More like this
Beyoncé & Madonna’s “Break My Soul” Remix Honors A Group Of Black Icons
By Stephanie Topacio Long
Your Daily Horoscope For August 9, 2022
By Mecca Woods
Myra Magdalen Is TikTok’s Queen Of Chaotic Maximalist Fashion
By Sophia Moore
The 4 Most Athletic Zodiac Signs
By Brittany Beringer
Get Even More From Bustle — Sign Up For The Newsletter