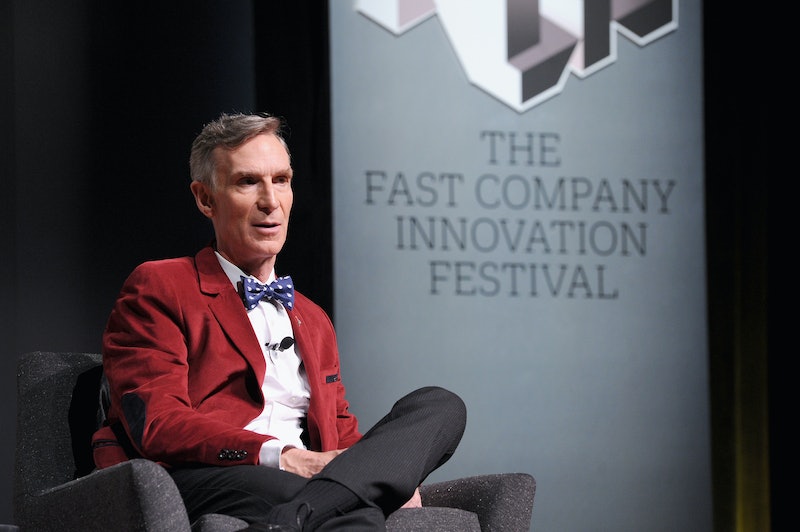 Attention, denizens of the web. As a thank-you to the Internet for supporting his most recent petition, Bill Nye made reaction GIFs of himself for everyone to use. I repeat: The Internet's favorite science educator/former engineer/badass feminist Bill Nye has made reaction GIFs for science. I don't have to be a scientist to tell you this is the greatest thing to ever happen in the history of the universe — unless Nye makes a sequel featuring equally-beloved astrophysicist Neil deGrasse Tyson, of course, but the combination of two strong forces of awesomeness might create some sort of tear in the fabric of space and time. (Science side of the Internet, back me up here.)

Admittedly, Nye had something of an ulterior motive for uploading the YouTube video featuring the reaction GIFs; he did so as a way to generate interest in the Planetary Society, an organization dedicated to advancing space science and exploration. "I'll make you a deal," he explains in the beginning of the clip. "Just check us out. You don't have to join, just check us out, and I will provide you with ten graphic interchange files, or GIFs."

(Nye, by the way, pronounces "GIF" with a hard "g," so I'd say we can consider the debate settled now. But I digress.)

The beloved scientist uploaded the video with the instructions to "steal them, repost them, modify them, have fun," which is exactly what the Internet proceeded to do. The GIFs cover a range of reactions, from the typical "lol" to... well, you'll see. Let's take a look at ten situations where Nye's reactions describe your thoughts perfectly, and if you're interested, you can join the Planetary Society here.

1. When Someone Challenges Your Taste In Music For Being Too Popular

Pretentious banjos are great and all, but they just don't compare to having a solo dance party with Justin Bieber's fantastic new album. Sorry. (See what I did there?)

2. Thinking About How Many Cats You Won't Get To Pet In Your Lifetime

But you can try your goddamn best to pet them all.

Maybe if you smash the keyboard at random, the letters will magically arrange themselves into a coherent screenplay. Weirder things have happened, right? Right???

4. Keeping An Eye On Your BFF's First Date From Across The Restaurant

Or from outside, if you're trying to be stealthy, but where's the fun in that?

5. Actually Showing Up To A Party On Time

Ah yes, the great American pastime of making small talk with a host you barely know and steadily get drunk while you wait for your only friend to show up three hours later. This is why you don't leave the house.

6. Realizing You Left The House Last Weekend So You Can Stay In For The Next Month

It almost makes up for the agony of going out last Friday. Almost.

7. When Someone Tries To Talk To You About Feelings & You Don't Want To

8. Celebrating Your Birthday On A Weekday

This was way more fun when you were in school and your parent brought cupcakes.

10. Thinking About All The Possibilities For Bill Nye Reaction GIFs

So many options, so little time.

Check out the video from which these marvelous creations hail here: