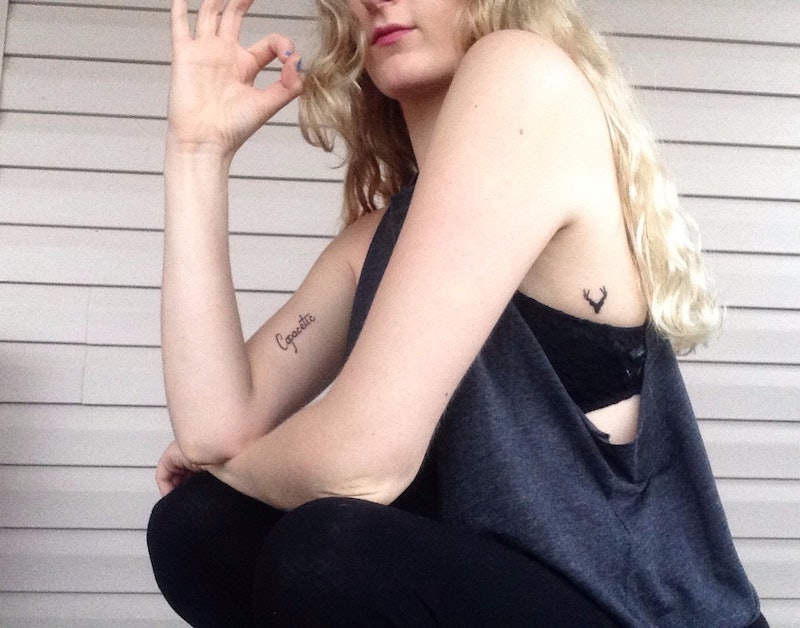 If you've ever gotten a tattoo, then you already know that getting inked for the first time comes with more than a few surprises. If you're a tattoo virgin, though, and you're seriously considering changing that, don't get too attached to your expectations — because there are some surprising things about getting a tattoo. In my limited experience, no matter how mentally prepared you think you are, or how much you've agonized over fonts and placements, or how long you've forced yourself to wait for your first tattoo, you're going to learn a few unexpected things about yourself — and just the general process of getting tattooed — before you're finished.

I've wanted to get inked with my sister since we were teenagers, but for a lot of good reasons (and a few bad ones) I waited until 25 to get my first tattoos. I needed to be 100 percent sure that my tattoo-lust wasn't just a phase, and I feared the body art that I thought was gorgeous at 18 would seem juvenile or uninspired to me within just a couple of years. (I wasn't wrong, I shudder to think of the tattoos I would have right now if I'd given in to my younger self.) I also waited because, sadly, I was worried tattooing my skin would make me less attractive to my now-ex. That said, I don't regret waiting, and you probably won't, either.

I realize getting two tiny tattoos doesn't make me an expert on the topic of body art, but now that I've finally gotten the tattoos I've wanted since before smart phones were a thing, I've discovered getting tattooed was a lot different than I thought it would be. Here are five things I didn't expect about getting my tattoos.

1. It's Not As Painful As It Looks

My tattoos are pretty small, so I'm sure getting a sleeve or a calf tattoo would be a much more painful experience than mine. That said, I still can't believe how manageable my pain was. I was able to carry on a conversation with my tattoo artist the entire time, and in my opinion, any pain you can talk through isn't all that bad.

My tattoo artist told me that it's always the customers who "work themselves up the most" that end up being the least bothered by the pain, and I think he's right. I was nervous AF about the pain, but honestly, it just felt like one long, slow cat scratch. I realize that sounds pretty horrible, but honestly, I feel like getting tattooed is less painful than having menstrual cramps.

2. ... But Healing A Tattoo Hurts More Than Getting Tattooed

If you're going to get a tattoo, be prepared for some painful aftercare. The day after I got my tattoo, I realized the tattoo-healing-process was going to be way more painful than actually getting tattooed was. It felt like I had the worst sunburn of my life, and the last thing I wanted to do was touch it, but I had to rub ointment all over it because that's a crucial part of tattoo aftercare. Ouch.

Fortunately, even this painful aspect of getting a tattoo doesn't last that long if your tattoos are small like mine. It hasn't even been a full week since I got my tattoos, and the soreness is already completely gone.

One of the reasons I was so nervous about getting tattoos is because I knew the pain wasn't going to be over super quickly. I'm used to ear and body piercings, (which, as you undoubtedly know, are over in like a second) whereas tattoos naturally take a little longer to complete. Fortunately, though, I was pleasantly surprised by just how quick tattoos can be.

Of course, my tattoos are pretty little, so if you're going to get a big tattoo your experience will probably differ from mine. That said, I was shocked by how quickly my tattoo artist finished working on me. The deer head under my arm took literally three minutes, and the script on my other arm took about 10; and now I have these gorgeous, meaningful pieces of art on my body. Definitely worth the the 13 minutes of pain.

Maybe this isn't surprising to you, but it was surprising to me. I didn't expect for my tattoo experience to feel like a feminist act, but it really did, and it still does. Over the years, so many people have told me not to get a tattoo because it isn't "ladylike," or because it would somehow set a bad example for the descendants I may never have. On top of that, I've told myself not to get a tattoo in the past just because I was afraid it would make me less attractive to my former partner. I don't think he ever would have "forbidden" me from getting a tattoo, but he repeatedly said that he'd never get a tattoo himself, and he thought women (and people in general) were more attractive without tattoos.

In a society where women are consistently told what to do with their bodies, and constantly pressured to make their appearance more appealing to the male gaze, getting tattooed while being female (if that's something you want to do) is incredibly empowering. Finally allowing myself to get these beautiful tattoos that I've wanted for so long has made me feel in charge of my own body in a way I never have. I highly recommend it.

5. I Already Want Another Tattoo

For real, though. I've always heard that tattoos can be addictive, but until I got a couple of my own, I thought that was absolute bull sh*t. It's not.

I love my new ink, and I'm going to force myself to wait a while before I get anything else done. But now that I know small tattoos aren't all that painful, and they're both gorgeous and empowering, I'm almost certain that there are going to be more tattoos in my future.

More like this
The Least (& Most) Painful Spots To Get A Tattoo, According To Pros
By Hilary Shepherd and Audrey Noble
TikTokers With Eczema Are Opening Up About Topical Steroid Withdrawal
By Kui Mwai
Kiehl’s Just Launched Eco-Friendly Cleansing Bars
By Jessica Morgan
13 Non-Toxic Sunscreens Under £35, So You Can Glow Responsibly
By Lauren Sharkey, Rebecca Fearn and Jessica Morgan
Get Even More From Bustle — Sign Up For The Newsletter