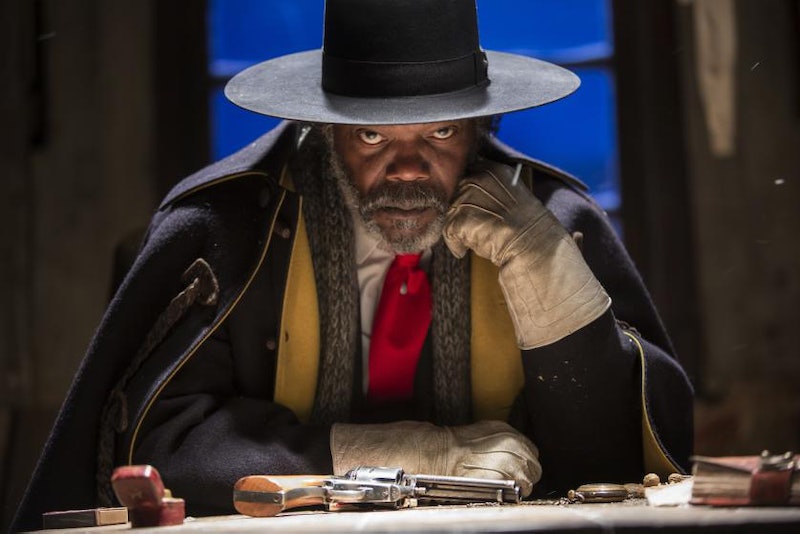 Although he's a director known for graphic violence in his movies, Quentin Tarantino made his latest film, The Hateful Eight, his bloodiest, most sadistic work yet. The violence in this post-Civil War Western is more intense than many of his previous movies — it's brutal, nauseating, and incredibly hard to watch. It's not that Tarantino's reached a new level of horror on-screen; the film's unbridled violence is what we’ve come to expect from his oeuvre. But what’s making The Hateful Eight’s bloodshed a bit more unbearable than Tarantino’s previous outings is the fact that the climate in which we — audiences, critics, casual viewers, film lovers — are watching it has changed. It's hard to sit through a film that features so much gun slinging and blood spilling and ignore the similarities it has to current events.

Humanity is no stranger to violence and war, but in the few years since Tarantino’s last film, Django Unchained, premiered on Christmas 2012, there've been a staggering amount of mass shootings and other crimes that've captivated the media's attention. A few days before Django's release, 20 children and six adults were gunned down at Sandy Hook Elementary School, and over 1000 mass shootings have taken place since then. The Boston Marathon was bombed in 2013. Movies theaters have been host to murderous gunmen. A mall in Kenya was attacked, killing 67. Hundreds were killed in the Paris and Beirut terror attacks this past November. Most recently, there were the killings at a San Bernardino holiday party, and soon, there will likely be more. The past few years have made many of us weary of the world.

It’s gotten to the point where our movie-going experiences are starting to echo real life in unwanted ways. Watching any piece of art requires a certain amount of distance or suspension of disbelief, but even the toughest film critics are having a hard time remaining objective. Last year, a film critic walked out of a screening of The Raid 2 , calling it, “So unpleasant that I realized that if I didn't race out of my seat, I may have vomited in the theater.” Now, with The Hateful Eight, many critics are pointing out just how difficult it is to watch the film in light of today's world. A writer for ReelChange said that the movie is “Really not the film we need right now. With every day seemingly bringing a new mass shooting or terrorist attack, hatred and revenge are not abstract concepts. They should not be taken lightly, or used as the basis for a glorified experiment in genre.” RogerEbert.com, meanwhile, said that “When the violence arrives in Hateful Eight, it's unmoored not just from any morality espoused by the characters (who are hateful, after all!) but also, it seems, from Tarantino's own moral compass — if indeed he has one, and after this movie I have serious doubts.”

Can you blame them? In the face of recent extreme violence and racially-driven attacks, seeing these ideas reflected in film makes maintaining objectivity nearly impossible, especially in The Hateful Eight. The film is a different kind of work than Tarantino's previous ones; the violence of the director's other movies were, in a sense, more “acceptable” because of their cartoonish, outlandish nature and the fact that there always seemed to be a hero to root for. 2012’s Django Unchained featured an ex-slave enacting revenge. In 2009’s Inglourious Basterds, the bad guys were actual Nazis. Death Proof and Kill Bill featured female avengers. In The Hateful Eight, though, there’s no one to root for, no hero to be found. Just a room full of rabid dogs ready to attack, and more racism and violence than most other films this year combined.

Still, the blame cannot be placed entirely on Tarantino, who is, after all, just trying to make the kinds of films he wants to make; like all artists, he shouldn't be forced to censer himself due to others' wrongdoing. Most of the issue I, and other critics, have with this film is due simply to bad timing, considering the constant, brutal violence the film presents. And it's not only The Hateful Eight that's hard to watch these days; when The Hunger Games: Mockingjay, Part 2 premiered just days after the terrorist attacks in Paris, the images of crumbling cities and raged gunmen attacking citizens were all too familiar. Some pundits even suggested that the sequel’s diminished box office may have come as a result of the attacks; people may not have been willing to see the cruelties of real life reflected on-screen so soon, and so vividly.

It's easy to blame The Hateful Eight and Mockingjay for showing such violence, but the real villain is timing. It’s not these films' fault for the current social and political climate. Timing is a challenge any creator takes on when putting their work out into the world, and in the case of The Hateful Eight, there was no way for Tarantino, working on the film for years, to know what current events would be like when the movie was released. Viewers must understand that when real-life tragedies occur, movies (and TV shows — just look at what's happened with Homeland , or Supergirl ) might end up reflecting them, and as a result, we might view them differently.

As consumers, we all have the right to choose our entertainment based on what we feel — there was a reason that escapist, happy-ending musical films became so popular during World War II. Others still might not want this form of escapism. Having to choose is a sad feeling, one that's bound to be felt until things improve in real life. So here's hoping they do.