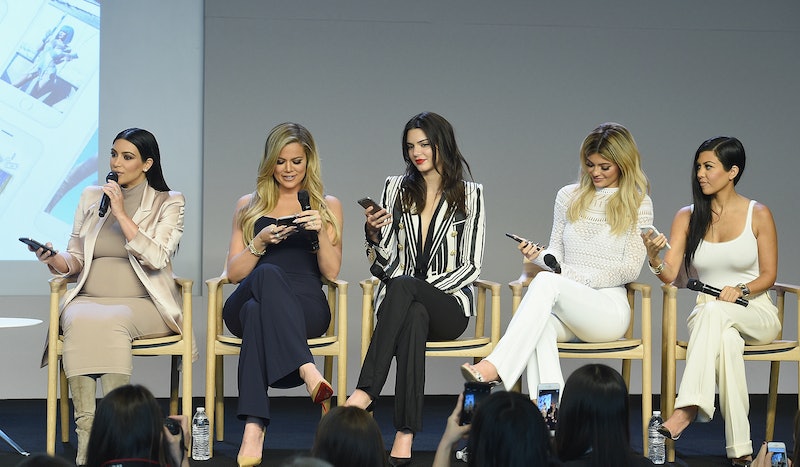 Whether you can believe it or not, the Kardashians/Jenners' body positivity was soaring throughout 2015. Critics of the clan might argue that the family epitomizes the arguably superficial aspects of social media culture and an image-obsessed society, but there were more than a few times this past year during which they all promoted self-loving, body positive ideas. While I'd never deem the celebs — none of whom has identified with the body positive movement — "body positive activists," there's no doubt that some of their actions have resonated with the community's overall goal on instilling self-love and a sense of worth in everyone.

The reality is that we're living in a Kardashian/Jenner world, where millions of people watch every move Kourtney, Kim, Khloé, Kendall, and Kylie make. So seeing these babes embrace their individuality, so-called flaws and all, to take control of their bodies can only lead to body positive, confident inspiration for the many who follow them. From sharing nipple piercings to empowering pregnancy photos, there's no doubt that the family members were delighting in being themselves this past year.

Here are 11 times the Kardashians and the Jenners were body positive in 2015. Because when everything you do is being watched and analyzed, being self-loving is arguably more difficult than ever.

When Kim K posted the above photo on Instagram, it suggested that the pregnancy of her second child was going to be a body positive one. Calling out the Internet trolls for commenting on her weight by embracing her body as it was, this image proved that Kardashian isn't afraid of loving herself.

Khloé Kardashian looked strong and confident on the cover of Complex Magazine back in August. Unfortunately, Internet trolls criticized Kardashian for the seemingly-Photoshopped images. While she didn't deny the editing, she did post a side-by-side photo of the final product next to the original, untouched version, which had no major differences in the shape or tone of her body. How's that, haters?

While some hardcore Kylie fans may have noticed the scar on her left leg before, it wasn't until a few weeks ago that Jenner openly posted about it for her 45 million followers on Instagram. The photo was simple, as was the self-loving caption. But the impact that it made — especially after being criticized for her wheelchair cover on Interview Magazine — felt like a body positive step for the 18-year-old. Jenner's image reminded folks that scars are personal and unique, and nothing to be ashamed over.

When Kendall Jenner attended a NYFW event in a semi-sheer, bodycon, white dress earlier this year, all anyone could talk about was the suspected nipple ring. She confirmed the piercing soon thereafter in a very body positive way. Jenner told Page Six that she "was going through a period in my life, having a rough time," and just went for it. Thanks for reminding us to take control of our bodies, Kendall.

There's no doubt that older sis and mother-of-three Kourtney Kardashian is a babe. And by the looks of her self-loving and body positive no makeup selfies, she's not afraid of owning it. Throughout 2015, Kourtney posted multiple relaxed, little-to-no makeup pictures that show off her natural face, bright eyes, and on fleek eyebrows.

The sister who arguably posts the most about fitness and health, Khloé published a book called Strong Looks Better Naked this year. The autobiographical self-help book got rave reviews for being motivational, encouraging, and "a body-image victory," according lifestyle website The Frisky. If you needed more confirmation that this project was a body positive one, just take a look at the book's cover.

Another body positive moment for the baby of the family was when Kylie Jenner confronted haters about her weight gain. While she later deleted the comment, the Instagram photo above was originally posted with the caption "behind the scenes. (yes I gained weight there I said it so u don't have too) :)." There's no reason for Jenner to have to say anything about her body, of course. But her unapologetic admission was a reminder that changes in weight are natural.

On her namesake app, Jenner revealed that she's had a long history and struggle with acne. She explained that her acne made her feel like "an outcast," and that it ruined her self-esteem, writing, "I realized that it's a part of life for some people and it doesn't define who you are." Preach, girl.

If you follow Khloé on Instagram, then you know that she frequents the gym. However, her routine doesn't seem to be about fitting into societal beauty standards, but far more about mental and physical health. "I have never felt 'fat'," Khloe said in Cosmo UK's Body Edition. Although there's no shame in being fat, there is arguably harm in using the descriptor on bodies for which it doesn't apply. Khloé recognizing that she isn't remotely "fat" felt like she was distancing herself from a word that actual plus size people are reclaiming for themselves.

Before giving birth to Saint West, Kardashian was rocking head-to-toe sheer ensembles, lace get-ups, bodycon outfits, and sexiness galore. Pregnant women are often given advice for minimizing their baby bumps or slimming down their changing bodies. But Kim basically said eff it and wore what she wanted.

After months of speculation and social "lip challenges," Kylie revealed on Keeping Up With The Kardashians that she does, in fact, get lip injections. If a couple of lip injections help make Kylie feel beautiful and confident, then it's no one's place to dictate the validity of her decisions.

Clearly, it's been a self-loving year for the Kardashian/Jenner families. So here's to way more body positivity from the clan in 2016.

Want more body positivity? Check out the video below, and be sure to subscribe to Bustle’s YouTube page for more self-love inspo!