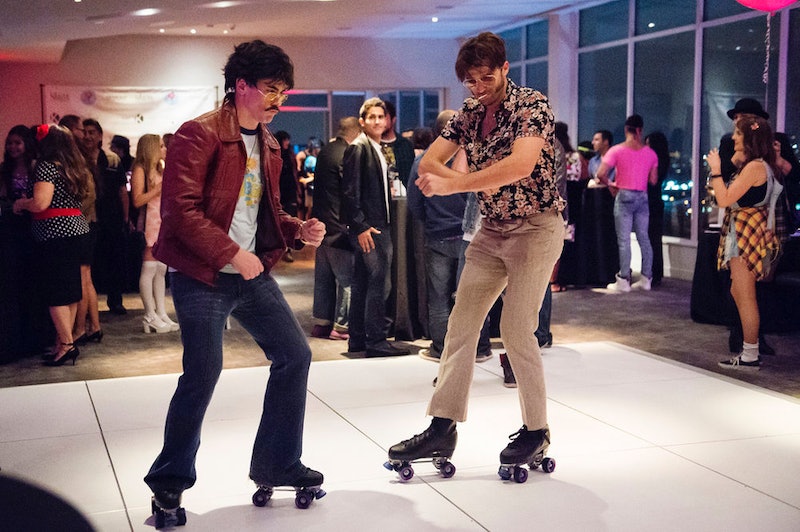 Part of growing up is having a game plan for the rest of your life, and on Vanderpump Rules, Toms Schwartz and Sandoval were trying to figure out what they wanted to do after their modeling and acting/bartending callings (respectively) were over. This season on Vanderpump Rules, the Toms finally had it — they would work for Lisa Vanderpump’s sangria brand, LVP Sangria. We’ve seen them take a few meetings on the show, but are Sandoval and Schwartz still working with LVP Sangria?

The first meeting didn’t go all that well. Lisa Vanderpump’s daughter, Pandora, and her husband, Jason, run LVP Sangria and it’s no simple family business. LVP Sangria is sold all around the world in bars, restaurants, liquor stores, and more. It's not like they make it in a bath tub. Sandoval and Schwartz came to Lisa, Pandora, and Jason with the ideas of being “ambassadors” to the brand, especially in Sandoval’s hometown of St. Louis. They would go around to bars and restaurants, getting places to carry LBP Sangria or something. I don’t know — it wasn’t exactly well thought out. Pandora and Jason sort of patted the Toms on their collective head and told them to come up with a better plan.

Now, don’t get me wrong — finding a new job is hard. But if I had a personal connection to a big brand that I wanted to work for, I would make it happen and come prepared to a meeting. Instead, the Toms wavered back and forth about “committing” to the brand (they said the word “committing” like 15 times between them), and then came to their second meeting with LVP Sangria woefully unprepared. Jason, Lisa, and Pandora noticed quickly, and they were like, “Uh, what did you bring us here?” Not much is what they brought, you guys. It was the perfect non-pitch of a pitch. The Toms slinked out of the room, but was that all for their relationship with LVP Sangria?

Sure seems like it. There’s no mention of LVP Sangria on any of the Toms’ social channels, but Sandoval did poke fun on Twitter at the fact that they were really unprepared for the meeting:

What are the Toms doing instead? Let’s find out.

Tom & Tom Are Hanging At The Casino

I'm always up for a rousing game of video poker, and it seems like Tom Schwartz is, too. Maybe he can take some of that money and use it for marketing classes.

Tom & Tom Are Showing Off Their Tattoos

When very, very drunk in Las Vegas, Sandoval and Schwartz decided to get tattoos to commemorate their love for their respective ladies. While the ladies weren't so glad about the butt tattoos, at least these guys have known pain for their love. That's actual commitment right there.

Tom & Tom Are Photoshopping Each Other

This image of Tom Sandoval is... well, it's really something. I don't know what to say about it, except that I'm disturbed. Maybe they should give LVP another shot, it seems like they may have some time on their hands.

More like this
We’ve Got A Text! Another 'Love Island' Series Is On The Way
By Darshita Goyal
Meghan Markle Just Addressed *Those* Wild 'Real Housewives' Rumours
By Sophie McEvoy
Twitter Can’t Get Enough Of The Romance In 'Ekin-Su & Davide: Homecomings'
By Sophie McEvoy
6 Of Mike Tindall’s Unfiltered & Royally Entertaining Jungle Confessions
By El Hunt
Get Even More From Bustle — Sign Up For The Newsletter