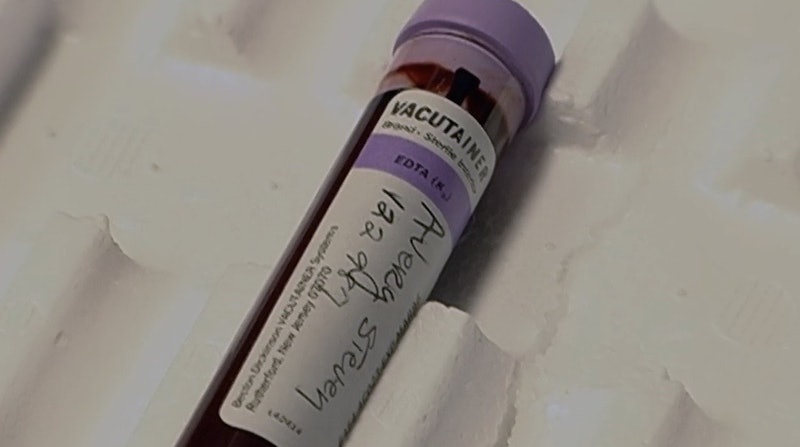 Netflix’s new true crime docuseries Making a Murderer quickly became a widely talked-about show after its December release. Although viewers of the series saw that Steven Avery was found guilty of Teresa Halbach's murder in 2007, Avery continues to maintain his innocence. Recently, Avery's defense lawyer Jerome Buting told Dateline he also thinks Avery is innocent, and laid out the case and one of his biggest concerns: Buting claimed both in the docuseries, and on Dateline, that a tube of Avery's blood was tampered with. Although Buting and his co-counsel Dean Strang argued in court, as seen in the docuseries, that Avery's blood in Halbach's vehicle was planted from the tube, ultimately Avery's blood tube was ruled to not be the source of Avery's DNA in Halbach's car.

As seen in the series, the blood in question belonged to Avery and was drawn during his 1985 trial for rape, of which he was wrongfully convicted and eventually exonerated in 2003. After he was charged with Halbach's 2005 murder, the prosecution argued in the docuseries that Avery's blood in Halbach's car was proof that Avery killed her. The defense claimed that the blood was planted by police. In the docuseries, then-Undersherriff and current Sheriff Robert Hermann denied the accusations. "It's not realistic. It's impossible ... it's so far fetched it's impractical," he said. Both sides had a lot to say about the blood in the car, so here's a rundown of the blood tube developments as seen in the docuseries.

The Defense Discovered The Blood Vial

In Episode 4 of Making a Murderer, Buting examined the vial containing Avery's blood from 1985 and noted that, on the cap of the vial, there was a "tiny little hole, just about the size of a hypodermic needle," he theorized. Later in the episode viewers saw Buting tell Strang that Buting allegedly spoke with the LabCorp technicians, and, according to Buting, "they don't do that [puncture the caps]." Buting also alleged that the police "stuck a needle through the top and planted it in [Halbach's car]," despite the sheriff department's denials.

The Prosecution Requested An FBI Test

In Episode 5, viewers saw that the prosecution requested the FBI develop a test that could show whether or not the blood in the car came from the vial.

The Defense Looked For The Presence Of EDTA

In the seventh episode, Buting explained the evidential blood samples contain a preservative chemical called EDTA to "prevent it from spoiling." During the episode, Dr. Marc LeBeau, the chemistry unit chief for the FBI, testified as to the results of the EDTA test. "We were not able to identify any indication of the presence of EDTA in any of the swabs that were submitted to our laboratory and were reported to us as being collected from the RAV4," he said, as seen in the documentary. The defense team argued that the inability to identify EDTA didn't necessarily mean it wasn't there, but that the test was possibly not fine-tuned enough to pick up its alleged presence. They then brought in Janine Arvizu, a laboratory data quality auditor, who testified to that effect.

If the results end up that you detect EDTA and you identify EDTA, that's a good indication that EDTA was present in that sample. The problem really occurs when EDTA is not detected in a blood stain. And, the problem in that regard is, from this method, I don't know whether that's simply because they didn't detect it or because it wasn't there ... It's quite possible that those blood swabs could've come from Mr. Avery's blood tube, but simply not been detectable by the laboratory.

One Expert Said The Presence Of A Hole Means "Nothing"

In that recent interview with Dateline from January 2016, Buting once again claimed that the evidence against Avery was planted by members of the Manitowoc County police department, despite their repeated denials. On the blood vial evidence, Buting claimed that he believed the sample had been tampered with, and claimed he had spotted blood "gathered between the stopper and the glass," which, to him, meant the stopper of the vial had allegedly been removed at some point. He also maintained that the hole in the lid of the vial was allegedly suspect.

Andrea Canning of Dateline interviewed Dennis Ernst, a blood collection expert who had no involvement in Avery's case or Making a Murderer, about Buting's allegations. Ernst claimed during that January 2016 Dateline interview that the alleged blood gathering around the lid was "not sinister," since the lid of a vial is, according to Ernst, not a naturally tight fit. As for the hole in the vial? "There's always a puncture mark," Ernst claimed. "The presence of a hole means absolutely nothing."

The EDTA Test Has Roots In Another Famous Court Case

The search for the EDTA anticoagulant used in the vacuum-sealed vials of evidential blood echoes another high-profile case: The trial of former NFL-player O.J. Simpson, who was accused of murdering his ex-wife, Nicole Simpson Brown, as well as Ronald J. Goldman in 1994. He was later acquitted in 1995. However, according to The New York Times, he was found liable in the resulting 1997 civil suit and ordered to pay "$25 million in punitive damages to the families." According to the New York Times, Simpson's defense team tried to disprove the Simpson's blood evidence at the crime scene by claiming that prosecutors planted the evidence from pilfered blood samples. According to The Los Angeles Times, when Detective Mark Fuhrman was asked on the stand, "Did you plant or manufacture any evidence in this case?" Fuhrman replied, "I wish to assert my 5th Amendment privilege."

As for the EDTA test results in Simpson's trial? According to FBI special agent, Roger Martz who conducted the tests, he told The New York Times, "I was asked to determine whether those blood stains came from preserved blood. Those blood stains did not come from preserved blood." But the Martz could not completely rule out the presence of EDTA. According to that New York Times article, he claimed the blood properties "responded like EDTA responded" and his findings were "consistent with the presence of EDTA." But, Martz also told the paper, "It is not appropriate to identify EDTA based on the data I have provided for the sock and the gate."

Essentially the testing, which was new in 1994, did not advance much by the time of Avery's trial in 2007, if Arvizu's testimony is to be believed. However, Avery's new lawyer, Kathleen Zellner, has said on Twitter that forensic evidence and more advanced testing is among her current strategy for Avery's defense case.