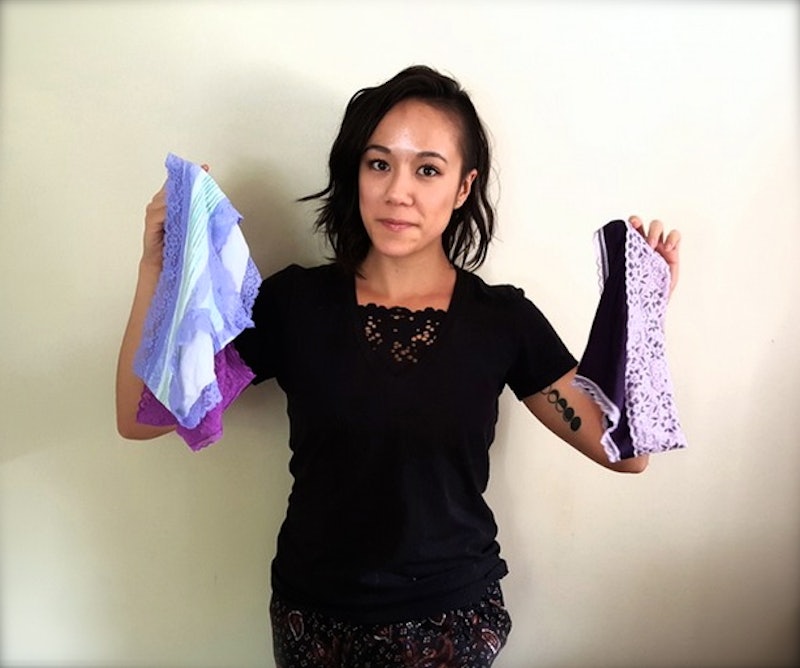 I remember the first time I saw a thong. My daredevil friend pulled a pink one out at one of her fifth grade sleepovers. My girlfriends and I put it on each others' heads and used it as a slingshot, but in the midst of all the joking around, I think we all viewed the undergarment as a serious symbol of sex. It was the first time I had ever seen or held a thong in person, and I instantly felt like a rebel. It was more than a piece of underwear. To me, it was the token I needed to one day graduate from girldom to full-blown womanhood.

Fast forward to high school. Knowing that my conservative mother didn't approve at all of such a racy piece of clothing, I stashed my secret collection of G-strings in the back corner of my closet. I wore them on the weekends and to proms, trying my best not to visibly cringe in photos. I refused to back down from the chronic wedgie; I continued to wear them well into my college years and early twenties, still convinced that thongs were sexy, irresistible things that every grown-ass woman must own if she wants to have a fulfilling sex life.

My philosophy changed, though, when I moved to Boston in 2011 and started commuting everywhere by bike. At that point, thongs were no longer useful. They became self-torture devices, in fact. And I was starting to feel less and less sexy in them, making me think twice about their role as alluring lingerie. Not long after, I learned that thongs are actually not great for your overall health. That was the final straw, the third strike that compelled me to make the authoritative decision of getting rid of all my G-strings.

1. They Can Cause Vaginal Infections

The string of a thong acts as a connector of microbes, straight from your rear to your vagina. It's very easy for bacteria to get stuck on that string, and when it moves around throughout your busy day, those unwanted germs can get transferred to your vagina or urethra. From there, your natural vaginal secretions get thrown out of whack, and you could be facing a yeast infection or bacterial vaginosis.

Dr. Jill M. Rabin, professor of OBGYN at Albert Einstein College of Medicine, told Glamour that E.coli could potentially find its way to your thong string as well, since that is the most common bacteria from your colon. E.coli is responsible for 93 percent of UTIs; although it's not a guarantee that you'll contract a UTI when you put on that satiny black thong, your chances of getting one definitely increases.

I've never had a yeast infection before, but I've had my fair share of UTIs. Since I'm in no mood to ever deal with that kind of discomfort again, I'll do everything I can to avoid them.

2. They Can Cause Skin Tags

Familiar with skin tags? They’re small piles of soft tissue that accumulate in a spot where the skin is rubbed over and over again. Women sometimes see them along the bra lines after years of wearing underwired garments, but now OBGYNs are reporting that they’re also becoming common on the vulva, near the rectum. All because of thongs.

Dr. Shieva Ghofrany, OBGYN at Stamford Hospital, told the Huffington Post that she's been witnessing more skin tags during examinations or pap smears than ever before. Nearly every patient who has them admits to being an avid thong-wearer. Skin tags are not particularly dangerous things to happen to the body, but they're not fun to have around. They look like warts and can be especially uncomfortable in a sensitive area like the vag. Plus, they have to be removed either by burning them off or through cosmetic surgery.

The chafing sensation from a thong is bad enough, but knowing that it can result in something wart-like? That's enough for me to eliminate them from my underwear drawer forever.

I regret very few things in my life, and going to yoga wearing a thong under spandex pants is definitely one of them. It was the most uncomfortable sixty minutes I’ve ever experienced. Every move I made — every twist, bend, and stretch — was wildly unpleasant, even painful at times.

Initially, I thought I had just made a tactical error by choosing to do yoga. Maybe it wouldn't be so bad donning a thong when I go for a jog or a hike, I told myself. So one day I brought a cotton, more functional thong with me to spin class, believing that the outcome would be different. As you probably so aptly predicted, it was just as intolerable as that vinyasa flow class, and I left the gym feeling miserable.

After I made the decision to never again fuse exercising with thong-wearing, I also found out that the combination is also simply bad for your health. Tight workout leggings already cut off some air circulation; on its own, that wouldn't be much of a problem. However, coupling that with a G-string might present some issues down there, since thongs already disrupt your vag's healthy balance. Merge that with lack of air circulation, and you've got a prime environment for a build-up of bacteria on your hands.

4. I Can’t Wear Panty Liners With Them

I’m a menstrual cup kind of gal, but on the lighter days of my period, I like to use panty liners. Anyone who has ever used sanitary napkins of any kind will agree with me: it's nearly impossible to pair them with a thong. Even the ones that are supposedly designed to cohabit with stringy underwear end up bunching up in weird ways, rendering themselves totally useless.

In addition to these logistical errors, there are medical reasons that deter me from mixing the two. Dr. Rabin says that the pH levels of your vag are thrown off a little when you're menstruating, so your likelihood of catching an infection increases. It's not a good idea to put a thong down there when your lady parts are already that vulnerable and double your risk.

5. They Smell Gross & Get Weird Stains

I won't lie, there have been laundry days in my lifetime when I pick up a G-string and immediately cringe at the scent of it. I've also seen some stains on the back string that are far from pleasant. Although hardly anyone talks about it, these are just natural parts of the thong experience, parts that I don't really feel like dealing with anymore.

6. I Feel Much Sexier In Other Underwear Now

I used to think that thongs were the absolute sexiest. Early on in my dating career I was convinced that there was nothing more attractive mid-hookup than a thong string peeking out. Whether this was actually true in the minds of my love interests I'll never know. But as I got older, that didn't matter to me anymore. Instead of trying to accommodate others, I started to ask myself what kind of underwear I liked best.

I experimented with just about every kind of undergarment known to womankind, eventually figuring out what it was that made me feel sexiest. Lacy boyshorts and basic full-coverage pieces are at the top of my list. So is going commando. But a thong? I definitively decided that they're not for me. So I happily tossed them all out. I know I don't speak for all women when I say thongs are the worst panties ever invented, but I'm glad I finally came to my own conclusion.