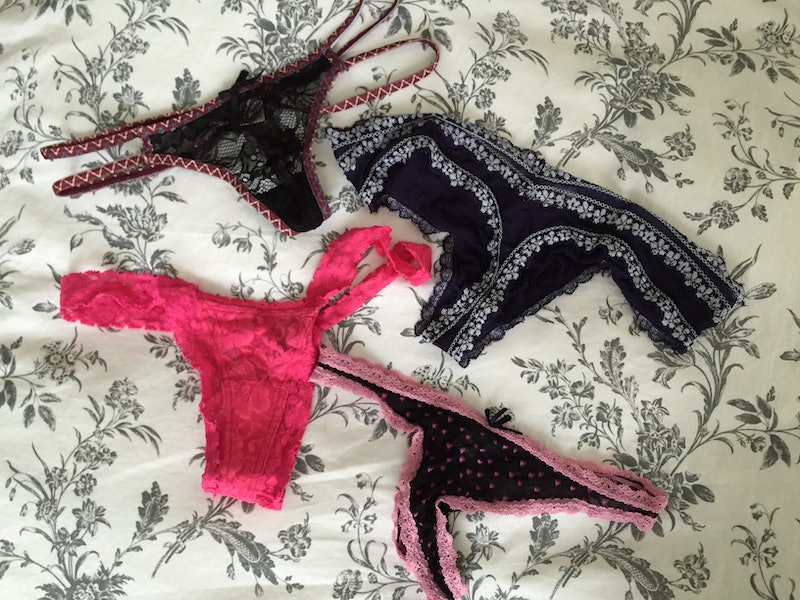 If briefs are considered paradise in the underwear universe, then thongs must be the next step to doomsday. As women who wear thongs understand — even though they're often considered uncomfortable and unpractical — they often end up being the best option for many reasons.

When it comes down to it, thongs are probably the weirdest kind of underwear ever created. They're made up of the tiniest scraps of fabric ever, they dig into your hips and your butt when worn, and they're way too close for comfort, raising both comfort and health concerns. Yet, when we're wearing a tight pair of jeans, or need to virtually look like we're not wearing underwear at all, thongs are the only answer in my opinion. No matter how horrible and terrible they are, they're just the easiest way to wear underwear sometimes.

So, from feeling like you have a wedgie all the time, to being worried if your underwear actually got lost in your tuckus, here are nine things all women who wear wedgies — erm, thongs — will understand.

Thongs are supposed to be the sexiest of underwear out there. Sure, I can see how that is. Basically your whole butt is revealed for the world (or at least the inside of your pants) to see. I just find them so uncomfortable I am convinced it would be impossible to feel sexy when wearing a thong. So nice try, thongs. Maybe another time.

2. You Live In Fear Of Bending Over

We’ve all witnessed a thong flash in our lives. You may know it all too well, because that may have been you once or twice. With jeans and other kinds of pants, it’s almost inevitable. At least the lace is cute.

3. You're Convinced They're The Only Option

If you’re wearing a pair of white skinny jeans, or any kind of tight bottom really, thongs are the only kind of underwear that you can wear without having an awkward panty line or your undies showing. Sure, you could go commando, but not everyone (myself included) is down with that breezy feel.

Anything that is considered sexy can somehow be incorporated into a thong or lingerie. Lace? You got it. Thick, sexy straps? Sure. A little key hole at the lower back? Why not. It's funny how thongs, with basically no actual fabric on them, can be designed so many different ways.

We have all been in that low moment of our lives when everything happened at the same time and there just simply wasn’t enough time for laundry. So, what happens? Well, all your comfortable, normal, human underwear is dirty, and all that’s left are those two or three ultra-sexy little thongs you randomly acquired over time. At least you'll feel sexy under that old band tee.

6. You're Often Convinced Your Butt Literally Ate Your Underwear

There's a point during wearing a thong that you wonder where it went. It's almost as if the wedgie gets so bad that you get used to the pain. I know I put a thong on this morning, but I can't feel it. It's got to still be there, right? It couldn't have fallen off, could it? But what if my butt somehow ate my thong? Is that even possible? Not really, but it feels like a totally rational thought during the thong-wearing process.

7. You Know All About Discharge

When you're wearing a thong, your underwear goes into places of your private areas that you never knew underwear could go. Thus, it makes for some pretty alarming (and gross) discharge on your panties. Oh, and we have all, at least once, seen a spot of poop on your underwear. I have been there, not even going to lie. But it's always worse on a sliver of fabric like on a thong. Blergh, I'm cringing just thinking about it.

8. You Wonder If You Should Be Extra Worried About Yeast Infections

Some studies have shown that wearing thongs can be detrimental to vaginal health. Like I mentioned before, thongs like to be super sexy and therefore are made of less breathable material, when we should always be wearing cotton underwear. Plus, the tightness combined with the little breathability thongs have only raise concerns and risks of infections and irritation. But if I don't have to worry about panty lines, it's worth it right? Maybe...

9. You Know The Realness Of A Permanent Wedgie

And last but not least, the feeling that you always have a wedgie when you’re wearing a thong. And the worry that your wedgie would eventually get so bad, that you would die. And no one wants “Death By Wedgie” in their obituary, now do they? There’s nothing cute or sexy about a wedgie, sadly.

And yet, despite all the pain you've caused me, I just can't quit you, thongs.