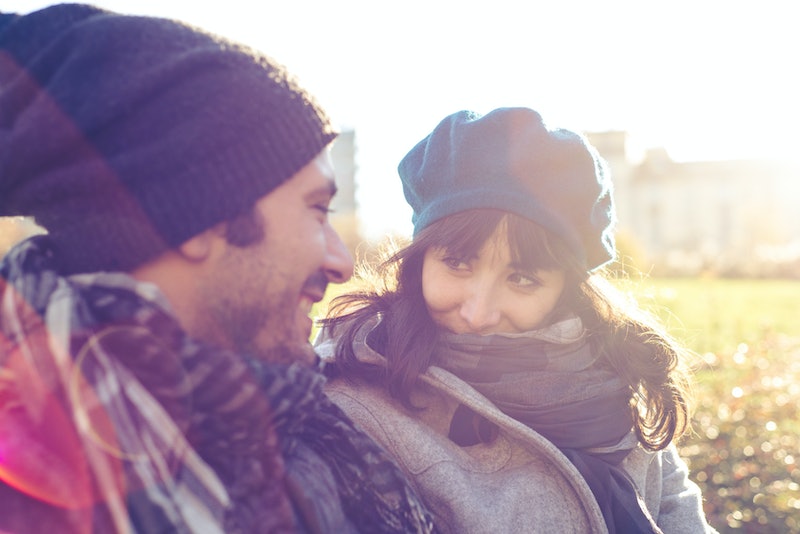 Figuring out whether someone is into you can be pretty difficult. Even if you met on OkCupid or Bumble, where it should be more cut and dried — after all, you both signed up for a dating app or site, so the cat's out of the bag in regard to your intentions — it can still be really confusing. Just because you both took the time to put on semi-nice clothes and meet in a public place in the beginning doesn't actually have any bearing as to whether this person wants to date you in any real way. All the more true if you're at a party, and you just met, and you think they might be crushing on you by giving you compliments — but then again they might just really, genuinely like your hair. And the same question can continue even as you start to date: Are they really into you?

If you're not sure whether that coffee date is just an excuse to drink cappuccinos and talk about the last book someone read or movie they saw, or if that coffee date is, in fact, an excuse to see you, because this guy or gal is sweating you hard, I feel you. Here are 45 little ways to get a read on someone and tell whether they're into you or not.

Subconsciously or not, we like to make tons of eye contact with people when we think they're attractive. If they can't stop staring into your eyes, you've got your first clue.

According to Patti Wood, a body language expert and author of Success Signals, A Guide to Reading Body Language, big pupils mean your crush is looking at you with desire. "Dilation is a brain response that occurs when you like and are attracted to something," Wood tells Cosmopolitan.

3. They Lean Toward You

They just want to be close to you! Note their body language — this will reveal a lot about their intentions with you.

We are very inquisitive when we're around people who interest us. So if they're asking tons of questions, they want to know more about you — and see more of you .

If they want to see you again sometime soon, they're into you. No one wants to commit to something next Thursday unless they actually really want to spend time with you.

They don't just ask you to come over at 2 a.m. or see if you want to grab a drink at a dive. They get tickets to shows or explore new restaurants with you, because they don't want to just be super boring — they want to come off as exciting and fun.

If there's a lot of arm-touching or "accidental," under-the-table leg-grazing, take heed: That probably wasn't an accident.

8. They Point Their Toes Toward You

Take a peek at their toes. "The feet tend to point where the heart wants to go," Wood tells Cosmopolitan. It doesn't get much more simple than that.

9. They Don't Talk About Other Romantic Conquests

Because they just want to conquest you, duh.

10. They Ask Your Opinion

11. They Invite You To Meet Their Friends

You're not just shut up in one tiny part of this person's life — after a little while, they bring you out to meet their pals. And it feels natural.

If they know you hate spiders, they're very quiet when they see a spider crawling across the table, and whisk it away without making a big deal about it, because they know you'd appreciate that.

And they're not judgmental.

14. You Seem To Put A Bounce In Their Step

You can tell when someone is happy to see you. If seeing you seems to enliven them, you're on the right track.

If they're always telling you how great you are or how nice you look, they're into you.

16. They Ask About Your Past

They want to know about where you come from, and are curious about the answers you give.

They don't just grab the tips of your fingers — if when you hold hands, they press their palm into yours and interlock fingers with you, this means they're trying to connect with you, Wood tells Cosmopolitan.

It doesn't have to be grand gestures of affection, but does she bring you a coffee after work because she knows how tired you are? Does he tell you he thought of you when he heard that song you've been playing on repeat? Little gestures go a long way.

20. They Match Their Pace With Yours

Zooming off a few steps before you isn't romantic, and means they're thinking more of themselves than of you. But if they adjust their gait and walk alongside you, Wood tells Cosmo, they're including you in their thoughts, and want to be beside you.

21. They Play Up Their Similar Interests

Maybe you're more of a bookworm and they're more of a jock, but they talk up their favorite books around you.

22. They Try To Make A Good Impression

If they don't actually care what happens between the two of you, they'll phone it in. If, on the other hand, they're trying to make what you have into something more, they'll work to show how awesome they are.

Not just "hey"s, though these can be nice too, if they're part of a greater melange. But the person who really likes you will send links, photos or other little things to remind you that they're thinking of you.

24. They Try New Things With You

Even if they hate yoga, they try it with you. Because you love it. And they're willing to attempt to love what you love.

25. They Stay Up Late With You

Even if they have to work early in the morning. Because they can't get enough of you, and they want to talk until 2.

They don't just pretend like everything is great all of the time.

Along with not pretending to be super happy all of the time, they tell you who they really are — and reveal their imperfections.

28. They Talk About What They Want

29. They Lick Their Lips

Apparently, when you're into someone, you produce surplus saliva, Wood tells Cosmopolitan. If they quickly lick their lips or press them together, this weird phenomenon may be happening.

According to M.Farouk Radwan, MSc, an "extended smile," or one that doesn't fade quickly, is real, and shows interest. "Add to this smiling for no obvious reason and you can make sure that something is going on," Radwan adds.

If you got a new haircut or changed your appearance in some way, they notice, because they're paying attention to you.

32. They're A Little Nervous When You're Around

At first, nerves can be fairly common when we're not used to someone new. If your crush appears to have butterflies when you're around, they're excited to be around you.

33. They Have Trouble Sleeping

This doesn't happen to everyone, but at the beginning of a relationship, it can be difficult to fall asleep next to someone because it's so exciting that they're there.

34. They Find You On Social Media

And they add away.

35. They Want To Know Your Digits

Not just your number, but your birthday, and other little facts about you.

Or Snapchats. In other words, they don't just text.

When it comes to plans, they just call you, instead of endlessly trying to figure things out via text.

When you text, they respond. They don't wait three days after you meet to drop a line. In other words, they think games are silly, and they want to be authentic with you.

39. They Tell You Things About Themselves

Even if they are silly or easily judged.

They answer truthfully, and they let you know who they really are.

You don't catch them going through your phone or cross-examining you.

This is a big one, though it's often overlooked: Kindness is key.

And make an effort to meet them and get to know them.

44. They Remember The Little Things

If you say you loved a particular book, maybe they bring it up again when they see an article about it, or send you the link.

45. They Want To Spend Time With You

And invite you along for the ride, whatever that ride might be.