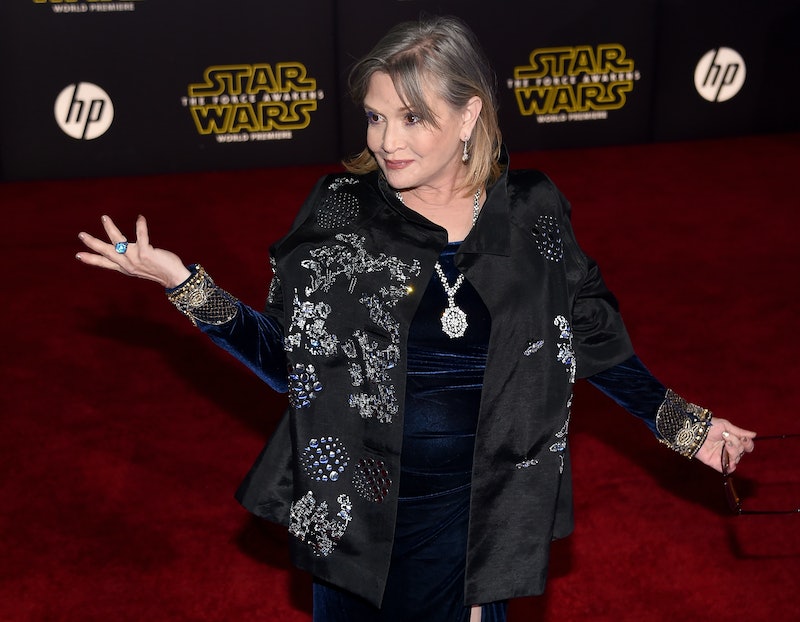 I'm not the biggest fan of Star Wars, but since the release of The Force Awakens, I have to say that I've become the biggest fan of Carrie Fisher. Princess-turned-General Leia returned in the latest film, and with the typical Internet trolls crawling out of the woodwork to insult the way she looks, Carrie Fisher's body-positive responses have spurred the final stage in my blossoming fascination with the actress. After all, there's an area of body positivity often ignored by the mainstream: ageism.

What I love about Fisher's fight against ageism isn't just what she's saying, but how she's saying it. The 59-year-old held nothing back in a number of tweets aimed at anyone discussing her age and appearance — even those offering a backhanded "Carrie Fisher's aged well" remark. The situation hasn't just shed light on how negatively women are received as they get older or how they "handle" the aging process, but also on how the same comments are very rarely directed at men.

The idea of the "silver fox" versus that of the "cougar" is a contrast that exemplifies the inherent misogyny in our society and media. While men often get praised for their gray-flecked hair and beards, the public is meant to be appalled by any woman who dares not to dye her grays away. Commenting on how "youthful" women look even into middle age or older is meant to be perceived as a compliment. Likely because all women have to offer is our youth and beauty, right?

Instead of taking these ageist and sexist comments without rebuttal, Fisher has (rightfully) fought back against them with some perfectly chosen words via her Twitter account. Her no-nonsense attitude is reminiscent of other women in the industry who have had to deal with similar issues. In particular, I'm reminded of the now-infamous Rolling Stone interview with Madonna from February of this year:

"It's still the one area where you can totally discriminate against somebody and talk sh*t. Because of their age. Only females, though. Not males. So in that respect we still live in a very sexist society [...] I always think to myself, why is that accepted? What's the difference between that and racism, or any discrimination? They're judging me by my age. I don't understand. I'm trying to get my head around it. Because women, generally, when they reach a certain age, have accepted that they're not allowed to behave a certain way. But I don't follow the rules. I never did, and I'm not going to start."

Personally, I'm ecstatic that 2015 has opened up a dialogue against ageism that can only ever add to and strengthen arguments for feminism and body positivity. Instead of allowing our society and mainstream media to belittle women for aging (as if we can help it), these stars are openly discussing not just their own feelings on growing older, but also how only women have to suffer this scorn so publicly as they age.

As my mother turns 50 next year, she has begun worrying about things that I never have to worry about. Is that item of clothing "too young?" Or do those drab, boring fleeces and skin-colored pantyhose detract from her personality? Our society undoubtedly applies arbitrary age ranges to clothing as well. The kind that result in Kris Jenner being mocked for apparently copying Kim Kardashian's style.

There's no doubt that our culture feels that as soon as a woman is over 40, she's an automatic target for mockery. And she must either be trying to look younger than she is (a negative), or looking her age (another negative). We just can't win.

There are numerous examples of the age discrimination that primarily targets women, but the most obvious to me come with Fisher's own examples. The new Star Wars film has been applauded for its feminist forward thinking, but the reactions of trolls (and even some on my own Facebook feed) have echoed ageist sentiments. I have seen no comments on Harrison Ford's age or appearance, besides the occasional heart eyes emoji. But if Leia doesn't look identical to the version of herself who sported the gold bikini, then what's the point of her character's existence?

Arguably, all of us need to rally against ageism. It's a sexist notion that furthers the idea that women are only worth their appearance and their youth. It's an idea that people are only worth something if they forever look like their 20- or 30-year-old selves. It's an idea which means that even when a talented actress makes a comeback in one of the biggest and most beloved film franchises ever made, she opens herself up to be mocked. If we want to call ourselves feminists, we cannot stand by and watch ageism happen. The least we can do is retweet one of Carrie Fisher's fabulous tweets.