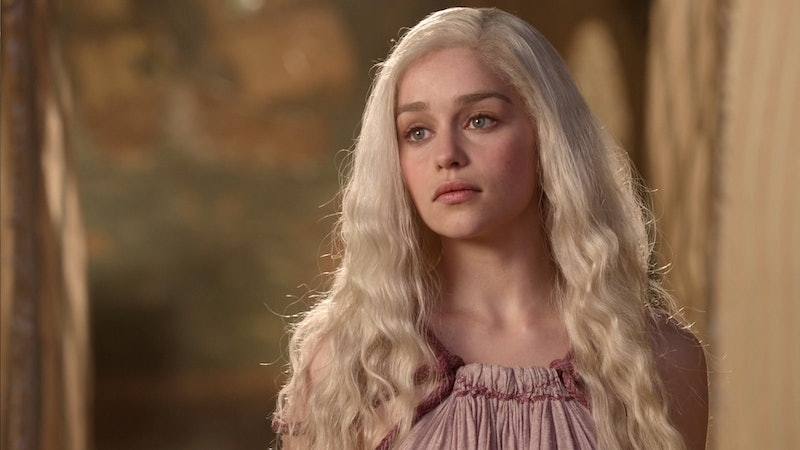 "When you play the game of thrones, you win or you die." So Cersei Lannister tells Eddard Stark in Season 1 of HBO's popular fantasy series, Game Of Thrones, anyway. And how right she was: So many claimants to the throne of Westeros have come and gone since then; some felled in battle, others slain at weddings, some slain at different weddings... not all claimants are made equal, and some proved better at playing the game of thrones than others. But, who was the best? To find out, let's rank all of Game Of Thrones ' Iron Throne contenders by the first moves they made.

Granted, the game is far from over, so it's hard to tell who's going to come out on top. And even some people who made strategic first moves have already lost the game thanks to chance, jealous brothers, or uncharacteristically dumb moves somewhere down the line. As everyone jockeyed for a better position, the chessboard got increasingly cluttered and chaotic; so the best way to judge is by comparing things back before the War of the Five Kings broke out, when there was relative peace in Westeros and all the contenders had a level playing field.

Here, ranked from the dumbest first move to the smartest, are the eight primary contenders for the Iron Throne:

His father was the King. All he had to do was sit there and wait and NOT be a total pain in the ass, and someday he would be guaranteed to be king. He was the only participant in the War of the Five Kings who actually sat on the Iron Throne, and yet he STILL lost it by being such a total jerk that he made literally everyone everywhere want to kill him. Honestly, it's a shock that he lasted as long as he did.

Poor Gendry ranks so low on this because he literally hasn't made ANY move for the Iron Throne. But that's not his fault: For most of his life, he didn't even know that he was the illegitimate son of King Robert Baratheon. But now that he's been clued into this fact — and rescued from Melisandre's clutches by stalwart Ser Davos — perhaps it's finally his time to start making plans to reclaim his father's fancy chair. If he ever stops rowing, of course.

Even if Joffrey wasn't King Robert's legitimate heir (which he wasn't), Renly still wouldn't have been next in line for the throne; that would be his older brother, Stannis. And while the youngest Baratheon would arguably have made for the best king, that doesn't make his decision to crown himself in defiance of Stannis any smarter. If he really wanted the Iron Throne, he should have let his older brother fight for it, and then kill him in a more surreptitious way after he'd finished ousting Joffrey — rather than dividing all of their forces in a pointless battle between Baratheons that gave the Lannisters enough time to consolidate their hold on King's Landing.

If we're being technical, Balon never made a move on the Iron Throne itself — he simply crowned himself King of the Iron Islands and refused to acknowledge the sovereignty of the Seven Kingdoms. But since he's one of the titular monarchs of the so-called War Of The Five Kings, he deserves to be included here... and while he wasn't as bone-headed as Joffrey or Renly, his decision to defy the Lannisters still probably wasn't the smartest move in the books. The Ironborn may be allowed to run amok while the rest of the continent is in chaos, but once everyone else gets their ish together, do the Greyjoys really have a hope of remaining independent? Their last rebellion ended up a complete embarrassment, after all.

Just because Stannis is King Robert's true and legitimate heir doesn't automatically make him infallible. The stern and stubborn Baratheon has made more than his fair share of bad moves, from allowing his quibbles with Renly to take precedence over his campaign against Joffrey, to ever listening to Melisandre. His first official move as King was one of his worst: His decision to not ally himself with Robb Stark against the Lannisters. Sure, Robb was trying to declare his own independence and therefore take some of what Stannis viewed as rightfully his... but now, instead of having six out of seven kingdoms, Stannis has ZERO. That's a lot less. I mean, fewer.

Oh, Robb. He made some of the smartest moves of any character on the show, and he still ended up dead — massacred along with his mother, wife, unborn child, and all of his troops at the world's worst wedding. (Like Balon, he wasn't officially campaigning for the Iron Throne itself, but as the King in the North, he's still considered one of the Five Kings.) His first move was pretty unimpeachable: Declare the North's independence following his father's execution, and unite the power of Westeros' single largest kingdom behind him. Of course, it all fell apart after that, but it's hard to blame Robb for not swearing allegiance to Joffrey after the boy King cut off Ned's head.

Dany's first move on her quest to reclaim the ancestral throne of her family was marrying Dothraki warlord Khal Drogo. Why does that decision rank so highly, you ask? After all, Drogo ended up dead, and Dany was abandoned by his khalasar before they even got close to Westeros. But Dany's marriage to Drogo did yield one crucial thing: DRAGONS. The three flying lizards will undoubtedly be a key component to Dany's eventual invasion of Westeros (whenever that happens), and since those eggs were a wedding gift from her benefactor, Illyrio, then Dany's first move is pretty much the strongest out of anyone's. Well, except for...

The best decision Littlefinger ever made was to do all of his maneuvering behind the scenes. While everyone else battles and backstabs their way to the Iron Throne, Lord Baelish has been quietly manipulating pieces into place since before the story of Thrones even started. Remember, he's the one who talked Lysa Arryn into poisoning her own husband, which is the event that kicked off the entire series and set every conflict into motion. Littlefinger is as power-hungry as anyone on this show — hungrier, probably — and yet he always lets other people do his dirty work for him. Don't be shocked if this tactic ends up being the most effective in the long run.

This all said, things are constantly changing on this show, so who knows if these moves will continue to help or hurt these characters in future seasons.