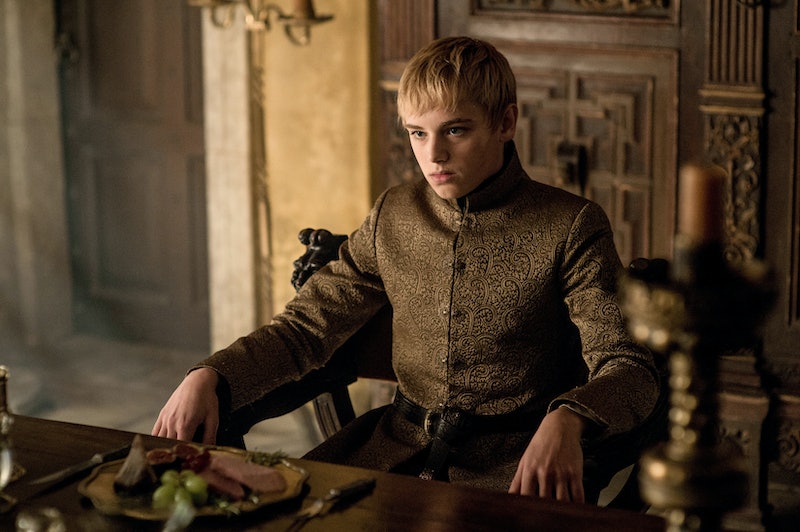 For a TV show called Game Of Thrones, you'd think that the titular chair would be of utmost importance in the minds of viewers. And yet, in the midst of all the flashy dragons and ice zombies and beloved characters dropping like flies, I fear we've all lost sight of a very important question: Who is next in line for the throne if Tommen dies? The issue of succession is actually a lot more complicated than it may appear. And it's also a lot more pertinent than it may appear, given the fact that Tommen is ranked highly on the list of characters who may die in Thrones Season 6, what with that prophecy that already claimed the lives of both his elder siblings.

If Tommen suffers an untimely death next season, neither he nor Joffrey will have left behind any direct heirs to the throne. With Robert Baratheon dead along with all three of his children, the kingship should pass to his younger brother, Stannis. But with both Stannis and his only child dead, the kingship should pass to the youngest Baratheon, Renly. But with Renly dead... As history has told us time and time again, this kind of power vacuum usually leads to bloody civil war, as everyone even remotely related to the dead king tries to make a bid for the throne.

I've parsed through the complicated family trees of the major Westerosi families and found who I think are the seven likeliest candidates for the Iron Throne:

The most likely outcome of Tommen's hypothetical demise is that Cersei would try to rule in his stead, driven by her fury and grief over the deaths of all three of her children. Drawing on her status as the mother of two kings, and with no direct heirs to oppose her, she will probably try to install herself as some sort of Regent, with the goal of transitioning into full-time Queen once any challengers to the throne are dealt with. However, Westeros has never allowed for female rulers before, so her reign will undoubtedly be disputed.

Again, women don't typically rule the Seven Kingdoms, but Dany has three dragons to back up her claim. And if Tommen dies, she won't even need to win the throne by right of conquest — she'll actually be Tommen's closest thing to an heir. The three Baratheon children are actually distantly related to the Targaryens: their great-grandmother (Robert's father's mother) was Rhaelle Targaryen. (This is, of course, operating under the public assumption that Tommen et al. are actually Robert's children and not Jaime Lannister's.) Rhaelle was the sister of King Jaehaerys II, who was the father of King Aerys II (aka The Mad King), who was the father of Daenerys... the last remaining Targaryen.

While Daenerys has the most direct claim to the throne, she also has the disadvantage of being a woman — so some may seek to find the closest male heir, even if they have to take a more indirect path to get there. Ignoring Robert's side of the family tree, since that led us to Daenerys, let's follow Cersei's. She can't rule because she's a woman, her brother Jaime can't rule because he's sworn to the Kingsguard, and her brother Tyrion can't rule because he's a traitor who fled to Essos and could be dead as far as anyone in King's Landing knows. That's it for their generation. Going up the ladder, their father Tywin is dead so the line would pass to his eldest brother, Kevan. Kevan's eldest son is Lancel... who has recently become something of a religious zealot. A servant of the Faith becoming King of all Westeros would certainly be appealing to the power-hungry High Sparrow. He could very likely throw the weight of his title behind Lancel's claim to the Iron Throne.

Arriving at Lancel as the heir to the throne requires passing through Cersei, the female line of the Baratheon children, which would be displeasing to some. Is there a way of arriving at a male heir by following their father's heritage? Robert takes us back to the Targaryens, who we know are all dead except for Daenerys, and she's out for being a woman. But her older brother Rhaegar was wed to Elia Martell, who had a son named Aegon; since Aegon and his mother were both murdered in the sack of King's Landing, the only way to find a male heir on that side of the family is by following Elia through her brother, Prince Doran of Dorne, to his son, Trystane. Wouldn't it be ironic if the tragic death of his beloved Myrcella eventually paved the way for Trystane to land on the Iron Throne?

Of course, all of this will be a moot point if Margaery is revealed to be pregnant next season. This is entirely possible, given the amount of sex she and Tommen were shown to be having before the queen was imprisoned. However, there's one major obstacle standing in the way of this option. In George R.R. Martin's books, Tommen is only nine or 10 years old when he becomes king, and the fact that he and Margaery have never had sex is a major plot point. Impregnating Margaery with a direct heir to the throne would therefore be a huge departure from the books, where that's literally impossible. And even if she was pregnant, if the child turned out to be a girl, we'd be right back where we started.

Up to this point, I've ignored the candidate with the most legitimacy, based on the fact that he's technically dead. But since you and I both know that's not really true (*wink wink, nudge nudge*), it has to be said: Jon Snow could very possibly become King of Westeros. Assuming that R+L=J is correct (which it obviously is at this point), then Jon actually has a more valid claim to the Iron Throne than his aunt, Daenerys — not only as a man, but as the son of Rhaegar, heir to King Aerys II. Of course, some will undoubtedly quibble about the fact that Jon is a bastard, born out of wedlock in an affair with Lyanna Stark. But I'm willing to bet most people will put aside those quibbles simply because Jon is a man with a strong claim who could put an end to any ongoing wars of succession. And the convenient fact that Jon "died" means that he's been released from his vows to the Night's Watch and is free to own land and claim titles once more. All hail King Jon!

Let's not forget that Robert Baratheon had children other than Joffrey, Myrcella, and Tommen; he sired countless bastards as well. Although most of those bastards were killed on Joffrey's orders, one managed to escape: Gendry. And since Gendry is actually descended from King Robert — unlike Joffrey or Tommen, who are products of incest between the queen and her brother — one could argue that, even as a bastard, Gendry's claim is stronger than Tommen's ever was. If some people would be willing to overlook the fact that Jon Snow is a bastard, then surely others would be willing to overlook the same in order to install Robert Baratheon's sole remaining genuine offspring on the throne. And no, not just because he'd be the hottest king EVER. (Although that certainly doesn't hurt.)

Now, if only we can find wherever Gendry rowed off to...