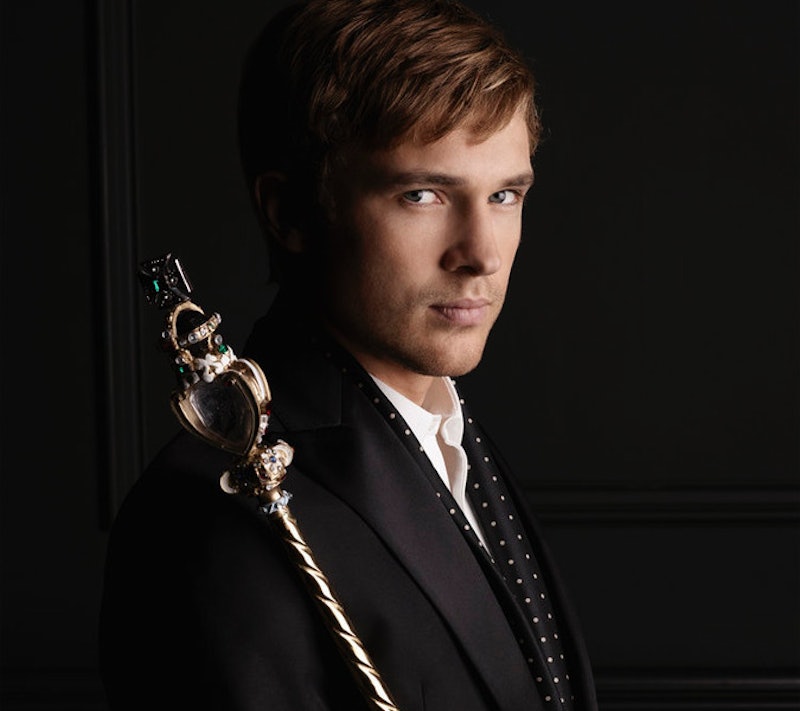 King Cyrus told his nephew Liam on the Jan. 3 episode of The Royals that every empire is built on blood. Yet if Liam ever becomes king on The Royals , he will change all that after learning about his family's murderous past. Liam's chances of changing monarchy history seemed to increase significantly in the episode "Be All My Sins Remembered," so Loyals (loyal watchers of The Royals) have reason to hope that Liam will be king one day.

While nothing about Liam's paternity was revealed in "Be All My Sins Remembered," the prince showed real strength and potential to be king in the Season 2 episode. After discovering that his grandmother had killed King Simon's love in order for her daughter/his mom to be queen, he told Helena, "Deal with your homicidal mother." He also demanded that Cyrus not make matters worse by seeking revenge on his grandmother since the Grand Duchess also presumably murdered his love, the maid Violet. His leadership was then put on display when he invited Dominique Stewart to the palace. He wanted to show Dominique what the royal family was really like behind closed doors, and she gave him the opportunity to speak his piece on video.

The video wasn't the first time that Liam showed that he's got the goods to be king since he eloquently spoke to the crowd at his father's memorial previously this season. And Liam made it clear (again) in the video that he's nothing like the current king, his ruthless Uncle Cyrus, and he also stated that he thinks there is a monarchy worth preserving.

It's all well and good that #KingLiam began trending on The Royals after his video went viral — and on real-life Twitter after the episode aired Sunday night. But to be king, you need to have the right blood line — not just public support. Well, since I'm a firm believer that Liam and Eleanor are actually Simon's children, I have faith that Liam is the rightful heir to the throne. Otherwise, I see no other logical way that Liam could ever be king. (Ah, but whoever said The Royals is logical?)

Luckily, the truth of Liam and Eleanor's paternity may be exposed sooner rather than later because Cyrus just revealed to the Grand Duchess and Helena that he has a male heir, thanks to his son with the maid Prudence. And I can't imagine that if Liam is actually Simon's son that Helena will keep it quiet for much longer, which means King Liam could soon become a reality.

More like this
How Is The British Royal Family Related To The Romanovs?
By Karen Fratti
How The Thanksgiving Episode Of 'Gossip Girl' Changed Pop Culture History
By Gabrielle Bondi
'Doctor Who's New Companion Has Been Winning Acting Awards Since She Was 18
By Shahed Ezaydi
A 'Grey's Anatomy' Alum Will Join Negan & Maggie's 'Walking Dead' Spinoff
By Alyssa Lapid
Get Even More From Bustle — Sign Up For The Newsletter